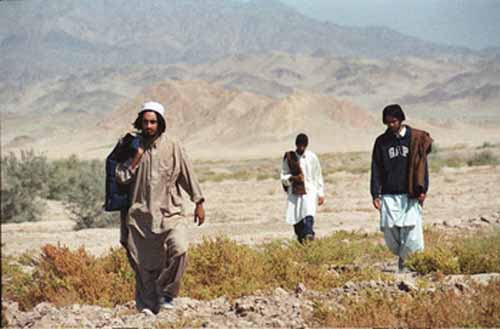 The Road to Guantanamo.

In Michael Winterbottom and Mat Whitecross’ docudrama The Road to Guantanamo, you won’t find the trio Bing Crosby-Bob Hope-Dorothy Lamour making merry with the natives of some tropical paradise or other. Instead, you’ll find a trio of young Englishmen of Pakistani descent making sorry decisions that eventually land them inside the walls of the U.S. military detention camps in Guantanamo Bay, Cuba, where they become the victims of the natives’ terror-inducing tactics.

Horror stories have been pouring out of the American Gulag since it began housing suspected terrorists following the U.S. war against the Taliban in late 2001. A mere couple of weeks ago, news reports announced that three Guantanamo inmates – none of whom had been charged with any crimes – had committed suicide by hanging.

In their film, Winterbottom and Whitecross attempt to document the horrors suffered by prisoners – whether innocent or guilty – at the hands of their American captors. Unfortunately, in spite of the filmmakers’ best intentions The Road to Guantanamo is an example of cinematic agitprop that tries – and ultimately fails – to have it both ways: It is supposed to be an entertaining political thriller with clear-cut heroes and villains, while posing as a factual account of recent events.

As a thriller, the film moves at a slow pace despite the choppy editing (by Winterbottom and Whitecross), the (inappropriate) use of music to heighten tension, and lots of shaky, hand-held camera shots that are supposed to bring a sense of immediacy to the proceedings. Compounding matters, the abrupt breaks between scenes and the going back and forth between the three lead characters – none of whom offers truly intimate recollections – makes for a very detached viewing experience. Worse yet, I couldn’t muster much sympathy for those men who, for no apparent good reason, chose to place themselves in the line of fire.

The trio, accompanied by a fourth friend who later disappears, traveled from England to Pakistan because one of them was about to get married to the woman of his mother’s choice. After hearing a local imam exhort his congregation to assist their fellow Muslims on the other side of the border – the U.S. and local Afghan groups were at war with the Taliban – the young men heed the call for help and cross into Afghanistan.

Now, are the British Midlands – their place of origin – located on Mars? Weren’t those men aware of the September 2001 terrorist attacks in New York City and Washington? Didn’t they know about Al Qaeda and the Taliban? Had they never heard of radical Islam? How did they think they were going to assist their fellow Muslims – with bread or with machine guns? Or did they really cross the border simply because they wanted to taste Afghanistan’s delicious nan?

The Road to Guantanamo never fully explains these men’s real motivations. Their story is told through interviews with the three surviving Englishmen, reenactments with non-professional actors, and news clips of ringmasters such as U.S. President George W. Bush and U.S. Defense Secretary Donald Rumsfeld (who manages to say – with a straight face – that “the treatment [of war prisoners] is proper … [and] consistent with the Geneva Convention – for the most part”). The problem is that by craftily blurring the line between fact and fiction, documentary and propaganda, directors Winterbottom and Whitecross do both their film and their viewers a disservice.

For instance, the filmmakers have opted to omit the screenplay credit – implying that what we see on screen is exactly what happened in real life. But being aware that the reenactments in The Road to Guantanamo are fiction, this viewer began wondering: Were the interviews themselves scripted? And why should we take those men at their word? (Making the blurriness more blurry was the fact that at times I couldn’t quite match the real-life talking head to the performer playing him in the reenactments. Some of the heavily accented dialogue also proved to be difficult to understand.)

Additionally, the brutality found in the reenacted Guantanamo sequences – though quite believable – is less shocking than anything I’ve seen on television newscasts or in photographs of Abu Ghraib. At times, fiction can’t quite reproduce the mind-boggling horrors of real life without diminishing their impact.

As far as I’m concerned, the most shocking thing in The Road to Guantanamo was the sight of animals slaughtered by U.S. and Northern Alliance bombings. (Unlike the human beings depicted in the film, those four-legged creatures had no choice but to be where they were.) As for the Guantanamo scenes – if they are indeed fully accurate – the most disturbing thing is not the dehumanizing treatment of prisoners, the merciless beatings, or the tarantula lurking in a tiny prison cell, but the sheer ineptitude of the U.S. investigators and military personnel whose duty is to rid the world of terrorists. (A touch of irony: While all the torturing and assorted abuses are going on, a detention camp plaque reads “Honor bound to defend freedom.”)

Ultimately, despite its many flaws The Road to Guantanamo offers four useful lessons:

While at a mosque in Pakistan, the quartet listen to an imam asking for assistance to their fellow Muslims in neighboring Afghanistan. That country – ruled by the radical Taliban – is now being bombed by the United States in retaliation for the September 2001 terrorist attacks on U.S. soil.

Heeding the imam’s call – and hoping to eat really big Afghan nan (the local bread) – the friends cross the border into Afghanistan. After bombings, misunderstandings (they don’t speak the local Pushtu language), and much diarrhea they – minus Monir, who has disappeared and is probably dead – are eventually captured by a group of ragtag anti-Taliban fighters known by the fancy name of Northern Alliance.

The friends are then taken into custody by the American forces, and flown to the U.S. military base in Guantanamo Bay, Cuba. Considered to be dangerous terrorists – though held without any charges – they are interrogated, verbally abused, and physically tortured.

After more than two years of incarceration, pressure from the British government – and the fact that British Intelligence showed that the Tipton Three (they had come from Tipton, in the English Midlands) were in England while Osama bin Laden was planning his attacks – help to set them free in March 2004. Upon their arrival in Britain, they’re interrogated again, but released without charges.

Asif is now finally able to get married to the woman of his mother’s choice in Pakistan.