“Imagine the scene in Casablanca in which the French patrons sing ‘La Marseillaise’ in defiance of the Germans, then multiply its power by a factor of thousands, and you’ve only begun to imagine the force of The Singing Revolution,” wrote Matt Zoller Seitz in the New York Times in his review of James Tusty and Maureen Castle Tusty’s documentary about Estonia’s struggle to end Soviet occupation in the late 1980s and early 1990s.

The curiously titled The Singing Revolution chronicles the history behind the little-known, nonviolent protests that began in the late 1980s in the small Baltic republic of Estonia, which had been annexed by the Soviet Union nearly half a century earlier.

With glasnost and perestroika, much had changed since Joseph Stalin’s iron-fisted days. As a result, hundreds of thousands of Estonians seized that opportunity to effect even more profound changes: their way to protest the Soviet occupation was by singing banned Estonian songs, a “singing revolution” that culminated – following other international events outside their control, including the fall of the Berlin Wall – in Estonia’s independence in 1991.

Filmmakers James and Maureen Castle Tusty (right) have kindly agreed to answer (via e-mail) a few questions for Alt Film Guide. See below.

Photos: Courtesy of the filmmakers 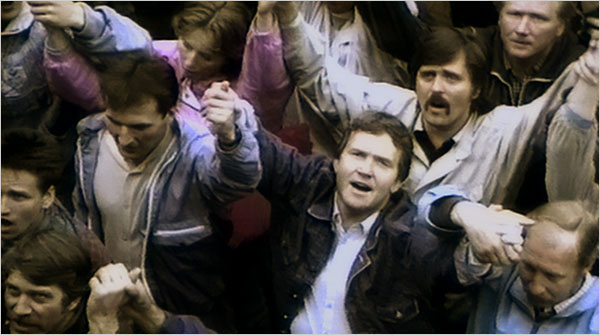 What made you decide to work on The Singing Revolution?

We taught filmmaking in Estonia in 1999 and 2001.  We sought out that opportunity based on Jim’s father being born in Estonia.  During those two semesters, we heard remarkable stories about what happened during the Singing Revolution.  We were amazed that we knew nothing of it.  We checked, and nor had our friends [heard about it].  We decided the story had to be told, and that we were obligated to do so.  If not us, who?  And if not now, when?

Could you elaborate a bit on what The Singing Revolution is about? And why that title?

What the Singing Revolution is about…

In 1991, after nearly fifty years of rule by a brutal Soviet occupation, the small Republic of Estonia confronted their occupiers by announcing their independence to the world. Their charge heralded the collapse of the Soviet Union and the freedom of now-suddenly-former Soviet republics.  It was the culmination of a 4-year, step by uncertain step, revolt.  At the core of this revolution was music.  As many as 300,000 Estonians would gather in a field to sing illegal songs of protest.  But they did this with a remarkable self-control, never giving in to anger despite some Soviet attempts to instigate trouble so that they would have the excuse needed to use extreme force. Many factors played a role in their non-violent success, but music is what unified the people and the various movements.

The title is based on the Estonian name for their revolution.  Artist Heinz Valk coined the term “Singing Revolution” in 1988 after a week of all-night singing protests that lasted until 5 or 6AM.  We toyed with many “clever” alternative titles; we toyed with many titles that may have communicated the theme more clearly … but we kept on coming back to the reality of “The Singing Revolution.”  If that was a good enough name of the revolution for the Estonian participants, it was a good enough title for our movie.

I’d heard of the “Velvet Revolution” of Czechoslovakia, but never of Estonia’s “Singing Revolution.” I believe I’m not alone. Why hasn’t Estonia’s story been told by the world media?

We get asked this a lot.  Of course, we’re not exactly sure, but have come up with three factors that may have played a role.  First, Estonia is a very small country.  It is rare that any news whatsoever from Estonia hits the international press.  This story is no different.  Second, the revolution was totally nonviolent.  No blood was shed during this four-year revolution.  That’s amazing.  That’s also not newsworthy on a day-to-day basis.  Had ten people been killed during a singing protest, the revolution would probably have made international news more often.  Third, Estonians really dislike braggarts.  We don’t know of many cultures that embrace bragging, but the Estonians take it to a whole new level.  They just don’t brag.  So it has not been their nature to talk up the amazing events that comprise the Singing Revolution. 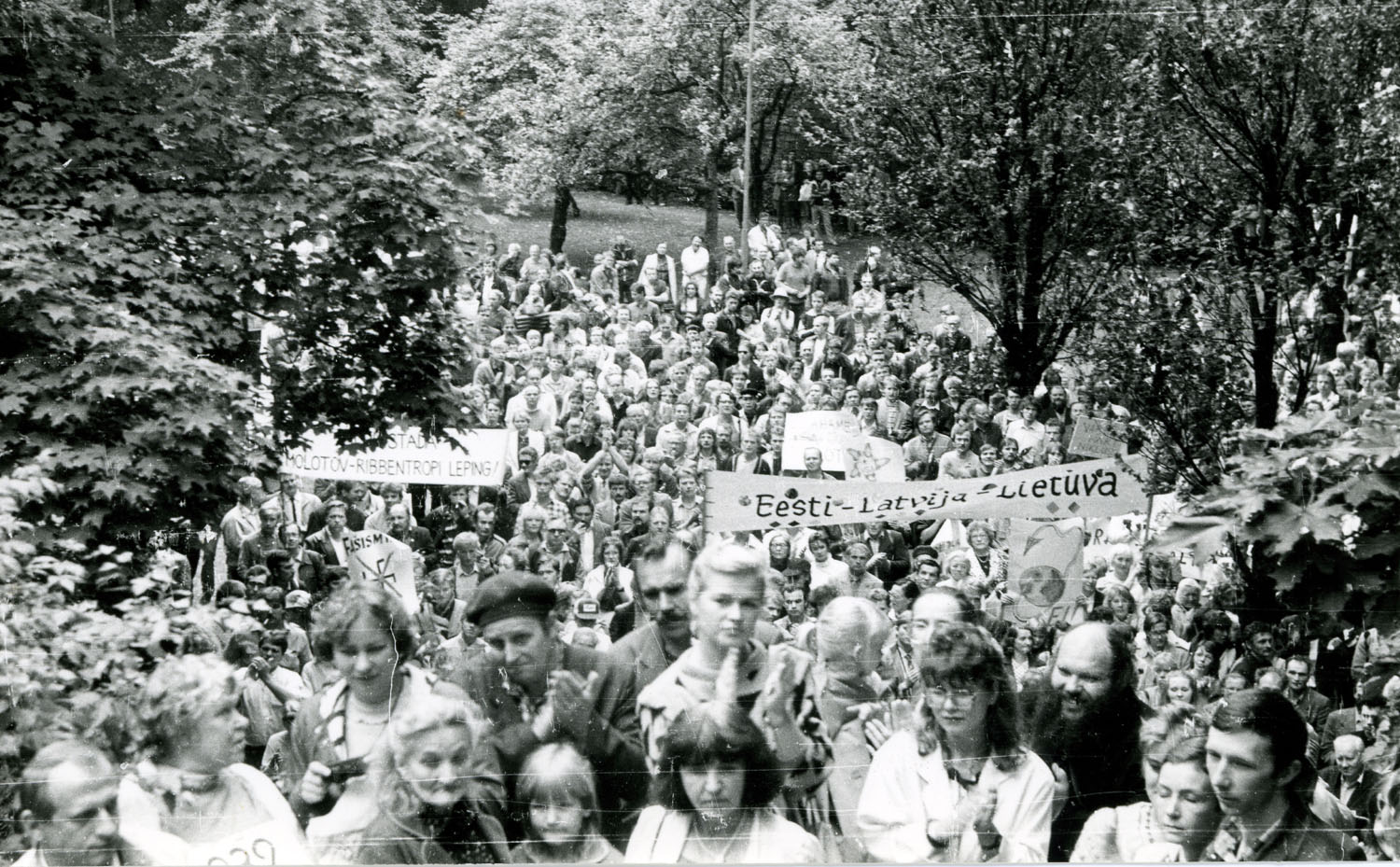 On the Singing Revolution website, there’s a line that caught my eye – the film was made to fulfill “the need to tell the world about war without violence.” Now, was Estonia’s independence a direct result of the “Singing Revolution”? If so, do you believe that could have happened – or could happen – anywhere else? [Above: 1987 Hirve Park Demonstration Crowd]

This is a very complicated question, and one that we continue to talk about ourselves to this day.  The Singing Revolution did not alone cause the collapse of the Soviet Union, but it played a very significant, if little known, role that we document in the film.  The Singing Revolution was a unique 4-year confluence of world events, strategic political moves and an entire nation standing up for itself.

Certainly, many circumstances have to be in place for freedom to happen. Had 300,000 people sung in protest in 1947 when Joseph Stalin was in charge, 300,000 people would have been killed or deported to Siberia.  Nonviolent revolution has to happen in a measured and well-timed way.  But the key is that the Estonians did act when the opportunity arose.  “Is today the day we can get away with it? Maybe we can do it tomorrow.  Maybe we’ll do it next week. No, today we do it…” That’s not an easy decision to make, especially when your livelihood, your family’s well-being, and maybe even your life is at stake.  Imagine all of us as Average Americans having to decide, “Today is the day I put my life on the line.”

This nonviolent revolution was more strategic in nature than philosophical, and we think this is key.  They not only avoided violence, but they equally thought out every step to insure that their actions were not only nonviolent but were advancing their cause.  That’s critical.  Nonviolence for its own sake can be ignored by totalitarian rulers.  We do believe there are lessons here that can be applied in other places and at other times, but not for all places and all times.  Nonviolent revolutionaries need to adapt the Estonian revolution to their own circumstances.  There has to be some level of a plan thought out, but most importantly, people have to decide, “Today is the day we act…..” 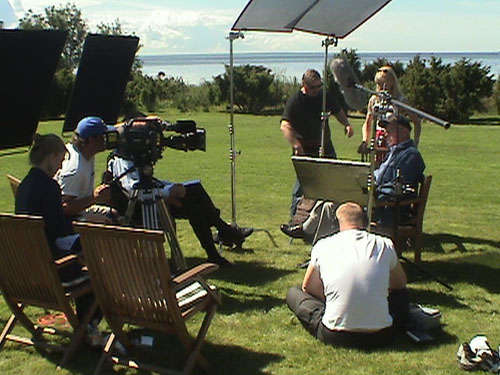 I understand that The Singing Revolution has been screened in Estonia. How was it received by the local media and Estonians in general?

We were worried that Estonians might justifiably say, “Who are you to tell us our history from 5,000 miles away, when you weren’t even here during those times?”  But instead, the overwhelming response has been to thank us for bringing some distance and perspective to the story.  For Estonians, this is current events.  For us, we explored the topic for four+ years with no preconceptions about what had happened.  We therefore could put together the pieces of the puzzle from scratch.  There is nothing simple about this revolution (one alternative title we considered was “The Complicated Revolution” …), and even our 97-minute film oversimplifies some aspects of the history.  But who would have the patience for the full story in one night?

Any other projects in the works at the moment?

We remain committed to telling this story.  We are focused on distribution, and are eager to personally present the film and discuss the history.  People from all sides of the political spectrum are amazed at what happened, and we want to continue the exploration of the “whys” and “hows.”  We think part of the appeal is that most people know nothing about Estonia or its history.  While a disadvantage in one way, it is an advantage in that people can watch this story with no preconceptions whatsoever.  If the film were about America, or France, or China, the entire audience would have presuppositions about everything they were watching.  When watching a film about Estonia, the pallet is cleansed and people can just internalize what they are watching and go wherever their instincts take them.  This is helpful for fresh thinking and discussion.

So we do have a few projects in the works, but for now The Singing Revolution remains our passionate focus.

11/may/2013
ref .Iris I still find things strange, the time lines do not seem to add up.
I shall keep looking but I now have the DVD “The Singing Revolution”
I can only think of one word to describe it Brilliant

Dear James &Maureen.
I would simply like to ask if you came across a film in your research -:
“Letters from the East (1996)”
The story is based on the life of Anna Kaleva, the part by Ewa Froling.
Various data-dases hold the details and a review but no release date.
I think there has to be some connection if only “The Human Chain”.
I keep coming to a dead-end at the moment.
I can but wonder “if “.
Hope you may be able help my search.
Malcolm.