The Talmadge Sisters Norma & Constance: Silent Era Stars Are Back! 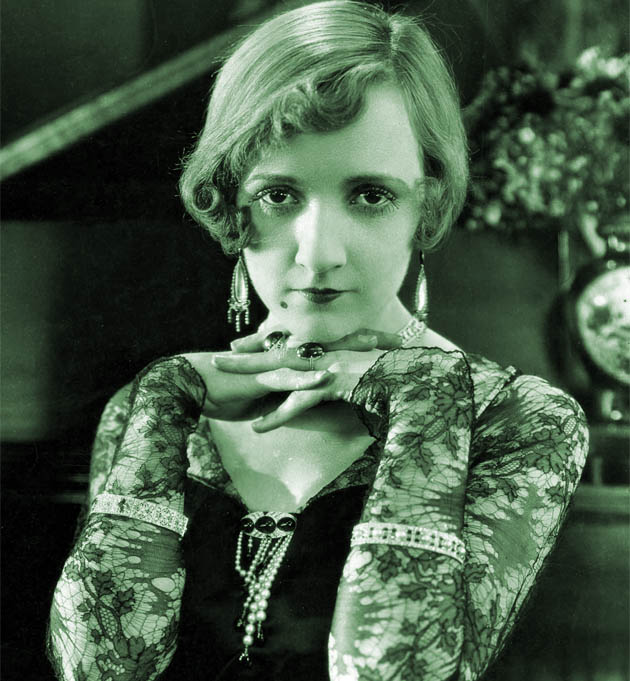 February 2007 will be Talmadge Sisters Month[1] at New York City’s Donnell Library Center Auditorium. As part of the library’s “Meet the Music Makers” series exploring the artistic symbiosis between the silent screen and live musical accompaniment, one Norma Talmadge comedy and three Constance Talmadge comedies/dramas will be screened, one per day, on four consecutive Wednesdays, beginning Feb. 7 at 2:30 p.m. Admission is free.

Made possible by the New York State Council on the Arts, and organized by the Donnell Media Center’s film historian Joseph Yranski, the series will present Norma Talmadge’s Kiki (1926), and Constance Talmadge’s The Dangerous Maid (1923), Her Night of Romance (1924), and Her Sister from Paris (1925).

All four films – to be screened from DVDs – have been recently restored by the Library of Congress, in cooperation with the Douris Corporation.

The musicians who will be accompanying the Talmadge sisters’ movies – and discussing their craft – are Bruce Loeb, Stuart Oderman, Judith Rosenberg, and The Biograph Players: Edward Hupton, Joe Kerr, and John Francis.

Married since 1916 to powerhouse film executive Joseph M. Schenck (1878–1961), the luxuriously gowned Norma, in particular, was revered among women, who could identify with her characters’ suffering through a whole array of tragic marriages and even more tragic love affairs.

Among Norma Talmadge’s career highlights were:

Constance Talmadge, on the other hand, was a popular light comedienne – and would have remained popular if only modern audiences were allowed to see her work.

In fact, her timing and looks feel as modern today as they did eight or nine decades ago, as can be attested in Sidney Franklin’s sparkling Lubitschesque comedy Her Sister from Paris, not coincidentally adapted (from Ludwig Fulda’s play) by frequent Ernst Lubitsch collaborator Hanns Kräly – who also wrote Her Night of Romance and adapted Kiki.

In Her Sister from Paris, Constance’s bourgeois Viennese wife pretends to be her more exciting and worldly Paris-based sister in order to win back the affections of novelist/husband Ronald Colman (who can also be seen in both Her Night of Romance and, as mentioned further up, Kiki). 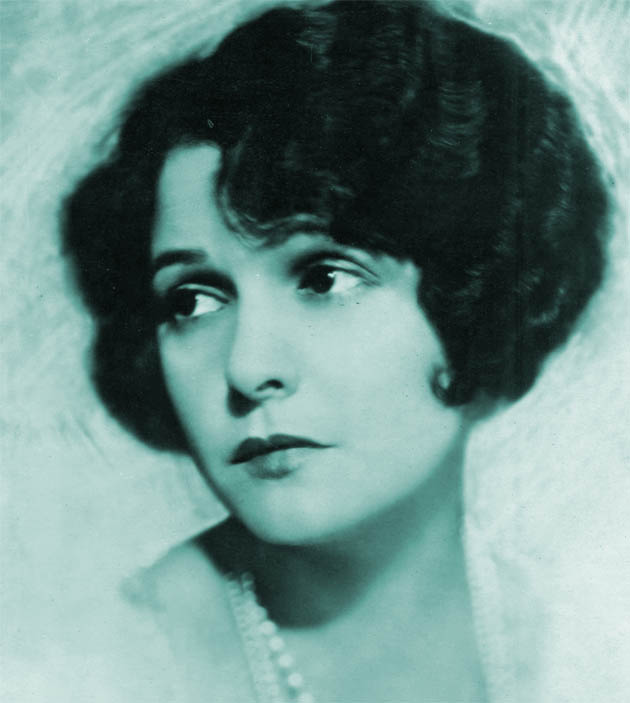 The Talmadge sisters: Norma Talmadge ca. 1925. From the late 1910s to the late 1920s, Norma Talmadge was one of the most popular film actresses on the planet, valiantly and elegantly suffering through heartbreak after heartbreak in star vehicles such as The Branded Woman, The Voice from the Minaret, Smilin’ Through, The Lady, Camille, and The Woman Disputed. Clarence Brown’s 1926 light comedy Kiki was one of her relatively few humorous showcases.

Following two decades in front of the camera, Norma Talmadge left films at age 36 after the 1930 box office disappointment Dubarry Woman of Passion.

Rumors about her voice being inadequate seem to be untrue. Other issues were apparently at work, including her impending divorce from Joseph M. Schenck, which would be finalized in 1934.

But forgotten or not, Norma Talmadge has a special place in the history of Hollywood – the Los Angeles suburb, that is. Hers were – accidentally – the first footprints immortalized in cement at Grauman’s Chinese Theatre on Hollywood Boulevard.

Unlike Norma, who did appear in a couple of talkies, Constance Talmadge – by then a wealthy woman – abandoned films without bothering to star in a single sound production. She was last seen in Louis Mercanton’s 1929 French romantic comedy Vénus.

Reportedly an alcoholic recluse in later years, Constance Talmadge died of pneumonia at age 75 on Nov. 23, 1973, in Los Angeles.

Not trendy = unworthy of attention

Appallingly, both Talmadge sisters – along with most of the silent era’s immense and diverse acting talent pool – have been all but ignored by the vast majority of film scholars, who have opted instead to drool over Lon Chaney, Louise Brooks, Charles Chaplin, Buster Keaton (who happened to be married to Natalie Talmadge, Norma and Constance’s less famous sister), and two or three other names.

When it comes to the Talmadge sisters, such disregard is particularly galling as a relatively large number of their – woman-centered – films have survived. For lack of interest, most lie unseen and unremembered in vaults at the Library of Congress and other institutions.

And that’s why the “Meet the Music Makers” series is such a treat. It’s a rare chance to learn more about the art of film scoring – Turner Classic Movies’ Young Composers should attend these screenings religiously – and to get acquainted with two of the top film stars Hollywood has ever produced.

[1] The Talmadge sisters never shared the screen as co-stars, though both were seen in Lloyd Ingraham’s 1916 mystery drama The Missing Links. Norma Talmadge was the star; Constance Talmadge had a supporting role.

Besides, if the IMDb is to be trusted, Constance had a cameo in Bruce Mitchell’s 1915 romantic comedy Captivating Mary Carstairs, toplining Norma. And both were featured in Van Dyke Brooke’s 1914 comedy short The Peacemaker.

Lastly, both Talmadge sisters had cameos as themselves in Alfred E. Green’s 1924 comedy In Hollywood with Potash and Perlmutter.

[2] Two of the Talmadge sisters’ films being screened at the Donnell Media Center were remade during the sound era: 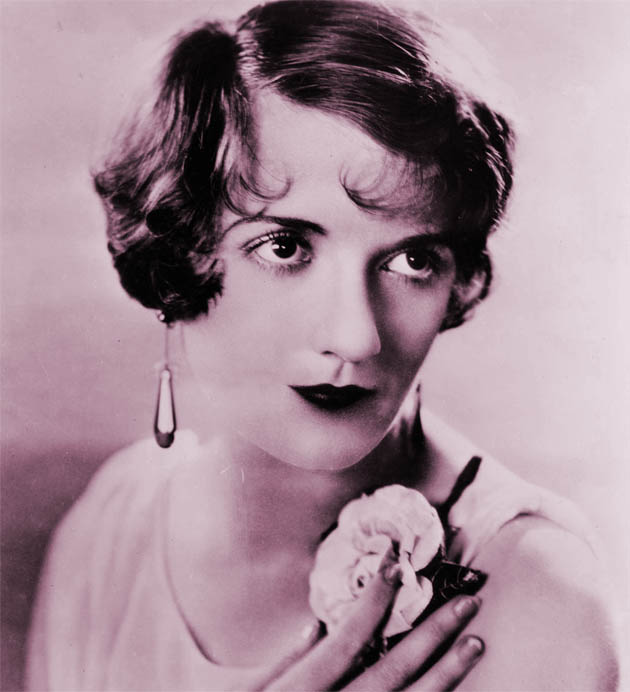 The Talmadge Sisters: Constance Talmadge ca. 1925. Although never as huge a box office draw as her older, brunette, superstar sister Norma Talmadge, the younger, blonde Constance Talmadge was a star in her own right. But whereas Norma became immensely popular suffering for love, Constance’s popularity rested on her bubbly performances in dozens of comedies, among them Romance and Arabella, A Virtuous Vamp, Wedding Bells, Her Night of Romance, Her Sister from Paris, and Breakfast at Sunrise.

The information below – regarding both the Talmadge sisters’ movies and their musical accompanists – is from the Donnell Media Center “Meet the Music Makers” press release.

The Program is subject to last-minute changes or cancellation.

‘Her Night of Romance’

An heiress in Her Night of Romance disguises her identity while traveling in England with her father. There she falls in love with an impoverished nobleman who is also in disguise. When it is discovered that they spent the night alone at his estate, they are forced to pretend to be married.

Bruce Loeb, a San Franciscan Bay native, studied voice, piano and harpsichord at U.C. Berkley and at conservatories in Holland and Israel. For twenty years he has been accompanying silent films at the Pacific Film Archives, using period music as the basis for his improvisations. In addition, he teaches piano in Berkeley.

The Dangerous Maid is a historical romance set during the reign of James II. Based upon the book Barbara Winslow – Rebel by Elizabeth Ellis, a daring English noblewoman attempts to save her kinsman just before “The Glorious Revolution,” when Catholics and Protestants were warring with one another.

New York City native Stuart Oderman has accompanied silent films for over 48 years appearing regularly at the Museum of Modern Art, the Brooklyn Public Library and the Gish Theatre at Bowling Green State University. Besides performing extensively throughout the United States, Canada and Greece, he has the added distinction of having been a personal friend of Constance Talmadge.

‘Her Sister from Paris’

Based upon Ludwig Fulda’s play Her Sister from Paris, in which a celebrated author loses interest in his faithful but frumpy wife. The arrival of her sophisticated twin sister who is a dancer/“woman of the world,” provides just the right impetus to mend the marriage and reinvigorate both spouses.

Judith Rosenberg is native to Brooklyn, with both her B.M. and M.M. in Performance from the Eastman School of Music. She is Artist/Lecturer and Music Director of the Dance Department at Mills College in Oakland, California. She has accompanied many of the country’s most prominent Modern Dance performers. Since 2001, she has begun to compose musical accompaniment for silent films.

One of Norma Talmadge’s rare comedic performances, Kiki is based upon the play by André Picard and adapted by David Belasco. A Parisian gamine desires to become a chorus girl and does succeed, but exchanges it for the love of the manager of the Follies.

The Biograph Players is a piano, synthesizer and percussion trio that utilizes film music and popular songs of the silent era, original compositions and improvisation to provide exciting accompaniment for silent films across the United States.

Edward Hupton, a native of Des Moines, founded the group and is a former member of the Bijou Players, and has composed music for public television.

San Antonio native Joe Kerr studied composition with Nadia Boulanger in France, and is coordinator of the summer music program at Fontainebleau.

John Francis from Bellaire, Ohio, has worked with the American Ballet Theatre and New York Chamber Symphony, as well as teaching in several music schools in New York.

The Talmadge sisters’ publicity photos, plus image of Constance Talmadge in Her Sister from Paris: Courtesy of the Joseph Yranski Collection.

I think it’s inappropriate to blame film scholars for the Talmadge’s lack of lasting fame. I’ve seen their work and quite frankly it doesn’t hold up. They are not as attractive and talented as you suggest. Furthermore, the silent stars that are membered today were multi-talented. They directed, edited, wrote, and acted in their own movies. The Talmadges were unable or unwilling to do this.