As part of the Academy of Motion Picture Arts and Sciences’ Douglas Fairbanks celebration, a fully restored print of the silent film version of The Thief of Bagdad (1924) will be screened on Dec. 15, at 7 p.m., at the Academy Theater in New York City.

The evening will feature live musical accompaniment by Donald Sosin, and the attendance of Douglas Fairbanks author Jeffrey Vance and co-author Tony Maietta, who will take part in a book signing following the screening.

Douglas Fairbanks at his peak

A Douglas Fairbanks movie in just about every way – he was the film’s star, producer, and story creator[1] – The Thief of Bagdad was officially directed by Raoul Walsh, at the time a former minor actor (he had played John Wilkes Booth in The Birth of a Nation) and the director of a well-regarded gangster drama, Regeneration (1915), and of programmers frequently featuring his wife, Miriam Cooper (Evangeline, Should a Husband Forgive?).

It’s unclear how much say Walsh had on the set of The Thief of Bagdad, but the film has a lot in common with the other Douglas Fairbanks star vehicles of the period – The Mark of Zorro, Robin Hood, The Black Pirate, The Iron Mask – and little in common with Walsh’s best-known work: crime/war dramas and Westerns such as The Roaring Twenties (1939), High Sierra (1941), Northern Pursuit (1943), Pursued (1947), and White Heat (1949).

Whoever was most responsible for the final product and despite its excessive length (about 2h30m), The Thief of Bagdad remains – easily – the most watchable Douglas Fairbanks star vehicle of the 1920s.

‘Happiness must be earned’

As found in Douglas Fairbanks, the superstar-producer wanted the thief to come across as “every young man of this age who believes that happiness is a quantity that can be stolen, who is selfish, at odds with the world and rebellious toward conventions on which comfortable human relations are based.”

Yet the initial title gives us the final moral of the story: “Happiness must be earned.” To win the princess’ hand, Ahmed must embark on a series of perilous journeys to recover the rarest of treasures while competing with her three other suitors.

Whether or not they agreed with the proposition that one has to work hard to be happy, audiences and critics at the time marveled at the film’s visuals.

The elaborate sets and special effects – not including Douglas Fairbanks’ acrobatics and his 3,654 sparkling teeth – were created by William Cameron Menzies, the production designer of Gone with the Wind. 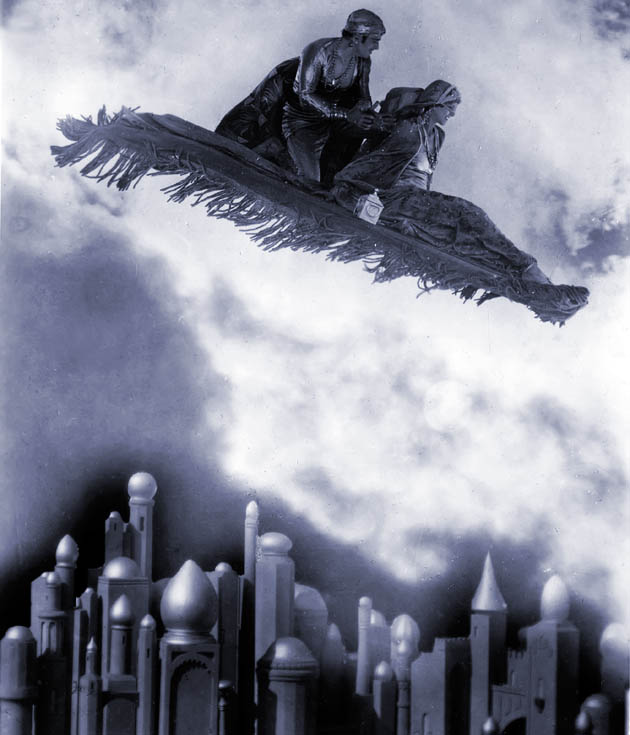 The Thief of Bagdad 1924 with Douglas Fairbanks, Julanne Johnston, and a magic carpet. As found in the book Douglas Fairbanks, Evelyn Brent (later of Underworld and The Last Command fame), was Fairbanks’ first choice to play the princess. Rumor had it that the actor-producer’s wife and United Artists co-founder, Mary Pickford, demanded that Brent be replaced. Either way, her substitute was dancer and minor film performer Julanne Johnston, who, unlike other Fairbanks leading ladies of the 1920s (Marguerite De La Motte, Enid Bennett, Mary Astor, Billie Dove, Lupe Velez), failed to enjoy much success in Hollywood.

Besides Douglas Fairbanks, Julanne Johnston, and Brandon Hurst, The Thief of Bagdad 1924 cast includes Snitz Edwards, Charles Belcher, Sojin (a.k.a. Sojin Kamiyama, the blind minstrel in Akira Kurosawa’s Seven Samurai), a pre-Shanghai Express Anna May Wong in a small role as a Mongol slave, and Mathilde Comont (as M. Comont) – pulling a Linda Hunt long before The Year of Living Dangerously – as the portly Prince of Persia.

British-based producer Alexander Korda was responsible for the 1940 remake. The sumptuous color release starred John Justin in the title role, in addition to June Duprez, Conrad Veidt, Sabu, and Rex Ingram (the black American actor, as opposed to the white Irish director) as a Shazzan-like giant genie. Three directors shared credit for The Thief of Bagdad 1940: Ludwig Berger, Michael Powell, and Tim Whelan.

Silent film historian Kevin Brownlow oversaw the restoration of The Thief of Bagdad 1924, which is supposed to reproduce the tinting hues of the film’s original release. The screening is made possible by arrangement with Photoplay Productions and Douris UK.

The Academy Theater is located at 111 East 59th Street in New York City. For more information, visit the Academy’s website.

[1] Although numerous sources give Achmed Abdullah co-scenarist credit for The Thief of Bagdad, he is nowhere to be found in Douglas Fairbanks.

The film’s writing/research credits in Vance’s book reads as follows:

Born Alexander Nicholayevitch Romanoff in Yalta, now part of Ukraine, Achmed Abdullah (1881–1945) was both a writer and screenwriter, sharing an Academy Award nomination for the screenplay of Henry Hathaway’s The Lives of a Bengal Lancer (1935).

In 1924, he authored a book version of The Thief of Bagdad. That seems to be the reason why he is so often credited for the film’s scenario.

Julanne Johnston and Douglas Fairbanks The Thief of Bagdad 1924 images: Courtesy of the Margaret Herrick Library.

The Birth of Hollywood + Early Film Version of The Wizard of...