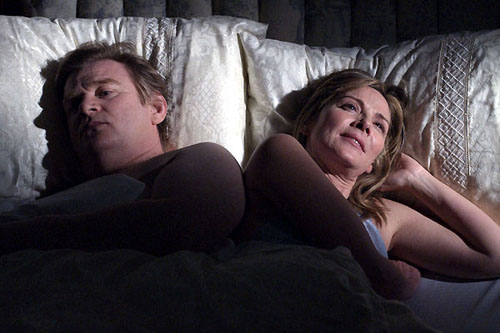 The Tiger’s Tail with Brendan Gleeson and Kim Cattrall.

One might initially be surprised to find that John Boorman’s latest film, The Tiger’s Tail, has all but gone straight to DVD in the United States. Surely the director of Point Blank, Deliverance, and Hope and Glory deserves at least the benefit of the doubt of a significant theatrical release? (Especially since his 21st-century output, particularly the 2005 drama In My Country, has been among his best work.)

But the film industry being what it is these days, The Tiger’s Tail probably has a better shot at an audience on home video than it does playing some cobwebbed, college-town independent theater. I suppose that’s how things are going to be from now on – at least for those of us who live in the boondocks – but no matter its release format, The Tiger’s Tail is worth tracking down.

Pre-release publicity simply summarizes the movie as being “about” Ireland – the “Celtic Tiger” – during its recent economic boom, which, as elsewhere, now appears to be something of a bust. But Boorman’s smart script works better as a farcical thriller than as a political diatribe.

Initially, we meet Liam (Brendan Gleeson), a successful developer in the midst of a struggle with the local government over his plans to build a gigantic soccer stadium. As is typical for poke-fun-at-the-bourgeoisie movies such as this, his wife (Kim Cattrall) is bored and materialistic, while his son (Briain Gleeson, real-life son of Brendan) is spoiled, muddle-headed, and largely ignored by his parents.

Soon, Liam finds himself stalked by a mysterious double (also played by Gleeson, and the occasion for plenty of Patty Duke Show-style effects), who is later revealed to be a lost twin brother. The twin, a down-on-his-luck plebeian, is at first content to annoy his sibling, but soon finds a way to usurp his position in both public and private life, leaving Liam to the tender mercies of the streets, shelters, and jails.

This is fairly outlandish stuff, but I admire the audacity behind it; Boorman gives his version of the class struggle a primal, mythic dimension by envisioning it as a manifestation of sibling rivalry. The Tiger’s Tail, in fact, is novelistic in its ambition, trying to be a tour of the whole of modern Irish society. To this end, we get scenes in a wealthy developer’s home, a homeless shelter, a crowded emergency room, a mental ward, a quiet rural shack, a busy main street on a Saturday night, and, in a well-crafted opening sequence, a traffic jam – a clever scene in which Boorman shows Liam observing his fellow motorists’ very human routines and reactions. A duller director would have simply served up another metaphor for the alienating character of modern society and called it a day.

Still, The Tiger’s Tail is a flawed movie. Whereas Boorman manages to hold the film’s focus in spite of its scope, an odd subplot involving Liam’s son becomes overly prominent toward the end. Also, quite a few howl-worthy lines of dialogue sneak in, with Liam’s son taking the prize here as well: on the phone with a character who asks where he is, he replies, “We’re in a story by Kafka, that’s where we are!”

Most distressingly, Boorman’s usually-impressive technical command of the medium appears to be slipping. Particularly in the movie’s first half, there are several instances of awkward and confusing staging, choppy editing, and performances that vary wildly in tone from one shot to the next. Worse, Boorman resorts to the rank amateur’s trick of using post-dubbed dialogue to explain on-screen action that would otherwise be perfectly clear to anyone with a pair of eyes.

But for all its faults, The Tiger’s Tail remains more interesting for its not-entirely-successful ambition than most films are for their perfectly realized modest goals. If I knew of a market for small, serious films for the home video consumer, I’d probably be selling my knowledge to DVD distributors rather than reviewing their products. But if there is, The Tiger’s Tail is just the kind of film that deserves a look by that (possibly hypothetical?) audience.