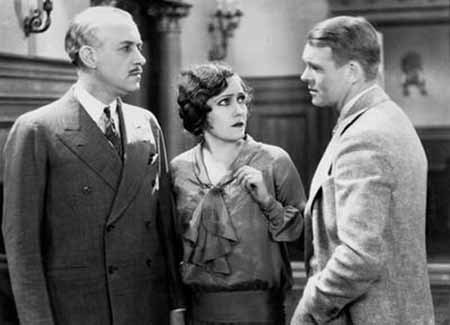 The Trespasser movie: Gloria Swanson stars in mother love melodrama with Purnell Pratt and Robert Ames, who would die two years after this film was made.

Author Cari Beauchamp will talk about the convoluted personal and professional relationship between actress Gloria Swanson and producer Joseph P. Kennedy in a program featuring highlights from her upcoming book, Joseph P. Kennedy Presents, on Thursday, Nov. 1, at 7:30 p.m. at the Academy of Motion Picture Arts and Sciences’ Linwood Dunn Theater in Hollywood.

A rare screening of Edmund Goulding’s The Trespasser, a 1929 melodrama produced by Kennedy (uncredited) and starring Swanson in her first talkie, will follow Beauchamp’s presentation. Admission is free.

According to the Academy’s press release, Joseph P. Kennedy Presents “offers the first serious look at Kennedy’s years as a film mogul, [drawing] on material in his recently released personal papers. Instrumental in the conversion from silent to sound films, Kennedy is the only man ever to run three film studios (FBO, Pathé and First National) and a theater circuit simultaneously.”

Perhaps the man had too few fingers in too many pies. First National ended up being acquired by Warner Bros. in 1928, while FBO and Pathé were amalgamated – with the backing of RCA – into what would become RKO. Kennedy was also one the people – Swanson was another – behind the Queen Kelly fiasco, director Erich von Stroheim’s costly exercise in megalomania that only received a few bookings – in heavily edited form – mostly in Europe and South America.

In The Trespasser, Swanson’s successful follow-up to the disastrous Queen Kelly, the actress stars as a stenographer who elopes with a rich guy (Robert Ames). (I haven’t seen the film, but I expect her to be the best-dressed, most heavily made-up working-class gal on the planet.) However, no matter how fashion-conscious the stenographer, the husband’s father (William Holden, no connection to the William Holden) has the marriage annulled.

Now pregnant, the dejected stenographer returns to her previous job. Worse yet, when the ex-father-in-law realizes he has a grandson, he wants the boy for himself, as the child will be the heir to the family fortune.

If this sounds like Madame X (there were a zillion versions of that one) or The Sin of Madelon Claudet, it’s no mere coincidence. People complain about today’s filmmakers not having any imagination. For the most part, that is true. But then again, that has always been the case. In fact, The Trespasser was remade eight years later by Goulding himself. That Certain Woman, beautifully produced but in dire need of a brain, starred Bette Davis and Henry Fonda.

For her performance, which includes some singing (“Love, Your Magic Spell Is Everywhere,” with music by Goulding and lyrics by Elsie Janis), Gloria Swanson earned her second Academy Award nomination. (She was nominated for Sadie Thompson in the awards’ first year. More than two decades later, she’d get her third nomination, for Sunset Blvd.)

Also in the cast of The Trespasser: D.W. Griffith veteran Henry B. Walthall, Kay Hammond (ghost wife #1 in David Lean’s Blithe Spirit), the irrepressible Mary Forbes, and, in a bit part, Stuart Erwin. Laura Hope Crews, Aunt Pittypat in Gone with the Wind, helped with both the written dialogue and the actors’ diction.

According to Matthew Kennedy’s Edmund Goulding’s Dark Victory, the Swanson-Kennedy partnership didn’t have much to celebrate despite the box office success of The Trespasser “With their affair growing icier by the day, Swanson and Kennedy went back to applying band-aids to their ailing Queen Kelly. It didn’t help their relationship that The Trespasser was more Swanson’s baby and Queen Kelly was more Kennedy’s.”

From the Academy’s press release:

The Academy’s Institutional Grants Committee selected Beauchamp as an Academy Film Scholar in 2004. This event will celebrate the upcoming release of Joseph P. Kennedy Presents (fall 2008). Beauchamp previously authored Without Lying Down: Frances Marion and the Powerful Women of Early Hollywood and edited Anita Loos Rediscovered: Film Treatments and Fiction.

Established in 1999, the Academy Film Scholars program is designed to stimulate and support the creation of new and significant works of film scholarship about aesthetic, cultural, educational, historical, theoretical or scientific aspects of theatrical motion pictures. Film scholars receive $25,000 to research and produce new works of film scholarship, which can take the form of books, multimedia presentations, curatorial projects, DVDs or Internet sites.

For grant guidelines and information about the Academy Film Scholars program, visit http://www.oscars.org/grants/filmscholars.

Admission to the Academy Film Scholars presentation is free, but tickets are required. Tickets are available by mail, at the Academy box office, or online at www.oscars.org. Doors open at 6:30 p.m. All seating is unreserved. The Linwood Dunn Theater is located at 1313 Vine Street in Hollywood. Free parking is available through the entrance on Homewood Avenue. For more information, call (310) 247-3600. 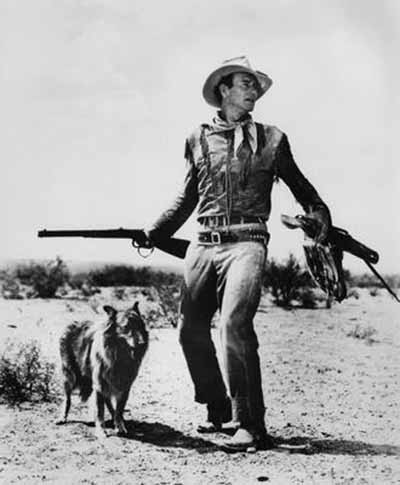 The Science and Technology Council of the Academy of Motion Picture Arts and Sciences will present “The Next Dimension: 3D and the Movies,” a look at 3D motion picture technology, on two consecutive Tuesday evenings.

The first presentation will feature film clips and live 3D demos on Tuesday, Nov. 6, at 8 p.m. at the Linwood Dunn Theater in Hollywood.

As per the Academy’s press release, “the event will reveal the mechanics and marvels of stereo vision, the proscenium arch, interocular distance and convergence, anaglyphs, active vs. passive glasses, and circular vs. linear polarization.”

The November 13 program will screen a 3D digital projection of Hondo. On hand will be special guest Gretchen Wayne, president and owner of Batjac Productions, the company founded by John Wayne and producer Robert Fellows in the early 1950s, and later owned and managed by Gretchen’s late husband, Michael Wayne, for more than 40 years until his death in 2003.

Based on the Louis L’Amour story “The Gift of Cochise,” Hondo was a sizable box office success in its initial 1953 release, but has rarely been seen in its original 3D format since. In the film, Wayne stars as Hondo Lane, a dispatch rider who attempts to protect an isolated rancher (Geraldine Page) and her young son from a marauding Indian tribe. For her performance, Page earned a Best Supporting Actress Academy Award nomination – her first out of eight Oscar nods.

By the way, L’Amour received an Academy Award nomination, but the nod was withdrawn after it was discovered that Hondo‘s story had initially been published in Colliers magazine the previous year. (That’s the problem with the credit “from a story by,” as the “story” oftentimes is actually an unproduced, drastically rewritten screenplay.) James Edward Grant, whose off-and-on collaborations with John Wayne extended from Angel and the Badman (1947) to Circus World (1964), was credited for the screenplay.

Location filming took place in Camargo, Mexico, under difficult conditions for all concerned. But as found in John Wayne: American, Geraldine Page was the one who had to deal with a specific type of unpleasantness.

One day “John Ford showed up suddenly on the set and observed Farrow shooting a love scene. He told Farrow that audiences would not believe that John Wayne on screen had fallen in love with such a homely woman. Farrow had the lines rewritten, requiring Page to say: ‘I know I’m a homely woman, but I love you.’”

Despite her Best Supporting Actress Oscar nod, Page would have an impossible time finding more film work, finding herself blacklisted as a result of her association with actress and acting coach Uta Hagen (the original Martha in Edward Albee’s Who’s Afraid of Virginia Woolf?).

“You wouldn’t believe what went on in those days,” Page would recall for the Chicago Tribune. “I went to see the Moscow circus and I worried that I would never be able to work again.  … Even though I was nominated for an Academy Award for Hondo, I wasn’t offered any kind of film role for seven years.”

Of note, John Farrow was the New York Film Critics Circle’s Best Director of 1942 for the World War II drama Wake Island, which also earned him his one and only Oscar nomination in that category. Fourteen years later, he shared the Best Adapted Screenplay Oscar – with James Poe and S.J. Perelman – for the Michael Anderson-directed blockbuster Around the World in 80 Days, based on Jules Verne’s 1873 novel.

Tickets to each of the Academy’s 3D events are $5 for the general public and $3 for Academy members and students with a valid ID.

Hondo is one of my all-time favorite movies. Of course I am a huge fan of westerns especially those of John Wayne and James Stewart.

Louis L’Amour had an excellent knack for writing action that translated well to the screen.