“It took three films,” says Kirk Honeycutt in The Hollywood Reporter, “but The Twilight Saga finally nails just the right tone in Eclipse, a film that neatly balances the teenage operatic passions from Stephenie Meyer’s novels with the movies’ supernatural trappings.”

Honeycutt then proceeds to laud David Slade’s direction (Catherine Hardwicke and Chris Weitz handled the previous two entries, Twilight and New Moon, respectively) and Melissa Rosenberg’s screenplay adaptation, concluding that Eclipse “looks primed to be the most successful film yet” in the Twilight Saga franchise.

Unlike Peter Debruge in his Variety review, Honeycutt openly praises the Eclipse leads as well.

Kristen Stewart “anchors everything with a finely tuned if not slightly underplayed performance”; Robert Pattinson “makes you forget the white make-up and weird eye contact lenses” to focus on a character torn between his love for the human Bella (Stewart) and the knowledge that she’ll have to let go of her beating heart if she’s to stay with him forever.

Honeycutt also proves himself an inveterate Team Jacob member, stating that Taylor Lautner “nearly steals the movie with his ripped muscle and steely acting.” He adds that Lautner “definitely has the ‘it’ factor Hollywood always looks for.”

Bryce Dallas Howard, who has replaced Rachelle Lefevre as the vindictive vampire Victoria, is described as “the epitome of sensual, feline cunning.”

Unsurprisingly (for anyone who has seen the numerous trailers and TV spots), Honeycutt calls Eclipse‘s visual effects and overall production values first-rate.

Very surprising is that a major plot element found in Eclipse reminded the reviewer of John Ford’s classic 1946 Western My Darling Clementine.

The Twilight Saga: Eclipse opens in the United States and about a dozen other countries – including Russia, South Korea, and Brazil – on June 30.

Directed by David Slade and starring Kristen Stewart, Robert Pattinson, and Taylor Lautner, The Twilight Saga: Eclipse has received a good review in Variety (subscription required to access the review), where Peter Debruge opines that “the pleasant surprise this time around is that the result finally feels more like the blockbuster this top-earning franchise deserves.”

Debruge goes on to praise Slade, for he “clearly understands how to work with actors while also demonstrating a welcome competence in the action and melodrama departments.”

Yet, the commentary contains no mention of the effectiveness of any particular performer. In fact, there’s no mention at all of Stewart, Pattinson, or Lautner, apart from having their names in parentheses next to those of the characters they play.

Author Stephenie Meyer gets put down a couple of times (e.g., “not much happens for the first 300 pages of Meyer’s novel”; “the poor scribe exhausts herself trying to find synonyms for ‘perfection’”), but screenwriter Melissa Rosenberg is commended for coming up with good moments not found in the “somewhat simple-minded source.”

The special effects and Javier Aguirresarobe’s cinematography also receive kudos, whereas the “bad make-up, lifeless wigs and creepy contacts [are] the elements that disrupt the fantasy.”

But wait. Aren’t those eyes supposed to be “creepy”?

Debruge concludes his first-paragraph summary with the following: “Summer release should reap Summit’s biggest yield yet.” (Curiously – and perhaps fortunately – the cliche about action scenes bringing in more guys into theaters is left unmentioned.)

Eclipse opens in the United States and about a dozen other countries on June 30.

The Twilight Saga: Eclipse reviews are in. The ones featured below are definitely more downbeat than the two positive ones from trade papers Variety and The Hollywood Reporter. (Some of the reviewers clearly haven’t read the book on which the movie is based – or if they have, they weren’t paying attention while reading it, e.g., not getting what the Volturi are doing near Forks.)

Eclipse opens tonight at midnight. Fans are already lining up.

After referring to Chris Weitz’s The Twilight Saga: New Moon as “dreadfully dumb,” The Associated Press’ David Germain goes on to say that “with returning screenwriter Melissa Rosenberg delivering her sharpest adaptation yet, Slade keeps the rather episodic story moving at a good clip, though things still bog down often enough in the same old routine.”

“In director David Slade’s hands, the story plays like two movies in one, neither being particularly well-made, whether it’s the would-be action horror of a brewing vampire-on-werewolf fight, or the endlessly talky Bella-Edward torpor. Slade was considered an unusual choice as director for this third chapter in the series, a guy who supposedly earned horror cred with the more violent vampire voyage 30 Days of Night. But he has plenty in common with the Twilight series: two previous features that were generally overrated by fans, and a knack for creating characters nowhere near as appealing as they need to be.” Luke Y. Thompson at E! Online.

“Things are looking up in Forks. The Twilight Saga: Eclipse, the third movie based on Stephenie Meyer’s sparkly-vampire romance books, is an improvement on the previous two films.” Sean P. Means in the Salt Lake Tribune.

“While director David Slade’s unnerving psychological drama Hard Candy (2005) was fascinating in its unpredictability, he is hampered here by Meyer’s leaden plot, adapted like the previous ones by Melissa Rosenberg. Early scenes have a gritty tension, but the rest of the movie, with its slow pacing and lackluster cinematography, doesn’t live up to that initial promise. … The huge contingent of girls — and women with girlish fantasies — who liked the first two movies will doubtless enjoy Eclipse. But this third go-round won’t make Twihard converts of the rest of us.” Claudia Puig in USA Today. 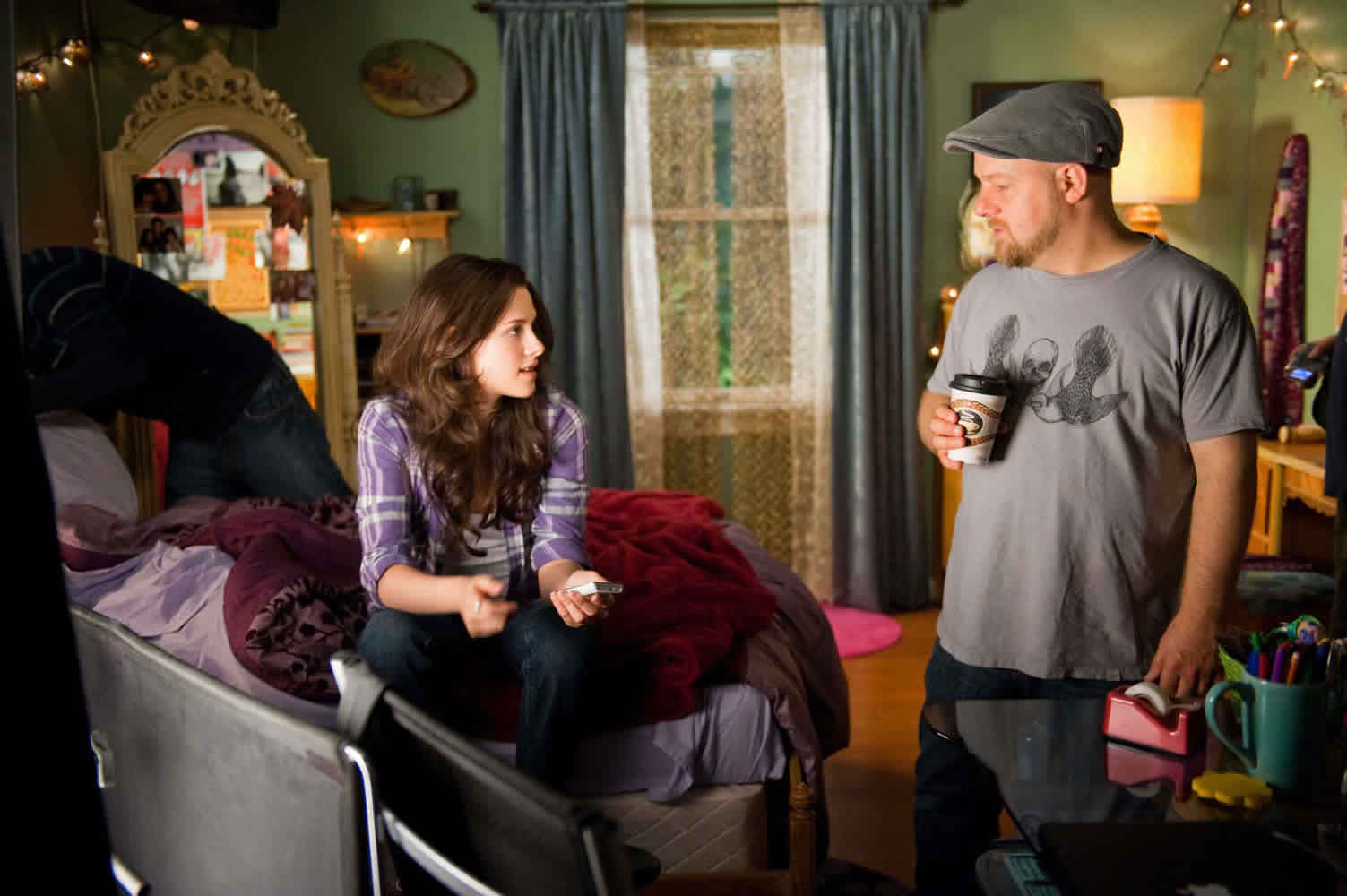 David Slade, whose The Twilight Saga: Eclipse has already broken several box office records and earned the Twilight Saga franchise’s best reviews, yet, was interviewed by TheWrap‘s Jordan Riefe. It’s a great, if brief, interview. Well worth checking out.

Slade doesn’t talk about working with Robert Pattinson, Kristen Stewart, or Taylor Lautner, but he discusses the director’s role in Eclipse (“It’s not director-proof. I don’t believe anything’s director-proof”), conferring with author Stephenie Meyer (“She would come in, and she would be an advisor. … But we knew there wasn’t time for a lot of discussion”), and conferring with the Summit Suits (“You can get every single person who needs to make a decision at Summit into the bathroom. So it’s not as many as you think”).

Slade adds that there may be a director’s cut of the box office underperformer 30 Days of Night out on DVD, which he promises will be darker than the version released in theaters.

Here’s a brief (and funny) exchange:

What did they [Summit] want input on?

Largely big general points like, “Don’t make Edward ugly in this scene. Make sure he’s not in the sun because he should sparkle.”

I wish Riefe had asked if there’ll be a DVD release featuring a darker director’s cut of Eclipse as well.

All right, I’m going to make this short and sweet. “The Twilight Saga: Eclipse” has got to be one of the best movies I’ve ever seen and I’ve seen A LOT of movies.

Kristen Stewart is the only one getting consistent reviews. The New York Times review basically said she was the best part. Everyone seems to agree that Robert Pattinson is little more than pouty lips and white makeup. I even saw many good reviews for Taylor, but no mention of Robert at all. Some did talk about Edward Cullen, but failed to converse about the actor that played him. Billy Burke got more props.

I only go see this crap because I’m a Kristen fan so I’m happy. I get to see her and I don’t have to think too much. It’s all good with me.

In another review on Imdb,you can go there and read it said taylor was really bad and three other reviews were the same exact reviews,go figure. same old thing,except most people dont think taylors is the x factor,i understand that theres a lot of actors and most of them are the x factors.

yeah this review is a joke. this is the same source who said that melissa rosenberg’s scripts arent what was wrong with the movies.

that leaves me wondering, if every author of the negative reviews has actually seen the movie. more and more great reviews are surfacing. by now it seems to me that some of the imdb reviews are fakes, or written by people who went into the screening with an already dead set mind that it was going to be bad, or desperately WANT the movie to be bad and are not even trying to be objective?!
it’s not a secret that the actors are unexperienced, and the budget was not too big. after a long hard day’s work all i want to do is to enjoy a movie that allowes me to dive into a different world for a while, without übercritizising it. as long as it doesn’t get me bored, i have no problems with a movie not getting an oscar nomination.

That’s a great review for the actors and the movie. Can’t wait to see it. Eclipse is my favorite book with my favorite chapter “Fire and Ice” a.k.a. the tenth scene.