Theodore Bikel: From Fiddler on the Roof to Star Trek

Folk singer, social and union activist, and stage, film, and television actor Theodore Bikel, best remembered for starring in the Broadway musical The Sound of Music and, throughout the U.S., in Fiddler on the Roof, died Monday morning (July 20) of “natural causes” at the UCLA Medical Center in Los Angeles.

The Austrian-born Bikel – as Theodore Meir Bikel on May 2, 1924, in Vienna, to Yiddish-speaking Eastern European parents – was 91.

Thanks to his well-connected Zionist father, six months after the German annexation of Austria in March 1938 (“they were greeted with jubilation by the local populace,” he would recall in 2012), the 14-year-old Bikel and his family fled to Palestine, at the time a British protectorate. While there, the teenager began acting on stage, eventually becoming one of the founding members of the Cameri Theatre in Tel Aviv.

As World War II came to an end in 1945, Bikel moved to London to study at the Royal Academy of Dramatic Art. Upon graduation in 1948, he decided not to return to Israel, then in the throes of the Arab-Israeli War. “A few of my contemporaries regarded [the decision] as a character flaw, if not a downright act of desertion,” he would write in his 1994 autobiography, Theo.

At the recommendation of Michael Redgrave, in 1949 Laurence Olivier hired Theodore Bikel to play the minor, poker-playing character Pablo in Tennessee Williams’ A Streetcar Named Desire, which Olivier was directing at the West End’s Aldwych Theatre. Bikel was also to understudy for the play’s two key male characters: Stanley Kowalski (Bonar Colleano) and Mitch (Bernard Braden).

Eventually, Bikel got to play Mitch onstage, and at times he went on as Kowalski, thus getting the chance to co-star opposite Olivier’s wife Vivien Leigh as Blanche DuBois and his Henry V leading lady Renée Asherson as Stella.

After nearly a decade in the U.K, where he was also featured in small roles in several movies (more on that below), in 1954 Bikel relocated to the United States, where, the following year, he made his Broadway debut in Jacques Deval and Lorenzo Semple Jr.’s short-lived play Tonight in Samarkand, with Louis Jourdan.

Later in 1955, he was one of the leads in the prestigious Joseph Anthony-directed staging of Jean Anouilh’s The Lark, adapted by Lillian Hellman. His co-stars were Julie Harris, Boris Karloff, Christopher Plummer, and Joseph Wiseman.

Two years later, he received a Tony Award nomination as Best Featured Actor in a Play for his performance in Morton Wishengrad’s The Rope Dancers, directed by Peter Hall, and toplining Art Carney, Siobhán McKenna, and Joan Blondell. (Bikel lost the Tony to Henry Jones in Sunrise at Campobello.)

Below: Theodore Bikel singing ‘Edelweiss’ from ‘The Sound of Music.’

The Sound of Music + a couple of musical flops

Not long after his Tony nomination (and his Oscar nomination for The Defiant Ones; see further below), in Nov. 1959 Theodore Bikel landed the role of Captain Georg von Trapp in the original, Tony-winning Broadway production of Richard Rodgers and Oscar Hammerstein II’s The Sound of Music (book by Howard Lindsay and Russel Crouse).

As Captain von Trapp, Bikel introduced the song “Edelweiss,” reportedly composed for him during the musical’s final off-Broadway try-outs. For his efforts, he received a second Tony nomination – this time as Best Featured Actor in a Musical. (He lost to Tom Bosley in Fiorello!.)

Theodore Bikel, however, was bypassed for the 1965 film version of The Sound of Music. The more conventionally handsome Christopher Plummer (Bikel’s fellow The Lark player) got to play Captain von Trapp in the Robert Wise-directed worldwide box office phenomenon and multiple Oscar winner. Julie Andrews (as Maria) and Eleanor Parker were Plummer’s co-stars.

The year before The Sound of Music was released on the big screen (and the year after it had closed on Broadway), Bikel was seen in the Broadway bomb Café Crown, a musical comedy – also featuring Sam Levene and Alan Alda in a small role – that closed after three performances in April.

Bikel was no luckier with the musical Pousse-Café, with book by Jerome Weidman and music by Duke Ellington, which closed after only five performances in March 1966.

More than a dozen years later – and hundreds of performances in Fiddler on the Roof elsewhere in the U.S. – he was once again seen on the Broadway stage in a fall 1978 revival of Nikolai Gogol’s The Inspector General, which ran for 69 performances at the Circle in the Square Theatre. That marked Bikel’s final Broadway appearance. 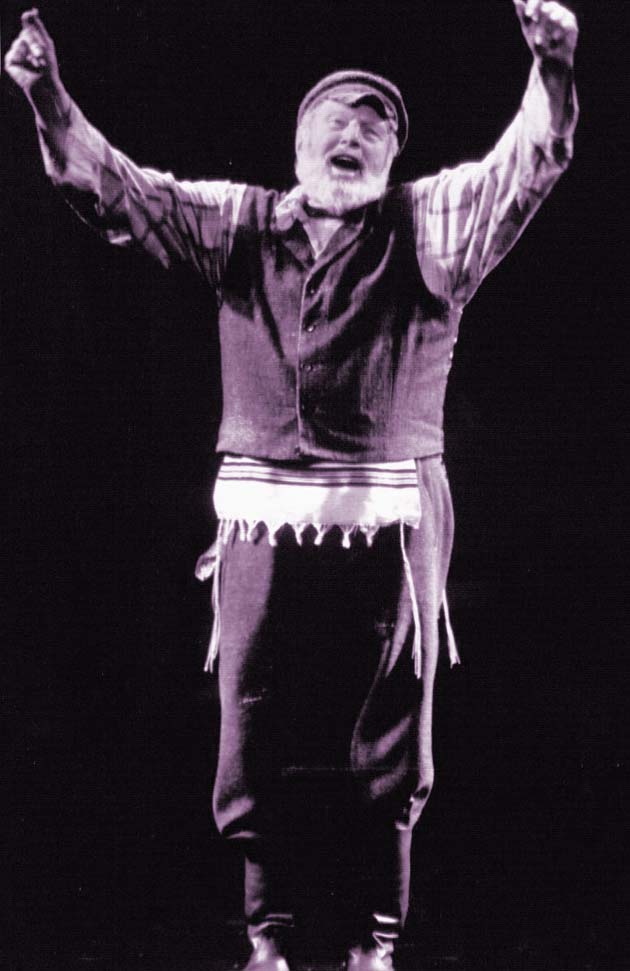 Theodore Bikel in ‘Fiddler on the Roof.’

Fiddler on the Roof: Way off Broadway

Curiously, although closely associated with the role of Tevye in Jerry Bock and Sheldon Harnick’s musical Fiddler on the Roof (book by Joseph Stein), Theodore Bikel never played the part on Broadway. (Zero Mostel had originated Tevye in 1964.)

At the suggestion of Harry Belafonte, Bikel first incarnated the singing Jewish-Russian milkman at Las Vegas’ Caesar’s Palace in 1968. A reported 2,200 performances throughout the U.S. would follow in the ensuing years.

I was sitting there during the first scenes and thought to myself, “What is Theo doing? What is this bare-bones performance he is giving?” By the second act, I saw you were stripping the role of shtick and playing the essence so real, so genuinely, that I who had seen the show hundreds of times started to cry.

Norman Jewison directed Israeli actor Chaim Topol – who had starred in the original West End production – in the 1971 film version that won three Academy Awards, in addition to five other nominations, including Best Picture and Best Actor.

As recently as February 2012, Bikel was acting on stage. He played the widower Mr. Green, convalescing after being hit by a car, in Jeff Baron’s Visiting Mr. Green, performed by the Harold Green Jewish Theatre Company in Toronto. (Eli Wallach had originated the role in 1996.) 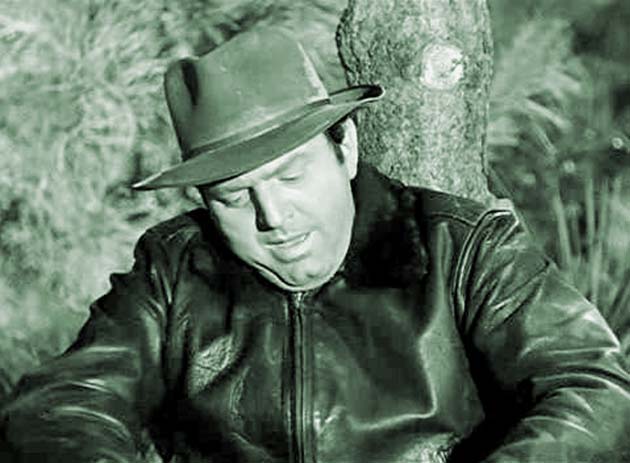 Theodore Bikel in ‘The Defiant Ones.’

According to the IMDb, Theodore Bikel made his film debut as an extra in Ralph Thomas’ British-made, 1951 World War II comedy-drama Appointment with Venus / Island Rescue (1951), toplining David Niven and Glynis Johns.

That same year, Bikel was cast as a German naval officer in John Huston’s critical and box office hit The African Queen, starring Humphrey Bogart (“he seemed so laid-back, laconic … until he got on the set”) and Katharine Hepburn (“an aristocrat, but … kind to all the people around her like all the good aristocrats are. Like the good people in Downton Abbey”).

In 1952, he was King Milo IV of Serbia in another prestigious Huston effort, Moulin Rouge, featuring José Ferrer (as Henri de Toulouse-Lautrec) and the recently deceased Colette Marchand (dead at age 90 last June 5).

From then on up to the mid-’50s, Bikel was kept busy in mostly small roles – whenever a German- or Eastern European-accented character was needed – in British films (e.g., Melba, The Little Kidnappers, The Colditz Story) and, at times, in Hollywood productions set in Europe (e.g., the Clark Gable thrillers Never Let Me Go, with Gene Tierney, and Betrayed, with Lana Turner and Victor Mature).

Theodore Bikel’s first important role in a major, U.S.-set Hollywood movie was in Stanley Kramer’s The Defiant Ones (1958), written by Harold Jacob Smith and the blacklisted Nedrick Young (under the pseudonym Nathan E. Douglas).

A modestly budgeted sleeper hit about racism in the still segregated American South, this much too well-intentioned drama starred Tony Curtis and Sidney Poitier as a couple of escaped prisoners shackled together. As small-town sheriff Max Muller, who maintains a modicum of humanity while hunting down the fugitives, Bikel was hailed as “most impressive” by the New York Times’ Bosley Crowther.

The Defiant Ones went on to receive eight Academy Award nominations, including Best Picture, Best Actor (both Curtis and Poitier), Best Director, Best Original Screenplay, and Best Supporting Actress (Cara Williams). Bikel was shortlisted in the Best Supporting Actor category; somewhat ironically, he lost to another folk singer, Burl Ives, who had been featured in William Wyler’s The Big Country.

Sometime after an unarmed, 18-year-old black man, Michael Brown, was shot dead by a police officer in Aug. 2014 in Ferguson, Missouri, Bikel was interviewed on YouTube’s Mr. Media channel. When asked whether anything had changed in regard to ethnic relations in the U.S. since the mid-20th century, he replied (see video interview further below):

The answer is Yes and No. There have been changes. Obviously, there have been advances. There have been incredible advances. Who would have dreamt that a black man would be sitting in the White House and be our president. Or that we’d have an Attorney General … who’s a black man. There are advances. And yet, as the French say, “The more it changes, the more it remains the same.” Unfortunately, as the protesters in the street will tell you with their placards, we still have to march and we still have to say “Black lives matter.” That is such a sad commentary on our world. 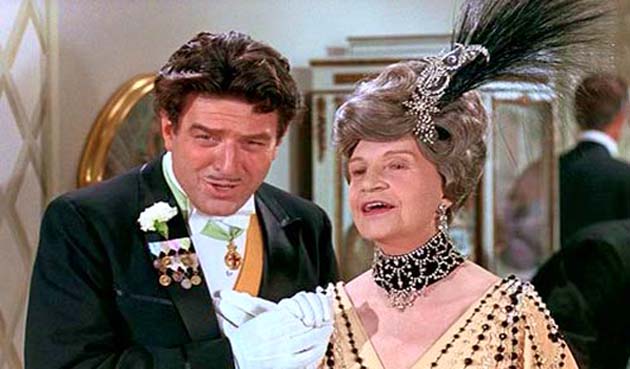 Theodore Bikel in ‘My Fair Lady,’ with Lillian Kemble-Cooper.

Theodore Bikel was seen in about 50 movies. Besides The Defiant Ones, his most notable film appearances include:

Additionally, Theodore Bikel was tested for the title role in Guy Hamilton’s James Bond movie Goldfinger (1964), but the part eventually went to Gert Fröbe. Bikel’s screen test can be seen on the Goldfinger “Ultimate Edition” DVD, which came out in 2006.

And in 2014, he was busy promoting the documentary Theodore Bikel: In the Shoes of Sholom Aleichem, which he cowrote with John Lollos (who also directed) and Marsha Lebby. Alan Alda narrated.

Theodore Bikel Fiddler on the Roof image via the Bikel website.

Theodore Bikel The Defiant Ones image: United Artists, via The Sill of the World.

Norman Mailer: ‘The Naked and the Dead’ & ‘Marilyn’ Author