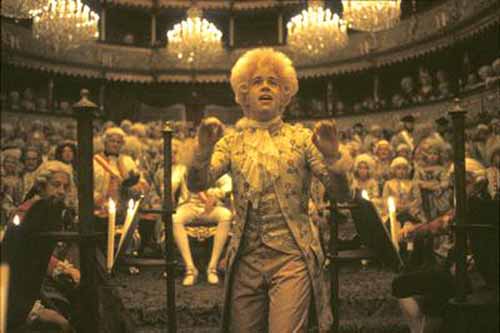 Tom Hulce and F. Murray Abraham were both shortlisted for the 1984 Best Actor Academy Award for their work in Milos Forman’s Amadeus. Abraham was the eventual winner.

Milos Forman’s sumptuous 1984 Oscar-winning drama Amadeus will be screened as part of the Academy of Motion Picture Arts and Sciences’ “Monday Nights with Oscar” series on July 16, at 7 p.m. at the Academy Theater in New York City. Following the screening, Forman, actors F. Murray Abraham, Tom Hulce and Christine Ebersole, and production designer Patrizia von Brandenstein will take part in an onstage discussion.

Shot on location in Prague, Amadeus revolves around a highly fictionalized version of the relationship between 18th-century composers Wolfgang Amadeus Mozart and Antonio Salieri. Forman’s film adaptation from Peter Shaffer’s Tony Award-winning play is a feast for the eye, and even though I wouldn’t say it fully succeeds as an exploration of the divine within, it does offer a handful of excellent performances (Abraham, Elizabeth Berridge, Jeffrey Jones) and some of the drama is quite affecting. Less so, however, is Tom Hulce’s childlike Mozart, who displays none of the inner darkness the role required.

“Monday Nights with Oscar” is a monthly series showcasing high-quality prints of films that have been nominated for or won Academy Awards. This screening will feature a newly struck print from the Academy Film Archive.

The Academy Theater is located at 111 East 59th Street in New York City. Tickets for the screening are $5 for the general public and $3 for Academy members and students with a valid ID. Tickets may be reserved by calling 1-888-778-7575. Depending on availability, tickets may be purchased on the night of the screening. Doors open at 6:30 p.m. All seating is unreserved. 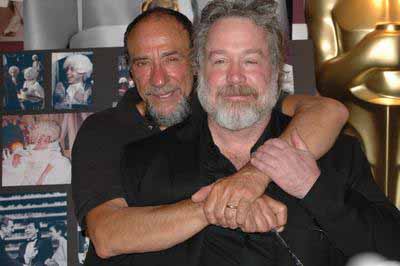 July 19: Amadeus director Milos Forman, and the film’s two stars, Tom Hulce and F. Murray Abraham, attended the Academy of Motion Picture Arts and Sciences’ presentation of the multiple Academy Award winner on July 16, 2007, at the Academy Theater in New York City. The Amadeus screening was part of the Academy’s film series “Monday Nights with Oscar.”

As Wolfgang Amadeus Mozart, Tom Hulce was shortlisted in the Best Actor category, but lost to Abraham’s envious Antonio Salieri.

F. Murray Abraham, who’ll be turning 68 next October 24, has been featured in nearly 60 movies going all the way back to a bit part in the 1971 George C. Scott / Joanne Woodward mystery comedy They Might Be Giants. Besides Amadeus, Abraham’s film career peak, he was seen in Jean-Jacques Annaud’s The Name of the Rose (1986), opposite Sean Connery; John McTiernan’s Last Action Hero (1993), starring Arnold Schwarzenegger; and Woody Allen’s Mighty Aphrodite (1995).

Kellan Lutz Hercules Movie Is Critical Catastrophe + ‘Montezuma’: Castle in the Air or Next...

I’ve seen Amadeus about a half a dozen times, and Tom Hulce’s portrayal is what kept me rewatching.

The two are incredible actors, the performance they gave to us is just out of this world, I respect them so very much.

I saw for the first time Amadeus a couple of weeks ago, I didn´t know anything about the movie, I just saw it randomly. At the end, I couldn´t stop thinking about it: this movie stayed in my heart and mind for good.

A few days ago, for the magical coincidences in life, I found out Amadeus was an Oscar winner movie in 1985 and since that day I´m obsessed with anything related to it.

I hope someday I can meet Tom Hulce and see him smile, I don´t care how old he´s going to be, I think I will able to see through him Mozart laughing again :)

hi I just wanted to say,some people to stop spreading lies about Tom sexuality..Tom was asked by reporter,what he thought that he was on lists among gay actors,Tom answered he was comfortable about it,he never said he was gay,and never admit that,he just say it never mind to him,he was comfortable,I am very good friend of him ,and know him well,he is pretty much attracted by women

tom just answered about question how he feel,he was among openly gay actors,he said comfortable,but he never said he was gay,…some people just didnt see him,and i met him perhaps 4 times and he is surely not gay,he was absolutely flirting guy,

So its not a Robin Williams trick??? Totally unexpected???

Uh….we all new Tom was gay when this movie came out for god’s sake. ARE you people living under rocks, or is your gaydar really that bad…..?

I am a spanish girl called Elena, my biggest wish will be to meet Tom HULCE I am in love whith him, before I die could I meet you Tom?
I really hope
writte to me hulce please!!!!
lots of love
Elena

he was an absolute hunk back in the 80s/90s! what happened? of course everyone grows old someday…its kinda annoying cos he was really, really gorgeous! he still is i guess but more in a compact way now- he’s still got his beautiful, unique voice! :P

I was stunned when i saw AMADEUS! he should have got that “best actor” award instead of F.Murray Abraham! he is such a good singer and an AWESOME musician! he is my idol- always has been and always will be!
LUV YOU TOM!! XXXXXXXXXXXXXXXXXX

I think Tom Hulce is even hotter now. He became a gorgeous and sexy bear. I hope he’s gay.

I like so much Tom Hulce! is a one of my favourite actors I was amazed in Amadeus!:D

I’ve always loved this film. An exquisite film with lush production values. Mozart’s such a long ago figure, it’s probably impossible to ever completely know or understand the man behind the sublime music. No first hand eyewitnesses are left to accurately describe him. So much of this is conjecture. Taking whatever existing evidence is left and trying to form a picture of the man. Because he lived before the days of photography, even paintings are misleading. Some paintings I’ve seen of Mozart depict a rather attractive young man. Others depict a short, stocky, rat-like figure. Although, indeed where history begins and movie poetic license begins is questionable.

At any rate a fine film and F Murray Abraham is the standout. And if you’re a fan of classical music/opera the film is simply scattered with familiar and sublime musical gems. You could simply enjoy and appreciate the film for that alone.