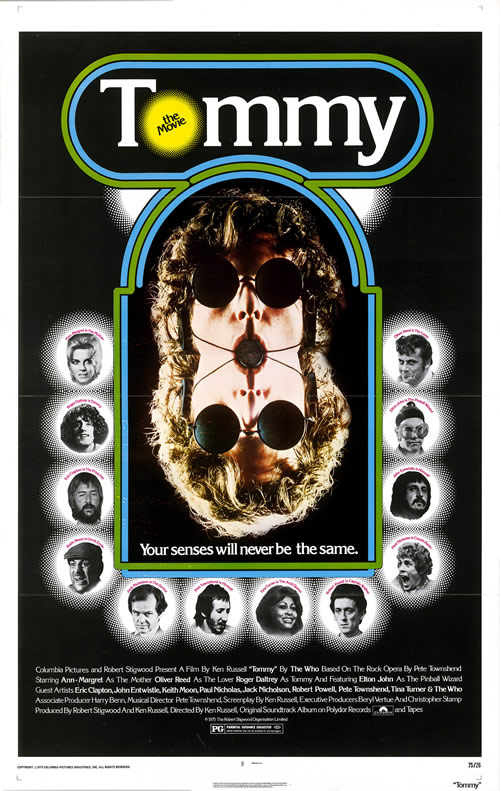 Ken Russell’s 1975 film from The Who’s rock opera Tommy, starring Roger Daltrey, Ann-Margret, Oliver Reed, and featuring the likes of Elton John, Eric Clapton, Jack Nicholson, and Tina Turner, will be screened at the Academy of Motion Picture Arts and Sciences tonight, May 21, at 7:30 p.m. at the Samuel Goldwyn Theater in Beverly Hills.

The screening will celebrate Tommy‘s 35th anniversary. Documentarian Murray Lerner will host the event, which will feature a new Digital Cinema presentation with the original Quintophonic soundtrack.

Following the screening, there’ll be an onstage panel discussion with writer-producer-director Ken Russell, editor Stuart Baird, and other members of the film’s creative team. (Above, Ann-Margret, Roger Daltrey as Tommy, and Oliver Reed.)

Pete Townshend, The Who’s guitarist, earned an Oscar nomination for his adaptation score and Ann-Margret received a well-deserved nomination for her bravura performance as Tommy’s mother.

Murray Lerner is an Oscar-winning documentarian (From Mao to Mozart: Isaac Stern in China) whose work includes Listening to You: The Who at the Isle of Wight Festival 1970 (1996) and Amazing Journey: The Story of The Who (2007).

Tickets for Tommy are $5 for the general public and $3 for Academy members and students with a valid ID, and may be purchased online at www.oscars.org, in person at the Academy box office or by mail. Doors open at 6:30 p.m. The Samuel Goldwyn Theater is located at 8949 Wilshire Boulevard in Beverly Hills. All seating is unreserved. For more information, call (310) 247-3600 or visit www.oscars.org.