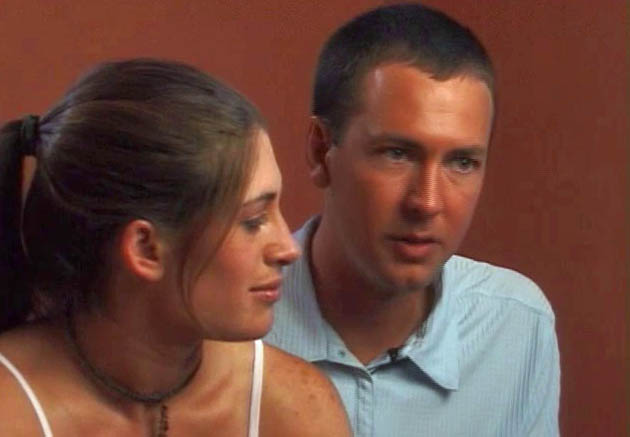 In other movie festival news, the sex-friendly mini-film festival CineKink will be presenting two Tony Comstock-directed documentaries on the private sex lives of adult film industry celebrities – Damon and Hunter: Doing It Together (2006) and Marie and Jack: A Hardcore Love Story (2002). The screenings will be held on Tuesday, Dec. 11, at 7 p.m. at the Two Boots Pioneer Theater in New York City. Comstock will be on hand for a post-screening discussion.

Melbourne Underground Film Festival winner Damon and Hunter: Doing It Together offers what’s described as a “truly intimate look” at gay adult stars Damon DeMarco and Hunter James, who became emotionally involved with each other.

The former documentary has a 46-minute running time; the latter lasts 28 minutes. 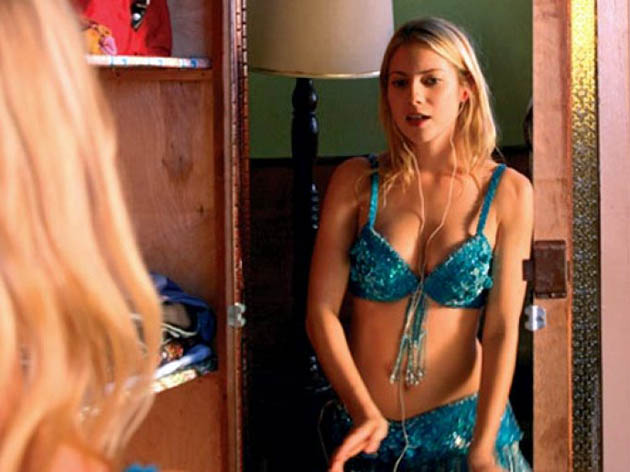 The 2007 Dubai Film Festival, which runs Dec. 9–16, will offer several world premieres, mostly in its Arabian Nights and Celebration of Indian Cinema sidebars.

Among the Arabian Nights premieres are the following:

The premieres in the Celebration of Indian Cinema sidebar are: 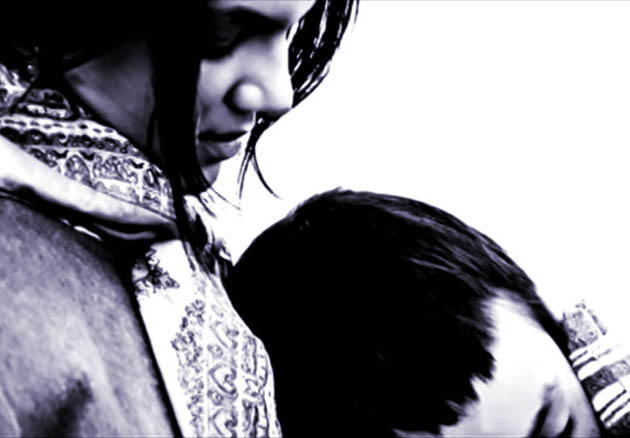 Frozen body in the Kashmiri Himalayas

Another entry in the Dubai Film Festival’s Celebration of Indian Cinema sidebar is Shivajee Chandrabhushan’s feature-film debut, Frozen, set in the Kashmiri Himalayas.

Written by Shanker Raman (from a story by Chandrabhushan), Frozen follows a teenage girl living with her father and younger brother in a remote mountain village. The family’s harsh but peaceful existence is drastically disrupted after the army settles at a nearby camp. The title refers to a frozen body found after the arrival of the military.

Spoken in Hindi and Ladakhi, and shot in black and white (by screenwriter Raman) so as to convey the region’s stark beauty, Frozen was filmed at freezing temperatures at 12,000-foot altitudes (approx. 3,600 meters above sea level).

Earlier this year, Frozen won the Special Jury Award at the Osian-Cinefan Film Festival in Delhi.

In the cast are veteran action hero Danny Denzongpa, Gauri, and Skalzang Angchuk.

And finally, the Dubai Film Festival’s Cinema of Africa sidebar will screen the premiere of Rayda Jacobs’ comedy Confessions of a Gambler, the story of a devout Muslim whose moral compass goes awry following his jackpot win at a casino. 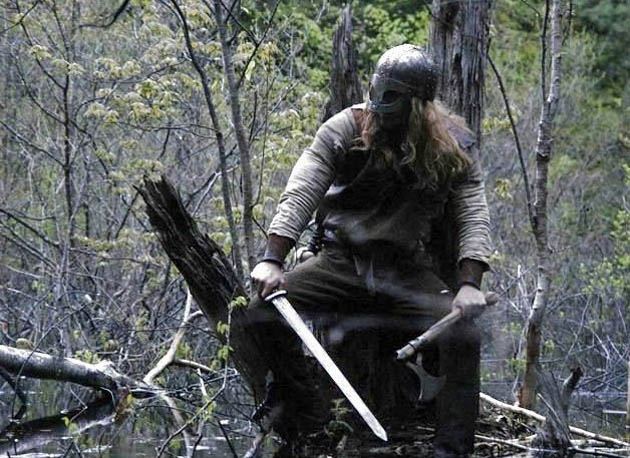 Severed Ways: The Norse Discovery of America. Tony Stone’s adventure drama set in 11th century North America and featuring Norsemen, Indians, and Irish monks (!) was the Best Film winner at this year’s Leeds Film Festival. But can one tell “whether it is even a film at all”?

And finally, the 2007 Leeds International Film Festival was held between Nov. 7–18. Tony Stone’s Severed Ways: The Norse Discovery of America was voted Best Film in the Official Competition. The Leeds festival jury’s cryptic comments about the adventure drama read:

“This extraordinary film goes all out with its regressive strategies, doing as much as possible to achieve as little as possible. Extending cinema’s existing parameters, we are challenged to question all assumptions we may bring to this film, including whether it is even a film at all. Whilst this seemingly simple maximalist spectacular remains bravely and resolutely indeterminable to the point of barely existing, its heroic and whole-hearted engagement with failure may be one of the most interesting and successful terrorist interventions in cinema we have yet seen. Huge. And yet hardly there.”

Partially shot in Newfoundland, Severed Ways: The Norse Discovery of America tells the story of two Norsemen who are separated from their tribesmen while on an 11th-century expedition in North America. The film’s soundtrack features both heavy metal and light opera.

Below is the list of the 2007 Leeds Film Festival winners.

A Complete History of My Sexual Failures, a Sundance Film Festival World Cinema Documentary entry, revolves around London-based filmmaker Chris Waitt’s attempts to understand the reasons for things having gone so wrong for him in the romance department. So, how does he set out to find enlightenment? According to the Sundance festival’s synopsis, he chats with “ex-girlfriends, medical practitioners, producers,” and, seemingly, his own (or perhaps somebody else’s?) mother.[1]

The Sundance Institute announced today, Dec. 7, the movie line-up in the 2008 Sundance Film Festival’s four main competitive categories. According to the Sundance press release, 121 features from 25 countries were selected. The – as usual – eclectic line-up includes the following:

The 2008 Sundance Film Festival runs Jan. 17–27 in Park City, Salt Lake City, Ogden, and Sundance, Utah. Below is a partial list of films in competition. For more information, visit www.sundance.org.

Each film in the 2008 Sundance Film Festival’s U.S. Documentary Competition is a World Premiere.

FIELDS OF FUEL (Dir.: Josh Tickell; Scr.: Johnny O’Hara) – America is addicted to oil and it is time for an intervention. Enter Josh Tickell, a man with a plan and a Veggie Van, who is taking on big oil, big government, and big soy to find solutions in places few people have looked.

FLOW: FOR LOVE OF WATER (Dir.: Irena Salina) – Water is the very essence of life, sustaining every being on the planet. Flow confronts the disturbing reality that our crucial resource is dwindling and greed just may be the cause.

THE GREATEST SILENCE: RAPE IN THE CONGO (Dir./Scr.: Lisa F. Jackson) – Jackson travels to remote villages in the war zones of the Congo to meet rape survivors, providing a piercing, intimate look into the struggle of their lives.

I.O.U.S.A. (Dir.: Patrick Creadon) – Few are aware that America may be on the brink of a financial meltdown. I.O.U.S.A. explores the country’s shocking current fiscal condition and ways to avoid a national economic disaster.

NERAKHOON (THE BETRAYAL) (Dir.: Ellen Kuras; Co-Dir.: Thavisouk Phrasavath; Scr.: Ellen Kuras, Thavisouk Phrasavath) – The epic story of a family forced to emigrate from Laos after the chaos of the secret air war waged by the U.S. during the Vietnam War. Kuras has spent the last 23 years chronicling the family’s extraordinary journey in this deeply personal, poetic, and emotional film.

PATTI SMITH: DREAM OF LIFE (Dir.: Steven Sebring) – An intimate portrait of poet, painter, musician and singer Patti Smith that mirrors the essence of the artist herself.

TRACES OF THE TRADE: A STORY FROM THE DEEP NORTH (Dir.: Katrina Browne; Co-dir.: Alla Kovgan, Jude Ray; Scr.: Katrina Browne, Alla Kovgan) – History finally gets rewritten as descendants of the largest slave-trading family in early America face their past, and present, as they explore their violent heritage across oceans and continents.

TROUBLE THE WATER (Dir.: Tia Lessin, Carl Deal) – An aspiring rap artist and her streetwise husband, armed with a video camera, show what survival is all about when they are trapped in New Orleans by deadly floodwaters, and seize a chance for a new beginning.

Each film in the 2008 Sundance Film Festival’s U.S. Dramatic Competition is a World Premiere.

DOWNLOADING NANCY (Dir.: Johan Renck; Scr.: Pamela Cuming, Lee Ross) – The tale of an unhappy wife whose online search for someone to put her out of her misery results in a torturous love affair. Cast: Maria Bello, Jason Patric, Rufus Sewell, Amy Brenneman.

THE LAST WORD (Dir./Scr.: Geoff Haley) – An off-beat romantic comedy about a solitary writer who makes his living composing other people’s suicide notes. After meeting the sister of a recently deceased client, he finds his reclusive life and secret career upended by an unusual romance. Cast: Winona Ryder, Wes Bentley, Ray Romano.

ALONE IN FOUR WALLS (ALLEIN IN VIER WÄNDEN) / Germany (Dir./Scr.: Alexandra Westmeier) – Adolescent boys struggle to grow up in a home for delinquents in rural Russia where life behind bars may be better than the release to freedom.

BE LIKE OTHERS / Canada / United Kingdom / U.S.A. / Iran (Dir.: Tanaz Eshaghian) – An intimate and unflinching look at life in Iran, seen through the lens of those living at its fringes, Be Like Others is a provocative look at a generation of young Iranian men choosing to undergo sex change surgery.

A COMPLETE HISTORY OF MY SEXUAL FAILURES / United Kingdom (Dir.: Chris Waitt; Scr.: Chris Waitt and Henry Trotter) – Chris is a useless boyfriend. Determined to find out why, he consults his ex-girlfriends, medical practitioners, producers, and mother to find out how women really see him. Has this journey made him potential boyfriend material or is he staring a life of loneliness square in the face?

MAN ON WIRE / United Kingdom (Dir./Scr.: James Marsh) – In 1974, Philippe Petit, a young Frenchman, dances on a wire suspended between New York’s Twin Towers. Consequently, Philippe is arrested and thrown into jail for what would become known as “the artistic crime of the century.”

PUUJEE / Japan (Dir./Scr.: Kazuya Yamada) – Against the backdrop of a magnificent but harsh natural landscape, a Japanese photojournalist encounters puujee, a young girl who tames wild horses on the Mongolian plains.

TRIAGE: DR. JAMES ORBINSKI’S HUMANITARIAN DILEMMA / Canada (Dir.: Patrick Reed) – Acclaimed doctor James Orbinski, former head of Doctors Without Borders, returns to Africa to confront the harsh reality of conditions there and explores what it means to be a humanitarian.

UP THE YANGTZE / Canada (Dir./Scr.: Yung Chang) – At the edge of the Yangtze River, not far from the Three Gorges Dam, young men and women take up employment on a cruise ship, where they confront rising waters and a radically changing China.

BLUE EYELIDS (PÁRPADOS AZULES) / Mexico (Dir.: Ernesto Contreras; Scr.: Carlos Contreras) – When Marina wins a beach getaway trip for two, her desperate search for someone to take with her leads to a complicated relationship and the revelation that she might be better off on her own. Cast: Cecilia Suárez, Enrique Arreola, Ana Ofelia Murguía, Tiaré Scanda, Luisa Huertas.

I ALWAYS WANTED TO BE A GANGSTER (J’AI TOUJOURS RÊVÉ D’ÊTRE UN GANGSTER) / France (Dir./Scr.: Samuel Benchetrit) – Told in four vignettes, this existential comedy relates the exploits of four aspiring criminals who hope to improve their lot, but find that they might not have what it takes for a life of crime. Cast: Sergi López, Jean Rochefort, Alain Bashung, Anna Mouglalis.

KING OF PING PONG (PING PONGKINGEN) / Sweden (Dir.: Jens Jonsson; Scr.: Jens Jonsson, Hans Gunnarson) An ostracized and bullied teenage boy who excels only in ping pong descends into an acrimonious struggle with his younger, more popular brother when the truth about their family history and their father surfaces over the course of their spring break. Cast: Georgi Staykov, Ann-Sofie Normi, Frederik Nilsson, Jerry Johansson.

MERMAID (RUSALKA) / Russia (Dir./Scr.: Anna Melikyan) – The fanciful tale of an introverted little girl who grows up believing she has the power to make wishes come true. She must reconcile this belief with reality when, as a young woman, she journeys to Moscow and grapples with love, modernity and materialism. Cast: Masha Shalaeva, Evgeniy Ciganov, Maria Sokolova, Nastya Doncova.

THE WAVE (DIE WELLE) / Germany (Dir.: Dennis Gansel; Scr.: Dennis Gansel and Peter Thorwarth) – A high school teacher’s unusual experiment to demonstrate to his students what life is like under a dictatorship spins horribly out of control when he forms a social unit with a life of its own. Cast: Juergen Vogel, Frederick Lau, Max Riemelt, Jennifer Ulrich, Christiane Paul.

I love Laura .. She is real buty.. I need a girl like her.. i’would like to make a frindship with girls looks lik laura

Hi. I’ve been going to the fourth DIFF edition this year, almost every day. I like the new things that they’ve started as it makes the festival seem more geared towards people who like to watch all kinds of films from commercial stuff to the artsy kind also. I especially like the Dubai First people’s Choice Award which lets us vote 1 to 5 for movies that we watch. I think the winning film might get a prize at the closing ceremony.