Tony Curtis’ Movies & Best Performances: From ‘Some Like It Hot’ to ‘The Boston Strangler’

TCM will be showing several goodies on Tony Curtis Day, including Richard Fleischer’s rousing adventure epic The Vikings (1958), in which Curtis plays opposite his then-wife Janet Leigh; the highly enjoyable Blake Edwards comedy Operation Petticoat (1959), with Curtis, his idol Cary Grant, and a bunch of (female) army nurses huddled aboard a pink submarine; and Billy Wilder’s Some Like It Hot (1959), considered by some the greatest comedy ever made.

Well, in my view there are many funnier comedies out there; nevertheless, Some Like It Hot is a hoot, what with Curtis and Jack Lemmon playing jazzed-out babes (right), Curtis (when not in drag) impersonating (his idol) Cary Grant, Marilyn Monroe doing her usual kind-hearted but ditzy blonde bit, and Joe E. Brown demonstrating that if you truly love someone you don’t mind his little imperfections.

Some also consider Alexander Mackendrick’s Sweet Smell of Success (1957) one of the best films of the 1950s. Personally, I find this tale of ambition, powerlust, and the American Nightmare both great and mediocre: many of Ernest Lehman and Clifford Odets’ situations (from one of Lehman’s novellas) and dialogue are excellent, James Wong Howe’s cinematography is marvelously moody, and Burt Lancaster, as a Walter Winchell-like gossip writer, has a few good moments. Unfortunately, Mackendrick’s melodramatic touch detracts from what should have been a no-holds-barred, hard-hitting drama.

I haven’t seen George Sidney’s Who’s That Lady? (1960), about cheating husbands and alleged spies, but it’s supposed to be an enjoyable light comedy. 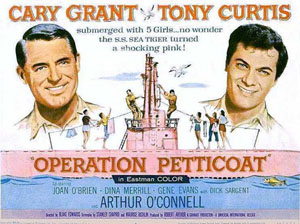 Tony Curtis was deservedly best known for his performance in Billy Wilder’s 1959 comedy Some Like It Hot (right, with Jack Lemmon), in which Curtis spends much of his screen time either as a woman or as Cary Grant.

Curtis (born Bernard Schwartz in the Bronx on June 3, 1925), despite a none-too-promising start as the lead in a number of B features for Universal, actually delivered several other good performances as well.

He was particularly effective in a comedy opposite none other than Cary Grant himself – who happened to be one of Curtis’ idols. That was Blake Edwards’ Operation Petticoat, also released in 1959, and which also starred a pink submarine.

Another Tony Curtis performance worth checking out is his serial killer in Richard Fleischer’s The Boston Strangler (1968). Curtis believed he was going to get an Oscar for that one, but he wasn’t even nominated.

Curtis is also well respected for three dramatic roles from the late 1950s/1960: his ambitious press agent in Alexander Mackendrick’s much-admired Sweet Smell of Success (1957); his escaped convict chained to Sidney Poitier in Stanley Kramer’s unbearably well-intentioned The Defiant Ones (1958), for which both actors received Academy Award nominations; and his slave-turned-toyboy-turned-insurgent in Stanley Kubrick’s Spartacus (1960).

I thought he was terrific in “The Boston Strangler,” as well as “Houdini.” He was less convincing as Antoninus in “Spartacus,” but I still like him in that movie. He was a real movie star. As I remember him saying on David Letterman’s show years ago, people would approach him on the street and say, “Tony, you’re the movies.” I wouldn’t argue with that statement at all.