Top Box Office Movies: Women to the Sidelines (Except Bullock) 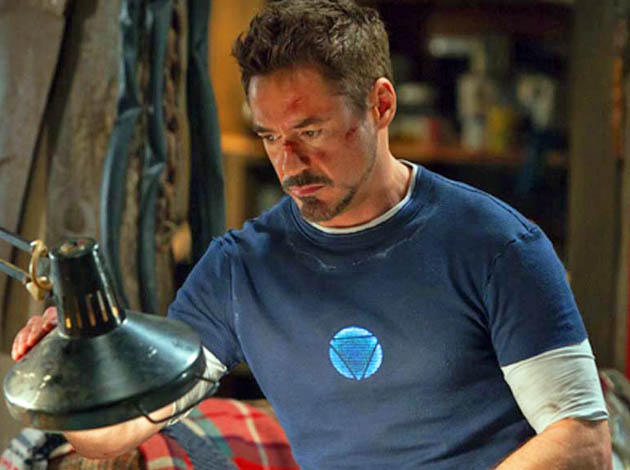 Top box office: Domestic record broken (once again) – if you dwell in an alternative reality

Even though Will Ferrell’s comedy Anchorman 2: The Legend Continues and the latest Martin Scorsese-Leonardo DiCaprio collaboration, The Wolf of Wall Street, have opened more modestly than expected, while the Justin Bieber concert movie Believe has been totally discredited, the 2013 Christmas and New Year’s season has been quite strong in the U.S. and Canada, with top box office hits ranging from Peter Jackson’s The Hobbit: The Desolation of Smaug (though trailing its predecessor, The Hobbit: An Unexpected Journey) to David O. Russell’s all-star crime comedy-drama American Hustle.

Does this latest record-breaking box office news sound too good to be true?

Well, yes. Perhaps because it is.

See, Thor and Loki and Bilbo and Katniss wouldn’t know about these pesky things, but on Planet Earth there is something called “inflation.” That’s when prices go up. And that includes the price of movie tickets – in the early 21st century, also inflated by IMAX and 3D surcharges.

As an example: last year’s $10.837 billion box office record would represent about $11 billion in 2013 dollars according to the U.S. government’s Consumer Price Index.

As found on Box Office Mojo’s yearly chart, which uses movie-ticket price averages released by the National Association of Theater Owners, so far 1.346,1 billion tickets have been sold in the United States and Canada in 2013. In 2012, 1.361,5 billion were sold.

So, 2013 will inevitably surpass 2012 in unadjusted box office grosses, but may trail last year in both inflation-adjusted figures and number of actual tickets sold.

As an aside, bear in mind that movie-ticket price increases don’t quite follow the U.S. government’s CPI, as other factors need to be accounted for, such as the aforementioned 3D and IMAX surcharges.

Now, even if 2013 surpasses 2012 in adjusted box office figures/ticket sales, it should still end up as only the 13th “most successful” year at the domestic box office – in ticket sales – since 1980.

Scroll down a bit if you want to check out the actual record-setting year in the domestic market, and its movies and stars.

Well, here are the biggest releases in each of these years (see clarifying info further below):

Of course, let’s not forget that late-year releases such as The Lord of the Rings: The Return of the King (or, later on, James Cameron’s 2009 blockbuster Avatar), actually sold most of their tickets during the following calendar year.

The actual top box office hit in 2003, for instance, was Pixar’s Andrew Stanton-directed Finding Nemo, while the actual no. 1 movie of 1998 was James Cameron’s Titanic, a late 1997 release toplining Leonardo DiCaprio, Kate Winslet, and Gloria Stuart.

As further evidence that moviegoers want original, quality entertainment, below you’ll find the list of the top 15 movies at the 2013 domestic box office. Nine of them are sequels or reboots (ten if you include Oz the Great and Powerful), and more than half are 3D releases.

The Walt Disney Studios and Warner Bros. were the year’s top two Hollywood majors. Disney has five movies among the top 15; Warners has three.

With the exception of the sleeper blockbuster Gravity, which, however dumbed down, targeted a more mature audience, every single one of the titles below were aimed at either teenagers/very young adults or little children.

Also worth noting, only five titles – including the animated Frozen and The Croods – feature key female characters.

And then the Righteous Ones cry and wail on social media as to why the Hollywood studios continuously place their focus on male-centered movies. Or why there are so many sequels and reboots. Or why most big-studio movies are braindead on arrival.

Top box office hits of 2013 include the Sandra Bullock and Melissa McCarthy comedy The Heat, directed by Paul Feig. Nearly as popular at the domestic box office as Feig’s female-centered Bridesmaids – $159.58 million vs. $169.1 million – The Heat is the 15th most successful release of the year. Among the top half dozen is Alfonso Cuarón’s Gravity, which also features Sandra Bullock. And that’s how the Best Actress Oscar winner (The Blind Side, 2009) ended up being the only star with two entries among 2013’s top box office films.

Sandra Bullock an exception to the rule

Curiously, two of 2013’s female-centered hits – Gravity and The Heat – starred Sandra Bullock. The Best Actress Oscar winner (for The Blind Side, 2009), in fact, is the only star with two titles among the top 15 movies.

Note: As a commenter points out further below, Benedict Cumberbatch also has two movies among the top 15. Cumberbatch, however, isn’t the star of either Star Trek: Into Darkness or The Hobbit: The Desolation of Smaug.

And make sure to keep scrolling down a bit more, so you can become acquainted with the domestic box office’s actual record-setting year – and its top movies and stars.

‘American Hustle’ to displace ‘The Heat’?

If so, the female-centered The Heat will be gone from the list, which means Sandra Bullock will have only one movie among 2013’s top 15 hits while Jennifer Lawrence will have two – although, in all fairness, Lawrence doesn’t actually have a lead role in American Hustle. 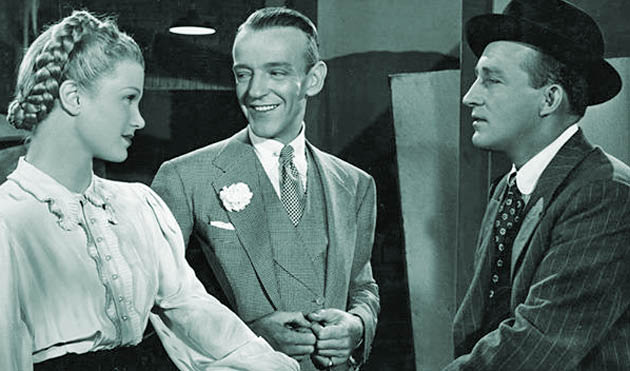 Blue Skies with Joan Caulfield, Fred Astaire, and Bing Crosby. When discussing domestic box office records, 1946 was indisputably the best year ever, with 4.067 billion tickets sold in the U.S. One of the major hits that year was the color Paramount musical Blue Skies, directed by a relatively minor (and largely forgotten) talent, Stuart Heisler (replacing Mark Sandrich, who suffered a fatal heart attack during the pre-production process), but starring two of the biggest names of the studio era: Bing Crosby and Fred Astaire. The pretty, blonde, and much younger Joan Caulfield was their leading lady.[1]

Before wrapping this up, a couple of things should be made clear.

a) In addition to box office grosses (domestic and international; the latter is reportedly up about 5 percent this year, though currency fluctuations must be taken into account), Hollywood studios rely on ancillary revenues (once again, domestic and international) to justify their investments. Representing the bulk of the studios’ revenues, these include television, VOD, DVD/Blu-ray, and merchandising sales.

b) If you truly want a record-breaking year at the domestic box office, look no further than … 1946. According to the Motion Picture Association of America, 4.067 billion tickets were sold that year.

Well, for starters, the end of World War II and the return of millions of individuals to civilian life. Due to a dramatic fall in government spending, the U.S. economy was hardly at its strongest that year (GDP plummeted 11.6 percent), but the movies provided a relatively cheap form of entertainment.

Instead of superheroes, hobbits, CGI, and 3D, Hollywood offered plenty of comedies, musicals, and melodramas – plus several film noirs and a couple of risqué Westerns. Below is a list of notable 1946 titles:

No less than 19 of the 25 movies listed above were either female-centered or ensemble male/female efforts. All but one – Smoky – were chiefly aimed at adults.

And in case you’re wondering, the year after Hiroshima and Nagasaki, Americans of good moral standing were outraged at … the Westerns Duel in the Sun and The Outlaw – ultimately two of the top box office hits of the decade.

Note: A few of the titles listed above – e.g., Duel in the Sun – were released later in the year and earned most of their money in 1947.

[1] Although never a major star, Joan Caulfield was featured in a few of the top box office movies of the late 1940s, most notably the 1947 releases Welcome Stranger, also with Crosby, and Dear Ruth, opposite William Holden.

Some have suggested that J.D. Salinger’s The Catcher in the Rye antihero Holden Caulfield was inspired by the surnames of the two Dear Ruth leads. The problem with this theory is that the name – even if not necessarily the character himself – had already been featured in a couple of Salinger’s short stories earlier in the decade.

Image of Fred Astaire, Bing Crosby, and Joan Caulfield in Blue Skies, one of the biggest hits of 1946, the top box office year in (U.S. cinema) history: Paramount Pictures.

Marvel Avengers Box Office: Ahead of The Dark Knight?

Bob Hope: ‘Thanks for the Memories’ Film Series

I was told that most films are made for 15 year old boys in Taiwan. There were a few films for adults , though several of them were “small” films: Philomena, Nebraska, Labor Day (saw in a screening, has not yet been released), 12 Years a Slave, August: Osage County, and Blue Jasmine. A big studio may distribute these films, but they won’t produce anything but a blockbuster, and they’re considered flops if they make under $400 million. I’ll just add, I do love Benedict Cumberbatch and while the Julian Assange film wasn’t the greatest, he was excellent.

The Hunger Games, Frozen, Gravity, The Croods (If you’ve seen the movie Emma Stone’s character was the main character in that movie), The Heat. I’m counting five movies, focused on female characters!

@Emil,
The author of the post felt “The Croods” was more of an ensemble, male/female piece than “Gravity” and “The Heat,” or even “Catching Fire” and “Frozen.” But the text has been amended a bit to include five films with key female characters.

Benedict Cumberbatch was also in two of those top 15 movies - Star Trek and The Hobbit.

True, but he wasn’t THE star in either one.