Transformers: Dark of the Moon: Shia LaBeouf Dwarfed by Explosions

What’s a nice guy like Shia LaBeouf doing in a movie like Transformers: Dark of the Moon? Well, for one, getting hooked up with Rosie Huntington-Whiteley instead of Megan Fox. LaBeouf is also making megabucks for starring in one of the most successful – and most widely derided – franchises in movie history.

Michael Bay directs Transformers 3, which, according to a number of scientific studies, can be seriously harmful to movie audiences’ brain cells. Other studies suggest Bay’s latest may well become the biggest summer 2011 hit, which says a lot about the brain cells of movie audiences everywhere.

‘Transformers: Dark of the Moon’ cast

Besides Shia LaBeouf and Rosie Huntington-Whiteley, the Transformers: Dark of the Moon cast features the following: 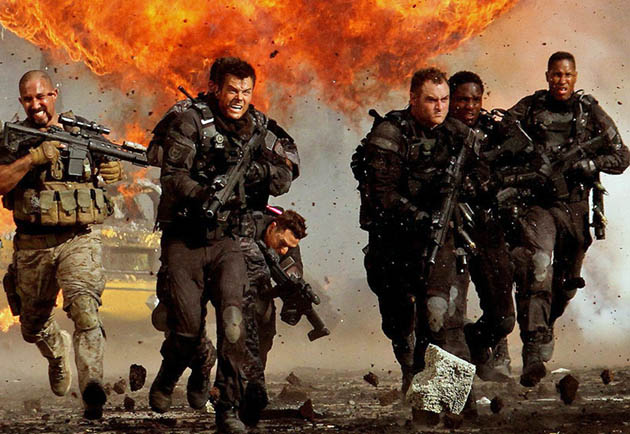 In the above image from Transformers: Dark of the Moon, you can (barely) see Josh Duhamel and Tyrese Gibson, among others, looking very macho and very dirty as they do battle with some unseen enemy. As usual, the actors are dwarfed by the explosions all around them.

Written by Ehren Kruger – amazing that someone actually writes these things – the Transformers 3 plot deals with Autobots out to avenge the critical drubbing earned by Transformers: Revenge of the Fallen. There’s some kind of machinery on the Moon that will help them control movie critics’ brains or some such, and in all likelihood lead to one more Transformers installment within the next two or three years.

But here’s wondering: how many more times can the filmmakers and visual-effects artists and technicians make a series of deafening explosions worth two hours of one’s life and shelling out $30 (including soda, popcorn, parking)?

Transformers: Dark of the Moon opens on July 1 in North America.

Anne Hathaway and James Franco in drag as Marilyn Monroe at the 2011 Academy Awards ceremony.

James Franco roast: Following criticisms and questions, Best Actor Oscar nominee asserts he was not ‘under the influence’ while hosting the 2011 Academy Awards ceremony

James Franco explains to David Letterman that no, he wasn’t “under the influence” while co-hosting with Anne Hathaway the 2011 Oscar telecast last Feb. 27. The most recent Academy Awards ceremony was lambasted by television critics, failed to connect with TV audiences, and was considered by some to be one of the (many) nadirs of Oscar TV history. See James Franco chatting with David Letterman in the video below.

“I think I know why, because –,” James Franco says about the reasons for all those “was he high?” comments. “I love her, but Anne Hathaway is so energetic that I think the Tasmanian devil would look stoned standing next to Anne Hathaway.” Franco adds that “honestly, I played those lines as well as I could.”

Answering Letterman’s question, “What the hell do you care?” about all the pans he has received for his Oscar-hosting abilities, James Franco, a Best Actor nominee for Danny Boyle’s 127 Hours, replied:

But here’s the hypocritical thing. Leading up to the Oscars, I couldn’t hear enough about how “Oh, people don’t care about the Oscars anymore,” “It’s dead,” “It’s boring,” “It’s at the end of a long awards season, who cares about it?”

Well, as soon as you don’t host the way they want you to, they certainly care and they won’t shut up about it!

Bear in mind that some years ago David Letterman’s Oscar-hosting abilities weren’t exactly praised to the heavens, either.

Photo of Anne Hathaway and James Franco in drag as Marilyn Monroe in Gentlemen Prefer Blondes at the 2011 Academy Awards ceremony, held at the Kodak Theatre in Hollywood, on Sunday, Feb. 27 ’11: Michael Yada / © A.M.P.A.S.

In a statement credited to Snyder (but written by a Warner Bros. flack?), the director had the following to say about the casting of Amy Adams:

Second only to Superman himself, the question of who will play Lois Lane is arguably what fans have been most curious about. So we are excited to announce the casting of Amy Adams, one of the most versatile and respected actresses in films today. Amy has the talent to capture all of the qualities we love about Lois: smart, tough, funny, warm, ambitious and, of course, beautiful.

There was a big, giant search for Lois. For us it was a big thing and obviously a really important role. We did a lot of auditioning but we had this meeting with Amy Adams and after that I just felt she was perfect for it.

Amy Adams will next be seen in The Muppets and in Walter Salles’ On the Road, opposite Kristen Stewart, Garrett Hedlund, and Sam Riley.

Revenge of the Fallen Is No. 1 + Bridesmaids the Top R-Rated Female Comedy Ever?