Trent Reznor and wife Mariqueen Maandig at the Oscars

Sporting an ultra-cool look, Trent Reznor and wife Mariqueen Maandig, both members of the hip, experimental band How to Destroy Angels, arrive at the 2011 Academy Awards ceremony held on Feb. 27 at the Kodak Theatre in Hollywood.

Trent Reznor, formerly the frontman of the alternative rock group Nine Inch Nails, and fellow How to Destroy Angels band member Atticus Ross went on to share the Best Original Score Oscar for their work on David Fincher’s Facebook movie The Social Network.

After Reznor’s Oscar win, “I want to thank you like an animal” became a Twitter hit – in reference to a similar-sounding line found in the Nine Inch Nails’ 1994 song “Closer.”

Reznor’s next big-screen effort will be another collaboration with David Fincher: a Hollywood remake of the international Swedish blockbuster The Girl with the Dragon Tattoo, starring Rooney Mara and Daniel Craig.

In front of the camera, Reznor has been seen in small roles in:

Trent Reznor and wife Mariqueen Maandig were married in 2009. 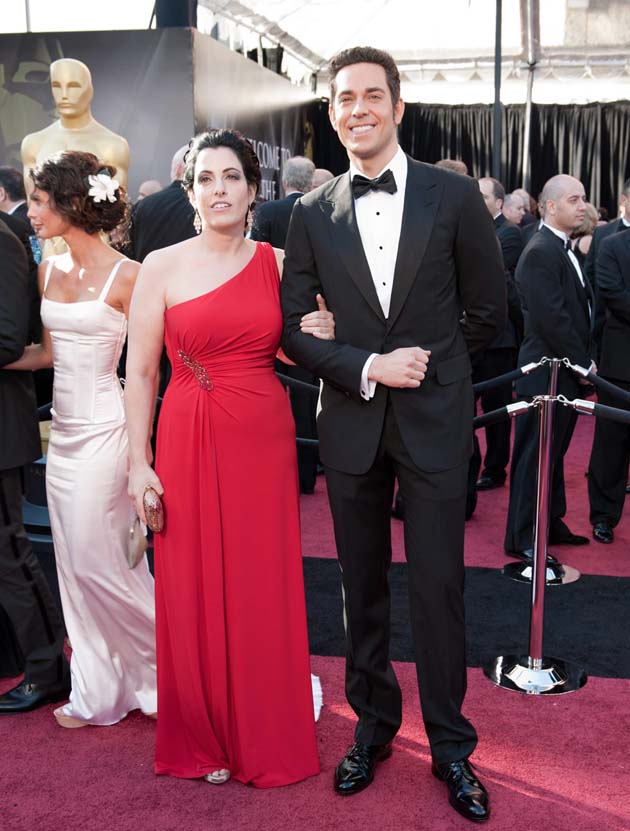 Pictured above is Zachary Levi and a guest on the 83rd Academy Awards’ Red Carpet on Sunday, Feb. 27, just outside the Kodak Theatre in Hollywood.

At the Oscar ceremony, Zachary Levi and Mandy Moore performed “I See the Light,” a Best Original Song nominee – music by Alan Menken, lyrics by Glenn Slater – from the animated feature blockbuster Tangled.

The 2011 Best Song winner turned out to be Randy Newman’s “We Belong Together,” from another animated feature, Toy Story 3 – last year’s biggest domestic box office hit.

Zachary Levi’s movie debut took place in Mark Douglas Miller’s comedy short Reel Guerrillas (2005), while his feature film debut was in a supporting role in John Whitesell’s comedy Big Momma’s House 2 (2006). Most notably, he was seen in Betty Thomas’ Alvin and the Chipmunks: The Squeakquel (2009), with David Cross and Jason Lee.

Zachary Levi will next be seen in Ryan Schifrin’s short No Rest for the Wicked: A Basil & Moebius Adventure, also featuring veteran Malcolm McDowell (A Clockwork Orange).

On television, Levi is best known for the TV series Less Than Perfect and Chuck. In the latter, he plays computer nerd Chuck Bartowski. 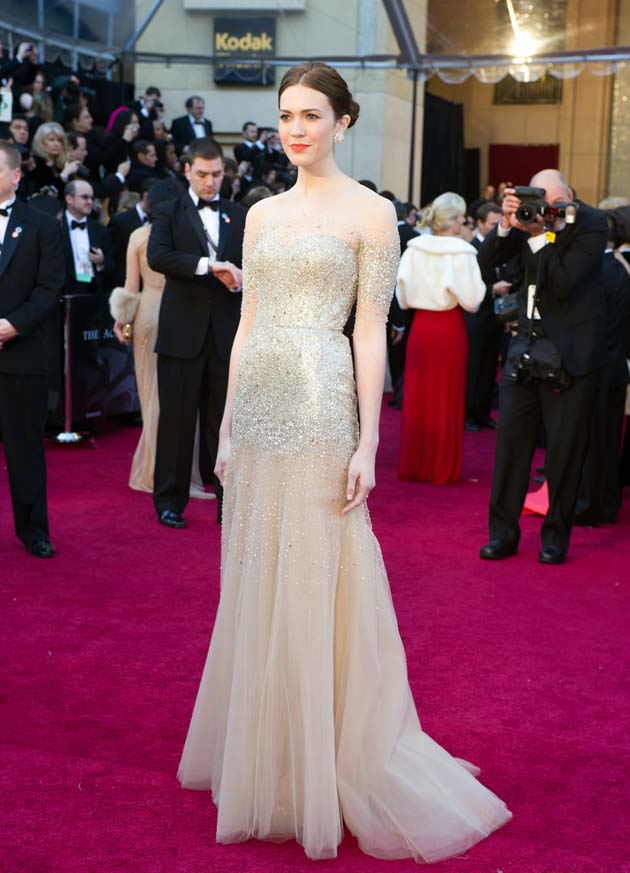 A regal, silver-dressed Mandy Moore is seen above on the 2011 Academy Awards’ Red Carpet. As mentioned earlier in this article, during the Oscar ceremony Moore and Zachary Levi sang “I See the Light” from Disney’s animated hit Tangled, a musical about the Rapunzel fairy tale.

“I See the Light” was one of four nominees for the Best Song Academy Award. The other three were: 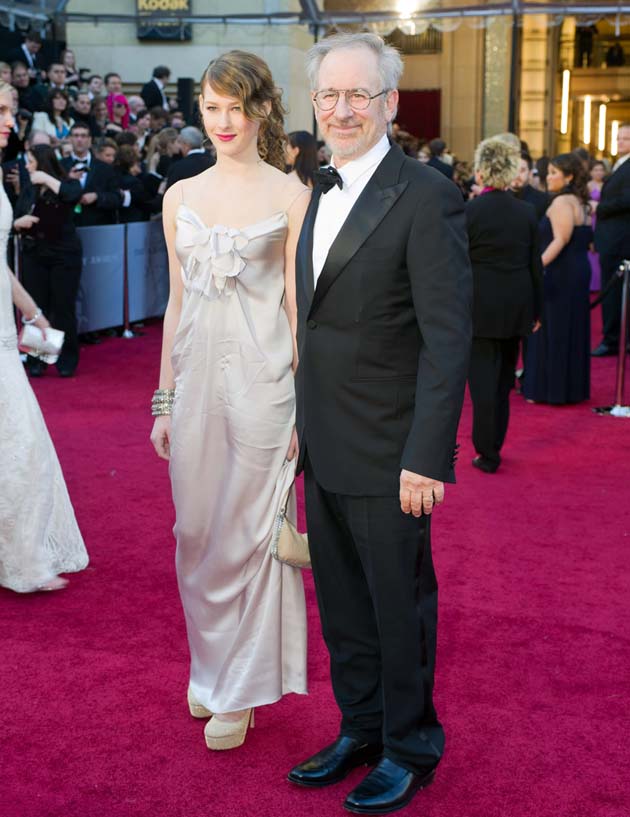 Steven Spielberg and daughter Destry Spielberg arrive at the 83rd Academy Awards, held on Feb. 27 at the Kodak Theatre in Hollywood.

There was quite a bit of animosity at the time, as some felt that Miramax, owned by brothers Bob and Harvey Weinstein, overdid its Oscar campaigning – while still managing to sway enough Academy of Motion Picture Arts and Sciences members to vote for its film.

Somewhat ironically, at the 2011 Academy Awards ceremony Steven Spielberg presented the Best Picture Award to The King’s Speech. Toplining Colin Firth, Helena Bonham Carter, Geoffrey Rush, Guy Pearce, and Claire Bloom, this British production was distributed in the United States by none other than The Weinstein Company, chaired by Bob and Harvey Weinstein.

Additionally, Spielberg is currently working on The BFG – no relation to the expression “BFF” – based on a Roald Dahl novel, and featuring, among others, Mark Rylance, Rebecca Hall, Ruby Barnhill, Bill Hader, and Penelope Wilton. 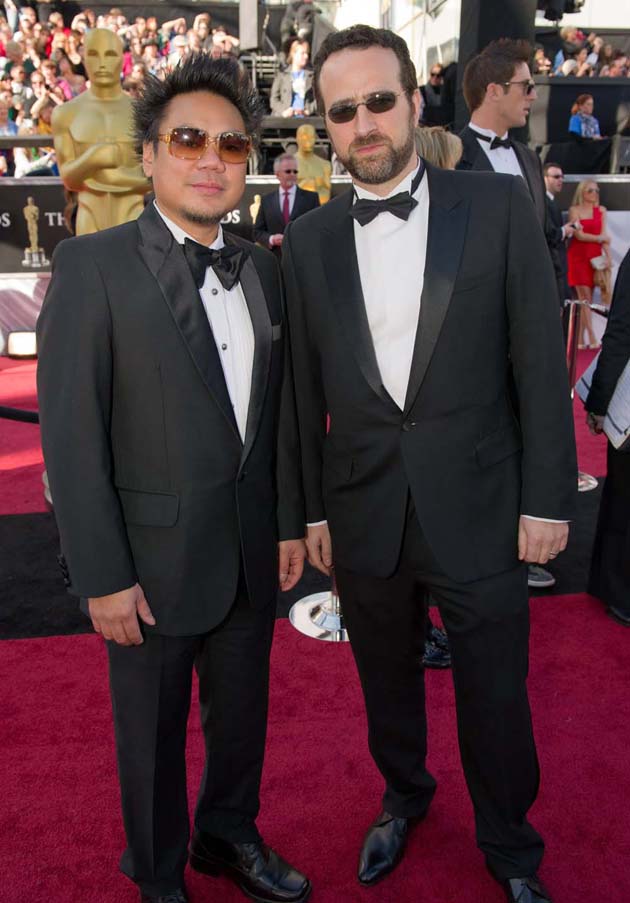 Pictured above are Black Swan cinematographer Matthew Libatique and editor Andrew Weisblum on the 2011 Oscars’ Red Carpet, just outside the Kodak Theatre. Both Libatique and Weisblum were shortlisted for their work on Darren Aronofsky’s psychological drama starring Best Actress Oscar winner Natalie Portman. 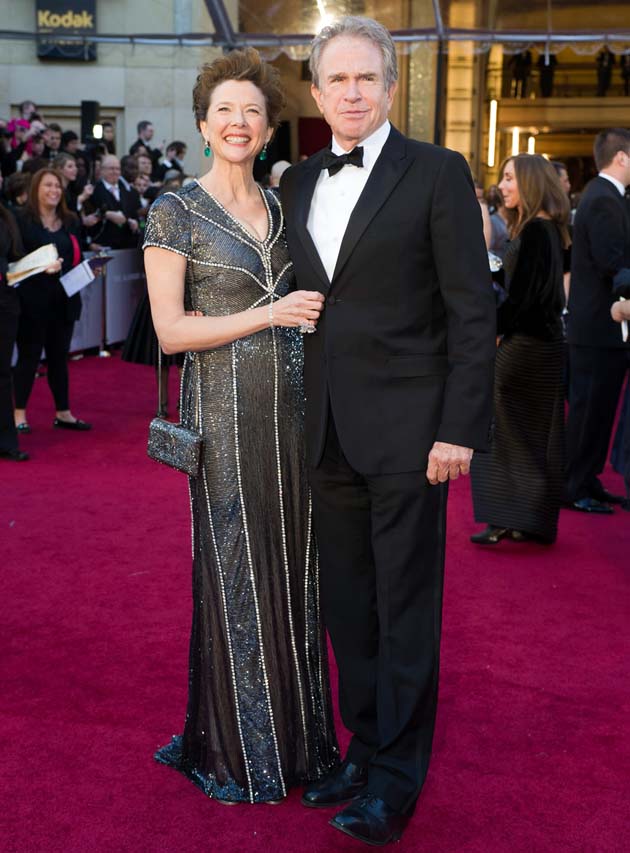 Annette Bening and Warren Beatty on the Oscars’ Red Carpet.

Smiling radiantly, Best Actress Academy Award nominee Annette Bening and husband Warren Beatty are seen above as they arrive at the 83rd Academy Awards ceremony, held on Feb. 27, ’11, at the Kodak Theatre, located in the world-renowned (but locally not all that prestigious) Los Angeles suburb of Hollywood.

Annette Bening was in the running for her performance as the lesbian companion / wife to Julianne Moore and mother / adoptive mother of Mia Wasikowska and Josh Hutcherson in Lisa Cholodenko’s The Kids Are All Right. Bening lost the Best Actress Oscar to Natalie Portman for her mentally unbalanced ballerina in Darren Aronofsky’s Black Swan.

The Kids Are All Right was Annette Bening’s fourth Academy Award nomination. Her previous ones were:

As can be seen above, Annette Bening has yet to take home an Academy Award, though late last year she was the New York Film Critics Circle’s Best Actress for The Kids Are All Right.

Warren Beatty has never won a Best Actor Oscar either. However, he did come out on top in the Best Director category for Reds (1981), a romantic-historical drama starring Beatty himself, Diane Keaton, Jack Nicholson, and Maureen Stapleton.

Warren Beatty’s four Best Actor nominations were for the following: 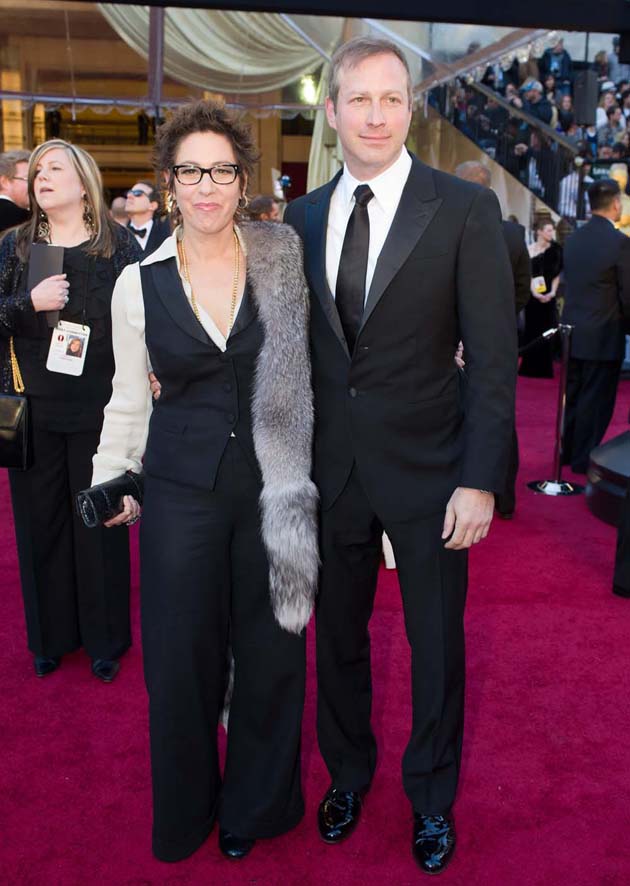 Lisa Cholodenko and Stuart Blumberg: ‘The Kids Are All Right’ director and screenwriter at the Academy Awards.

The Kids Are All Right writer-director Lisa Cholodenko and screenwriter Stuart Blumberg, both nominated for the Best Original Screenplay Oscar, are pictured on the 2011 Oscars’ Red Carpet. 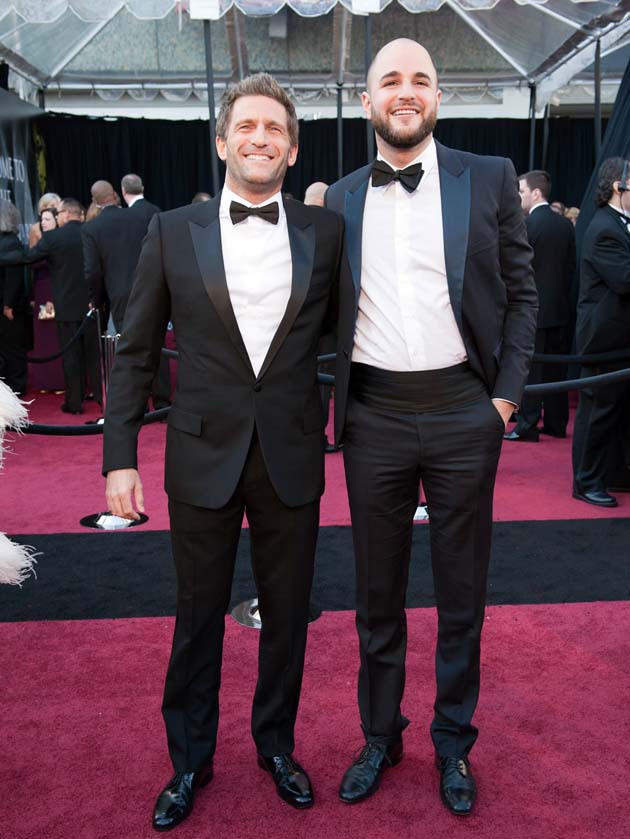 Gary Gilbert and Jordan Horowitz, ‘The Kids Are All Right’ producers.

Seen above are Best Picture Oscar contender The Kids Are All Right producers Gary Gilbert and Jordan Horowitz on the 83rd Academy Awards’ Red Carpet, just outside the Kodak Theatre in Hollywood.

A curiosity: Gary Gilbert was nominated as one of The Kids Are All Right producers; Jordan Horowitz was not. Barring a handful of exceptional cases, according to Academy of Motion Picture Arts and Sciences regulations only three producers per film are eligible to receive an Oscar nomination.

The nominated producers of The Kids Are All Right were Gilbert, Jeffrey Levy-Hinte, and Celine Rattray.

‘The Kids Are All Right’: Oscar nominations

Photo of The Kids Are All Right producers Gary Gilbert and Jordan Horowitz: Ivan Vejar / © A.M.P.A.S.

‘What Is the Tea Party?’ Racist Says Morgan Freeman

The Kids Are All Right Box Office: Lesbian Comedy Will Not Reach...

Tacky? No class? They look great.

My God, she is tacky. That dress would be more at home in the Seventh Veil than the Kodak.

Wonderful couple; she is so gorgeous. I was so happy Trent won! =D He sure deserved it.