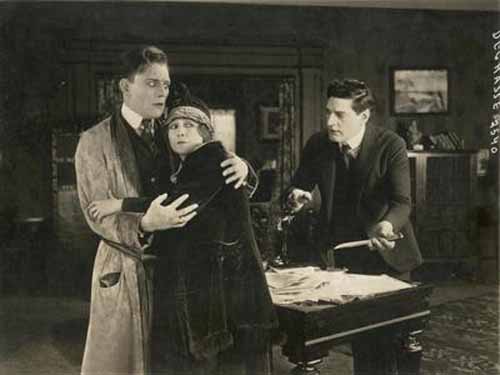 “Triumph” definition: Discovering long-thought lost cinematic works, such as the (coincidentally titled) Joseph De Grasse-directed 1917 drama Triumph, starring Dorothy Phillips and featuring future Metro-Goldwyn-Mayer superstar Lon Chaney in one of his earlier film appearances. The other man in the photo is William Stowell.

Tonight at the Academy’s Linwood Dunn Theater in Hollywood:

Triumph (1917) and The Blood Ship (1927), two recently rediscovered silent films that were once thought to be either totally or partially lost, will be screened as part of the Academy of Motion Picture Arts and Sciences’ “Lost and Found” series tonight, Oct. 11, at 7:30 p.m. at the Linwood Dunn. The screenings are a result of the latest preservation efforts by the Academy Film Archive. The program will feature live piano accompaniment by the always reliable Michael Mortilla.

Starring Dorothy Phillips, then a major star, and a pre-stardom Lon Chaney, Triumph is the story of an actress (Phillips) in love with a playwright (Chaney). Nothing too exciting thus far, but enters the stage manager (William J. Dyer) who decides to blackmail the actress for her affections.

It’s curious that in Triumph Dyer plays the type of role that Chaney would make his own in the 1920s: the ugly guy who longs for but can’t get the pretty girl. So he becomes boundlessly mean or mad – sometimes both – usually to great effect. (Right photo: Dorothy Phillips and Triumph leading man William Stowell.)

As per the Academy’s press release, “with the loss of many of Chaney’s earliest films, the rediscovery of the first three reels of Triumph sheds welcome light on the actor’s early career. Photographs and title cards have been added to complete the story.”

With the recent discovery of its final reel, The Blood Ship will be screening in its entirety for the first time since its original release 80 years ago.

Set in the high seas, the story – with several elements in common with The Sea Wolf – follows a man of a certain age (Hobart Bosworth) searching for his kidnapped daughter after serving time in prison for a crime he did not commit. He boards a ship ruled by the ruthless Captain Swope (Walter James), who claims to be the father of a pretty young woman (Jacqueline Logan, Mary Magdalene in Cecil B. DeMille’s The King of Kings).

Based on a novel by Norman Springer, The Blood Ship also stars Richard Arlen (one of the principals in the first film to win a Best Picture – or rather, “Best Production” – Academy Award, Wings).

The Blood Ship was directed by George B. Seitz, from a screenplay adaptation by J. O. Taylor, Harry Davis, and Fred Myton.

(Is this gonna be a Fred Myton evening? Who was this man? I just checked on the IMDb: Myton wrote about a zillion B movies, from the 1910s to the 1950s.)

“Lost and Found” is a periodic screening series designed to showcase archival prints that have been recently rediscovered, or films that have been restored from new materials that improve the presentational quality of previous available versions.

Tickets to “Lost and Found” are $5 for the general public and $3 for Academy members and students with a valid ID. Tickets will be available for purchase beginning Monday, October 1, by mail, at the Academy box office during regular business hours, or online at www.oscars.org. Doors open at 6:30 p.m. All seating is unreserved.

The Linwood Dunn Theater is located at 1313 Vine Street in Hollywood. Free parking is available through the entrance on Homewood Avenue (one block north of Fountain Avenue). For additional information call (310) 247-3600.

Speaking of “lost and found,” Andre. The long-lost Life Story of David Lloyd George (1918) by Maurice Elvey, which Kevin Brownlow called the “find of the century,” is being shown at Fflics (October 25-27), a Welsh film festival that explores the depiction of Welshness in-or the contributions of the Welsh to-classic cinema. (Remember our thoughts on Claudette in the radio version of The Corn Is Green?).

Aside from the obvious Hollywood/British fare (such as Corn, How Green Was My Valley, The Citadel, and Carol Reed’s The Stars Look Down), the offerings include Proud Valley (with Paul Robeson), two silent films starring Ivor Novello, WWII propaganda, 1920s cartoons, late 19th-century documentary footage, and the aforementioned Life Story. Noted silent screen composers (including our friend Neil Brand) will be at the festival. I thought you might be interested in mentioning it.

Here is the link to the official site:

Here’s what I had to say about it on broadcastellan: