I’ve gotten to the point with the Coen brothers where I just expect something wonderful every time they make a movie. For me, that was the case even with an effort like True Grit. For others, however, it was different.

When the Coens announced their plans to adapt Charles Portis’ novel, heads turned and were scratched by many. After all, not only were the brothers going to adapt a book, something they had done only once before (twice if you count The Odyssey), but they were going to remake a movie made famous by John Wayne in 1969.

To many, especially lovers of Westerns, touching True Grit was sacrilege. But the Coens weren’t deterred, and thankfully so. Their adaptation of True Grit is not only far superior to Henry Hathaway’s 1969 version, it is also a great film in its own right.

The story follows Mattie Ross (Hailee Steinfeld), a fourteen-year-old girl whose father was murdered by the criminal Tom Chaney (Josh Brolin). Given that Chaney has fled and her father will see no justice, Mattie enlists the help of U.S. Marshal Rooster Cogburn (Jeff Bridges), who happens to be both a slovenly drunk and a man known for his “true grit.”

After proving herself worthy of accompanying him, Mattie and Cogburn set off on a journey across the frontier to apprehend the outlaw. On their way, they’re joined by another man looking for Chaney, Texas Ranger LaBoeuf (Matt Damon).

LaBeouf wants to bring Chaney back to Texas to be tried for a previous crime. The problem is that Mattie is seeking another form of justice: she wants Chaney to hang for the murder of her father. Despite the Ranger’s coldness and outright disdain for her very presence, the adolescent makes her intentions clear to him. The pursuit continues.

For the Coens, True Grit is a remarkably straightforward film. If you’re expecting the kinds of twists and turns found in The Big Lebowski, or the multi-layered narratives of their greatest films, Fargo and No Country For Old Men, you may be disappointed.

But in my view the lack of narrative frills is no setback for True Grit. In fact, the linear storyline feels just right in the Coens’ hands, for they have a deft eye and a capable ear for this particular film genre. The brothers not only understand the Western’s inherent symbols, but they also possess a thorough visual grasp of the wide open spaces. In True Grit, we have a simple tale of revenge and justice, told as simply as any film can be told; but the telling is imbued with such care and expertise that it reaches way beyond the mere sum of its parts.

As a plus, the performances are positively superb. For starters, Matt Damon brings a freshness to a role that, as originally inhabited by Glen Campbell, felt awkward and downright silly. Jeff Bridges has a more difficult time, for he has to stand in John Wayne’s Oscar-winning shoes. But the moment I saw Bridges on screen, the very thought that he was in any way trying to emulate the Duke felt laughable. Bridges crafts his own original character, one who belongs to that period and who moves and speaks with the sort of gruffness that conceals a man’s kind heart. 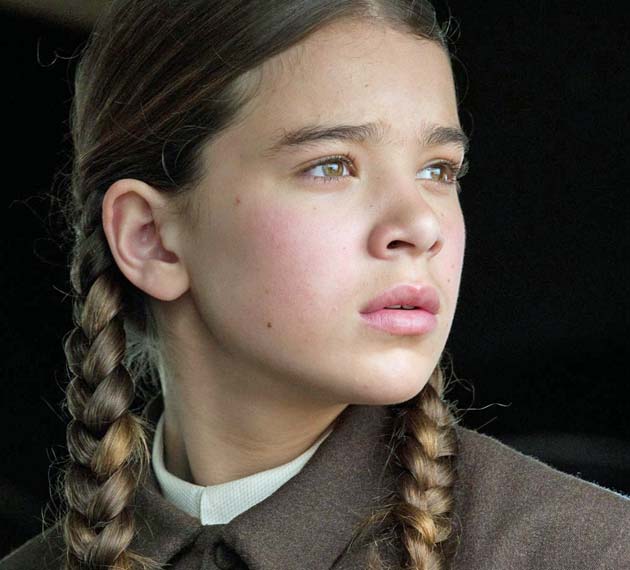 But above all, True Grit rests on the shoulders of Hailee Steinfeld. Plucked from obscurity, Steinfeld embodies the heart and soul of the film, for the Coens smartly decided to stick closer to the novel and focus their adaptation on Mattie Ross, not Rooster Cogburn. The danger was that if their Mattie didn’t pay off, the film would fail.

Luckily, Steinfeld succeeds brilliantly. Her Mattie is a smart, spunky, fast-talking, and quick-witted young woman who knows what she wants and goes after it until she gets it. She’s the Juno MacGuff Diablo Cody wishes she had written. Steinfeld never misses a beat and never seems out of place among the other great and more experienced actors. And she doesn’t just hold her own; she surpasses it.

The film’s additional assets include a beautiful score by Carter Burwell, whose music harmoniously matches the mood of each scene. Roger Deakins, one of the greatest cinematographers working today, does stunning work as well. (I keep asking myself how Deakins hasn’t won an Academy Award yet; for True Grit, he more than deserved one.) And finally, the Coens’ screenplay flows as smoothly as any they’ve written, with the dialogue sounding as much like their creation as like the impromptu verbalization of thoughts by people in the Western frontier.

What more is there to say?

Perhaps a reiteration that True Grit is a great Western that far surpasses Henry Hathaway’s original adaptation. As enjoyable as Hathaway’s movie was, that 1969 movie wasn’t much more than a John Wayne star vehicle. For lovers of John Wayne, that should suffice. On the other hand, the 1969 True Grit left something to be desired for those looking for something more.

Joel and Ethan Coen, for their part, have created much more than a mere star vehicle. The Coens’ True Grit is the remake no one knew they wanted; it’s also that rare remake in an age of remakes that actually deserves its existence. In fact, after watching True Grit I’m just about convinced that it’s okay to say that the Coens can do no wrong. 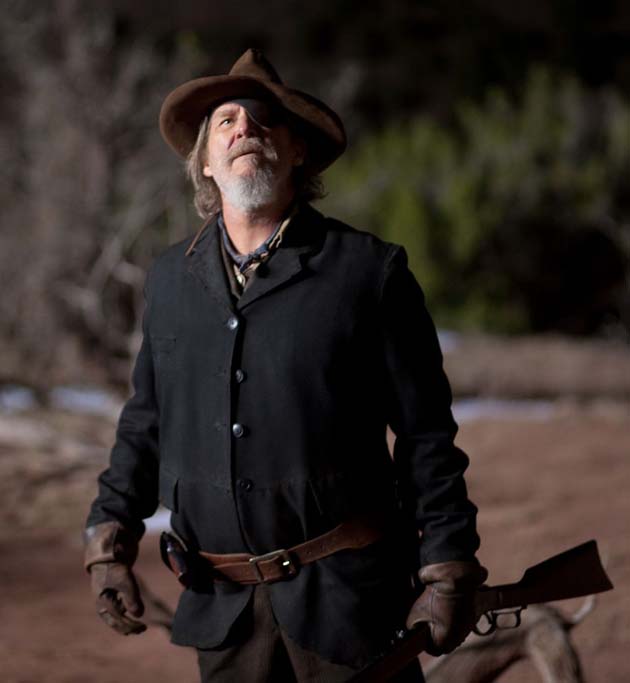 From the editor: Joel and Ethan Coen’s True Grit received 10 Academy Award nominations. Curiously, it failed to win a single Oscar statuette. In fact, True Grit 2010 is one of the top five biggest losers in Oscar history. See below.

The Door in the Floor: Impeccable Basinger in Imperfect Drama

BAH, HUMBUG! Who could understand what bridges was saying-not ME! John Wayne’s portrayal was FAR SUPERIOR and the ACADEMY MEMBERS AGREE WITH ME! The “Fill your hand, you S.O.B. uttered by THE DUKE was exciting and made the audience want to shout “HOORAY FOR ROOSTER, AAN WITH TRUE GRIT!” while Bridges reading of it was DULL and BOORING!.

Watched both movies back to back not long ago, and to my utter astonishment, I preferred the Wayne version. Its both lighter on its feet and emotionally more affecting. And Lucian Ballard, the great cinematographer of The Wild Bunch, was every bit the genius that Roger Deakins is. Wayne’s performance is a real characterization, not a star turn. Compare the camp fire scene where he talks about his ex-wife and misfit son with the same scene in the latter version which is tossed away as an aside on horseback. Bridges mumbles agreeably in that scene and the rest of the movie, but its not an interesting performance. I even liked Kim Darby better. She’s too old, of course, but there are beautiful undercurrents of loneliness and insecurity underneath her annoying bravado. And her chemistry with Wayne is brilliant (even though they apparently hated each other on set). I saw no real connection between Bridges and Steinfeld.

Absolutely correct, except for that no wrong thingy. I hope they don’t follow this masterful film with another ‘Burn After Reading / Intolerable Cruelty / or The Ladykillers’. Those three should be torched in the best interests of film and their reputations.

But as you say True Grit is simply fine by any definition.