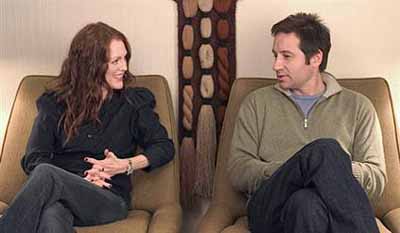 Trust the Man with Julianne Moore and David Duchovny.

Like social scientists who spend too much time with graphics and figures and not enough time out there in the world, numerous filmmakers refuse to depict human interactions as found in life, opting instead to be inspired by sitcoms – which in turn have been inspired by previous TV shows, and those by even earlier shows, and those by phony Hollywood movies, and those by cheap novels, and so on. Ultimately, any speck of truth found in their work is a mere accident.

Bart Freundlich’s Trust the Man is supposed to be a somewhat realistic portrayal of the difficulties facing urban, heterosexual American couples in the early 21st century. In truth, this un-romantic, un-funny, and un-dramatic “romantic comedy drama” is nothing more than a rehash of characters and situations that were already old when one-reelers were first being made.

The story of two highly dysfunctional New York City couples, Trust the Man delivers its cliché-ridden message – men are immature because they are unable to commit; women are mature because they want to have families – in a manner that feels as calculated as the predicament of the film’s characters.

The plot is interspersed with sex, fart, and spitting jokes to amuse twelve-year-olds (must pre-teens be the target audience even for a movie dealing with adults approaching middle-age?); with cheap jabs at lesbians (of the predatory kind, of course) and at foreigners with thick accents; and with music interludes that are supposed to underscore the characters’ emotions but that merely underscore the fact that the Trust the Man wheeler-dealers have an eye on the CD soundtrack market.

Through it all, the four leads – Julianne Moore, David Duchovny, Billy Crudup, and Maggie Gyllenhaal – deliver their lines and hit their marks with the precision of well-oiled machinery. You can actually see the wheels turning as they chug along from romantic crisis to romantic crisis.

And what’s wrong with those supposedly mature women who are stuck with men who have so little to offer them? Can’t they move on with their lives, and either find other partners or enjoy being single?

Instead of cute, the “happy” ending – and in that sort of film, what other kind of ending could you get? – felt quite disturbing. Tom (Duchovny) assumes his role of Father of two brats and Husband to Rebecca (Moore), and will presumably have more sex with his wife and less with his computer. The infantile Tobey (Crudup), for his part, will take up that same Husband and Father role by marrying his long-time girlfriend (Gyllenhaal) and having kids. Besides Freundlich’s push for such a conventional – and simple-minded – approach to acceptable male roles in society, just imagine Tobey’s farting jerk breeding and passing on his DNA to future generations.

Curiously, Trust the Man is to a certain extent a depiction of the filmmaker’s relationship with his wife Julianne Moore. Moore, like Rebecca, is an actress, the mother of two, and the family’s star. Freundlich, like Tom, is best-known as “the husband of….”

In any case, it is unfortunate that a filmmaker who clearly wants to be trusted – so he’ll be known as Mr. Freundlich, not Mr. Moore – has chosen not to trust his audience with an intelligent romantic comedy about real human beings. Next time, Freundlich might want to forget sitcoms and instead check out Woody Allen’s Annie Hall or Husbands and Wives to find out how art can faithfully represent life.

Rebecca (Julianne Moore), a popular New York-based film actress, is about to star in a new Broadway play. Her husband, Tom (David Duchovny), a former advertising executive, has now become the homemaker, taking care of their two little children.

Rebecca’s brother (and Tom’s best friend), Tobey (Billy Crudup), is an infantile, thirty-something man who enjoys farting, grilling sandwiches in his car, and obsessing about death. As another sign of his immaturity, Tobey refuses to marry his girlfriend Elaine (Maggie Gyllenhaal), an aspiring author who wants mature things like a family and children.

As the new househusband in town, Tom suffers from Macho-at-Home Syndrome, finding solace in online pornography and extra-marital sex with a pushy but attractive single mother (Dagmara Dominczyk). Rebecca, for her part, is being pressured on all sides. A cute young actor (Justin Bartha) gives her massages and would probably like to hold her hand one of these days, her prissy director puts her down because she is a film actress, and Tom wants doggie-style sex all the time.

Meanwhile, Elaine is frustrated with Tobey because he seems to care more about his old car than about passing on his DNA.

What are poor, romantic, (supposedly) mature women to do with those male pigs who can only think about farting, kinky sex, and old cars? They kick the men out. Oh, how the guys suffer!

Tobey, after refusing to make out with the sexy (and married) Faith (Eva Mendes), ridicules Elaine’s new boyfriend (Glenn Fitzgerald) – he’s a foreigner with a heavy accent – and even though his penis is smaller than the foreigner’s, Tobey manages to win Elaine back by doing a I-Love-You performance in front of the audience at Rebecca’s opening night.

The Hobbit Behind the Scenes with Peter Jackson + Taylor Kitsch in...

Maps to the Stars Trailer: Robert Pattinson Gets Intimate with Julianne Moore