Tsotsi: One Thug and a Baby in Socially Conscious South African Film 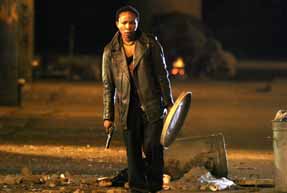 Mostly spoken in South Africa’s Tsotsi Taal, or “gangster dialect,” Tsotsi is the tale of a Johannesburg shantytown hoodlum nicknamed Tsotsi, or “Thug,” who rediscovers his humanity after accidentally kidnapping an infant during a carjacking.

The premise, of course, is utterly absurd. Director-writer Gavin Hood’s screenplay – based on Athol Fugard’s significantly more downbeat Apartheid-era novel – never convincingly explains why the brutal, heartless Tsotsi (Presley Chweneyagae) would want to keep the child. True, the baby is a reminder of his long-buried childhood – he had lost his mother to AIDS and had suffered at the hand of his alcoholic father – but by keeping the baby Tsotsi is putting his own life at risk when he could have either made good money by selling it (back to its parents or to someone else) or thrown it into a trash bin.

Luckily, Hood’s sturdy direction generally skirts the sort of cheap sentimentality inherent to such tales. Additionally, Tsotsi‘s potential cheesiness is counterbalanced by Zola’s gratingly loud rap score and by scenes of nasty violence in the dehumanized South African metropolis. Tsotsi plays a key role in one such sequence, going on a beating and kicking binge that nearly kills one of his fellow thugs.

Following his decision to become the baby’s surrogate father, Tsotsi forces a fellow shanty dweller, a young mother named Miriam (Terry Pheto), to breastfeed his foundling. Since Miriam also happens to be a widow, she has enough room in her heart to play the role of mother to both the baby and Tsotsi (minus the breast-feeding). As his tentative relationship with Miriam and the baby grows deeper, Tsotsi gradually rediscovers that there is more to life than robbing, murdering, and beating up other people.

As Tsotsi progresses from its City of God-like beginning, Zola’s in-your-face rap music is replaced by Mark Kilian and Paul Hepker’s deeply melancholy score. From then on, Hood avoids the usual melodramatic pitfalls by adding psychological nuances to his characters and sociopolitical ones to his story. For instance, Tsotsi may have a “good” side, but he never comes across as a poor little misunderstood shantytown angel.

Also, instead of focusing only on the safer issue of racism (see Crash and nearly every “socially conscious” American film featuring black people), Hood opts to go beyond his characters’ skin color. In Tsotsi, ethnicity plays a secondary role to the more complex issues of class and social disparities, power vs. powerlessness. Although the shantytown dwellers are all black or part-black, so are the wealthy couple whose baby is kidnapped, and the businessman who gets killed for his valuables while riding the subway.

As a plus, this beautifully shot film – courtesy of cinematographer Lance Gewer – offers a capable performance by leading man Presley Chweneyagae, and a superb supporting turn by Jerry Mofokeng as an embittered crippled man.

Though hardly a great film, Tsotsi is a good – and surprisingly quite moving – effort.

Note: A version of this Tsotsi review was initially posted in November 2005.

* According to a BBC report, “in an apparent replay of the movie Tsotsi, a South Africa thief returned a baby he found in a car he had stolen.

“Police contacted the man by calling a mobile phone stolen at the same time. The thief then delivered the child to an agreed place.”

So perhaps Tsotsi‘s basic plot line is not that absurd, after all…

I agree that “Tsotsi” has more complexities than your average movie tying criminality to racial discrimination.
That was a good approach found in the screenplay and that director Gavin Hood was able to use very adroitly.
I had no idea I was going to appreciate “Tsotsi” so much. The direction, the script, the performances are all very good.
A remarkable film that I’d recommend.