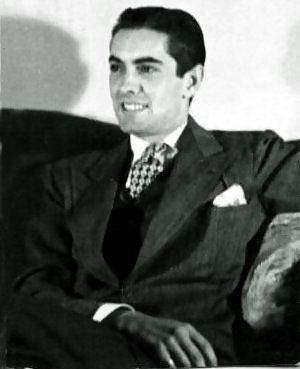 Rumors of a Tyrone Power-Errol Flynn romance. Total myth? Is there any evidence that Power was at all attracted to men or is that just make-believe?

Okay, you asked for it. I am going to go on and on and on about this because I have had to do so much research and had to fight so hard to get a half-decent Wikipedia page for him – and that’s all it is, half-decent. So forgive me if I’m endless.

I sincerely doubt the Power-Flynn thing is true. Peter Viertel, who wrote the screenplay for The Sun Also Rises, was incensed when my old boss asked him that and insisted that there was never any affair. There is no evidence of Power being attracted to men. However, that doesn’t mean that he wasn’t bisexual at least at one point in his life.

I want to be clear about this. I do not know that for certain. I can’t discount it like I can discount a lot of other things. And I have no understanding of why he has to be gay or straight. I don’t really know, frankly, why anybody has to be gay or straight 365 days a year, 24/7. I don’t think life works that way for everyone. For some it does. For many, it just doesn’t.

Errol Flynn himself said when he first came to Hollywood, he tried everything. I can’t imagine that Power and other men and women who were that beautiful and desirable didn’t go to their share of wild parties, try drugs, drinking, the same sex, whatever. I’m a child of the ’60s, and I can tell you that all of the above took place in the ’60s; certainly, the era of the ’20s and ’30s in Hollywood was similar, the mores in Hollywood being ahead of the general population. Errol Flynn also said he never pursued a woman – they were in his bed, under his bed, everywhere, and I believe him. I believe that was true of Tyrone as well. I mean, look at him circa 1938. Who could resist him?

Many people who consider themselves straight have had sex with someone of the same sex; and no matter what, there is something called bisexuality, though many gay people disbelieve that. I think Tyrone may have tried it when he was younger, and I have known people who have had sex with both and then settled on one, and I know people who have dated bisexuals. I also know people who consider themselves bisexuals. I saw some women on Oprah who were married and became lesbians, who said that although they have an attraction to men, they want to be “gender-identified.” I have known men like that too – they considered themselves gay and didn’t give into feelings they had for women. I have met people who tell me they fall in love with individuals and that gender isn’t an issue.

I would say, whether or not Tyrone had bisexual experiences, that most of the stories one hears can’t possibly be true. That doesn’t mean that a couple don’t have a shred of truth to them, but come on, it’s too late now to sort them out. After 60+ years, you can bet they’ve been added to and exaggerated. Go ahead and tell someone a rumor and follow it – see how fast it’s embroidered. I’ve been a victim of that myself with my own writing on the Internet; I’ve had things attributed to me that I never said, while quoting something that I did say.

I have a great advantage in that I go back to the ’60s with Tyrone. I now see quotes that I read in the ’60s that have been mightily changed! Well, I read the original quotes; I saw the people quoted interviewed originally.You aren’t going to pass those additions off on me as true. There is one quote about him said by Darryl Zanuck, to which has now been added, “I know he’s a big sissy.” Darryl Zanuck never, ever said that. Never. The original quote was in [Zanuck’s autobiography] Don’t Say Yes Til I Finish Talking, and those words were added by someone else later. There are several other quotes that have circulated the Internet that are completely bogus, and also some completely bogus stories. The kicker is that the same stories are told about other actors as well. So who were they originally about? I don’t know.

All this stuff that supposedly everybody knew and never said anything – give me a break. If all these stories were true about him or about most of these actors, these men would have been susceptible to constant blackmail and their careers would have been over. The studios knew absolutely who was gay, and each studio had its own way of dealing with it. None of them did nothing when it came to their gay leading men and women. The directors, the character actors, they were the lucky ones because the studios didn’t bother with them.

a rumor is a lie that someone is trying to make true………… sad people cover other people with mud, just to make themselves feel better.

I read a book called “From Rags to Bitches” by the guy who used to do the “worst dressed list”…I forget his stage name now(Mr Kenneth or Mr Something). He mentions Ty Power being a part of that crowd with Randolph Scott and Cary Grant. This Rags-to-Bitches author says he was in the midst of all of that when he came to Hollywood and got seduced by all those guys, and loved it. Then there’s the more recent book called “Full Service” which lists a lot of the folks who kept the party going. I don’t remember if he mentions Ty Power but he certainly brings in a bunch more characters.

The thing about whether or not certain actors and actresses may or may not have been gay or bi sexual was that the studios zealously guarded whatever the true situation was and the press and media did not pursue the matter in any meaningful fashion as they do now on a daily basis. It was hushed up back then and only spoken about in whispers and in private and this is why those actors and actresses that indulged in that lifestyle could do so in the safety of secrecy. What went on in those days would certainly not be secret for long in this world of constant surveillance and the insatiable appetite magazines have for saucy titbits to satisy a public hungry for scandal.

i am sure that tyrone and erroll were lovers at some time or another as i have seen old black and white pictures taken of them both totally naked together aboard errolls yacht called the schirocco.the pics are very homoerotic as they are rubbing sun tan lotion on to each others backs and massarging each other,you should see the pics and judge for your selves?.

Rumors ARE precisely that “RUMORS”!

Ironically; I was NOT a BIG Rock Hudson fan; in fact, I rarely look at any of his movies (except Ice Station Zebra, which holds a personal touch for me).

But I have a lot of trouble, seeing all these accusations, so-calledly proven, …AFTER-THE-FACT, with the person dead and unable to defend themself.

PERSONALLY, I don’t ‘Give-A-Flying-Fig-In-France’ whether or NOT he was Gay; I personally get annoyed at the nearly fanatical attitudes of those accusing him of being Gay long-after the man is dead; that really annoys me that there is so much emphasis and enthusiasm in doing so. LET-IT-REST!!! Regardless, LET THE MAN DIE IN PEACE!!!!!!!!! That’s my biggest issue.

Saying someone is gay does not translate into a vilification or “accusation” of that person’s character. Rock Hudson *was* gay. That’s a fact. He can still rest in peace.

The only reason I responded to your comment was because you implied that he wasn’t. And you were wrong. That’s it.

I too very much doubt that Tyrone Power and Errol-Flynn were gay. These men were movie idols, and as such, subject to the envy and jealousy of a variety of audience onlookers.

I remember watching a program that illustrated in excruciating detail that Errol Flynn’s sexual molestation case was a set-up by his accuser. That particular perspective was NOT made too public because it ruined the tabloid, conspiracy theorists and gossip-mongers that permeated the resultant history that we know of today.

When, absolutely, ALL the evidence of a case is proven and presented, the existing verdicts in many cases prove to be contradictions of the, so-called, known history and no-one WANTS to believe them, …ESPECIALLY “IF” it’s true. Truth is harder to accept than tabloid fodder; it doesn’t sell newspapers.

I personally am sick of the warped interpretation about sexuality of early film stars ad that because of some obscurities and such, that by modern, conspiracy theorists, which various scandals mean that such-‘N-such person is Gay or something. I mean the rumor Rock Hudson dying of AIDS precipitated his being Gay really annoyed me because ONLY after his death did this rumor really took hold …ESPECIALLY since back then the AIDS issued was primarily associated with being Gay. Now-A-Days we know better, and that AIDS/HIV can be contracted in a variety of ways NOT related to sex OR being Gay; hence this issue (Gat & AIDS/HIV) is disqualified today because of more-‘N-more education on the matter.

So too is the issue surrounding Powers and Flynn association. Note that when tow (2) women are very good friends they’re labeled Lesbians; when two (2) males become good friends they’re labeled Gay; Cross-gender friendships (male and female) are labeled as romantic AND sexual. No-matter what personal associations are, third or NON-involved parties always try to throw a wrench and trash them with tabloid fodder ad gossip; out of jealousy? That’s what I feel is the primary source of gossip and motivation in these cases; JEALOUSY.

Rock Hudson *was* gay. There’s no question about that. And the “rumors” about Hudson being gay had been in circulation since the 1950s.