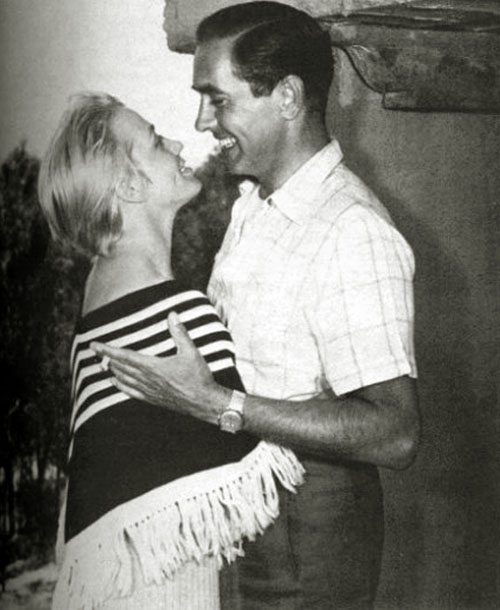 The other thing that cracks me up – and I’ve done a study of this – if someone is outed as gay in a book, the next tell-all that comes out lists that person as someone’s gay lover, whereas in previous books, that liaison was never mentioned. A great example is Marlon Brando. A book comes out about him and now he has slept with absolutely every single man who ever walked the earth. Absolutely no discretion on Marlon’s part – if an author said someone was gay, Marlon got into bed with him. If I were gay, I’d be so insulted. Is this what gays want people to believe about them? Wikipedia is a great one for this. Every movie star in it is a gay person who did a little acting on the side.

Here’s another thing no one thinks of. If I had a gay lover who was world famous, why would I go and tell some author about it? Why wouldn’t I get the $500,000 advance or whatever it is for myself? Why wouldn’t I sell the story to a tabloid and collect even $20,000? Elvis’ girlfriends tripped all over themselves to cash in. Where are all these people’s secret lovers? Where are the Hollywood hustlers? I can tell you, I’d have beat a path to a publisher’s door. Why would I let Darwin Porter have all the money?

I’m a journalist and I’m a writer. I have a strong regard for correct facts. It’s as wrong to label someone as gay who isn’t as it is to label someone straight who isn’t, because that’s just not who they were. And I don’t care how “out” someone is or isn’t, their private life is still private, and there is always going to be a lot that we don’t know. I believe the spirit goes on after death – I believe that Tyrone’s did, just like I believe it about members of my own family. But let’s face facts – in Tyrone’s case, the body in question has been six feet under for 51 years! What right did anyone have to make up anything about him? Why wasn’t the truth enough?

You know, after the panel discussions at the tribute with his co-stars, family, friends, some friends of mine told me later – how could he have been gay? When would he have found the time?

Mai Zetterling lived with him for several years and writes quite graphically about their love affair and his opinions of lots of things. It’s very telling. I will say this: a man who likes to have sex with a woman while the lights are on is, in my opinion, straight. A man who calls women “broads” and says they ruined his life, who talks about a woman’s body parts – that’s a straight man. Mai and Tyrone were on the set of The Sun Also Rises and talked about Errol Flynn. Ty said that Flynn’s big problem was he couldn’t keep his hands off of young girls. A lot of people have said that. I haven’t met a lot of gay men who went after teenaged girls as well. You can put a lot on Errol Flynn, but now it’s become excessive. 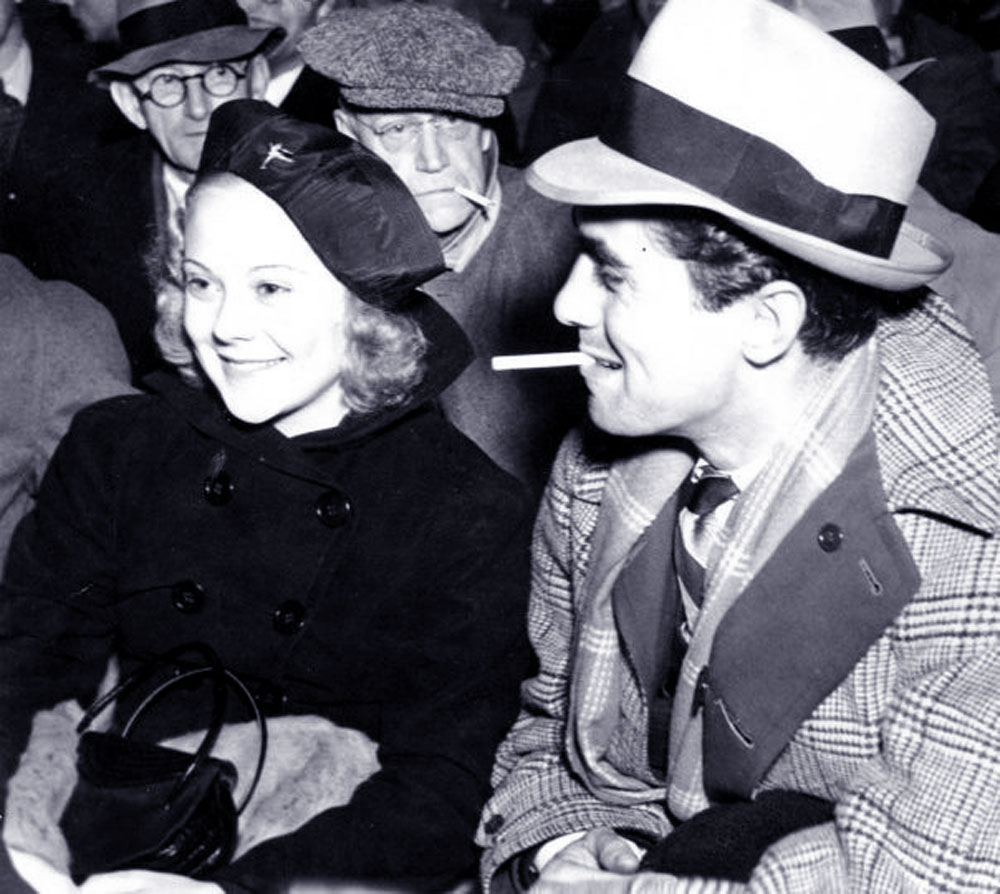 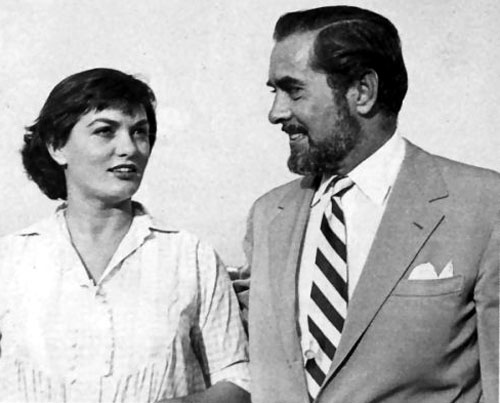 I could find no reference in Tyrone’s letters (many of which I own) or private papers or even an autobiography he started writing as a young man, or in the studio papers, about him being attracted to men. His letters to [wives] Linda Christian, to Debbie Ann Minardos (right), to Annabella, to [lover] Sonja Henie, are quite heartfelt and romantic. Christopher Plummer worked with him in the ’50s and says that Power always was with high-class hookers and fixed Plummer up with a couple; Anita Ekberg followed him the entire tour of John Brown’s Body – I could go on and on.

I think Tyrone was highly sexual, I think he may have indulged in group sex, I think he tried it with guys, and I think the majority of it probably took place when he was younger. But I only know one thing for sure: he loved women. Passionately.

A friend’s mother dated him – she was an usher at the Pantages theater – and another friend told me that when his father worked at a restaurant, Tyrone asked him the name of the pretty hat-check girl. He was always checking out women, and Bob Buck, who flew with him on his tour to South America, verifies this. Matthew Kennedy, who recently wrote a book on Joan Blondell [who has a supporting role in Power’s Nightmare Alley], was asked about Power being gay, and he said he had not been able to find any evidence. Romina Power wrote Cerca Mia Padre about her dad, and said the same thing. After forty years, I haven’t come up with a thing.

This includes my reading the roman a clef, Quicksilver [by Fitzroy Davis], about a tour of Romeo and Juliet that Power was on in 1935, a tour that included stage star Katharine Cornell, Orson Welles, Basil Rathbone, Brian Aherne, and the author, of course. The people in the book, including Power, are easy to identify. The author himself was a gay man, and again, there wasn’t anything [about Power being gay] in the book. There were definite incidents in the book that were written up in the fan magazines about Power later and are in Power’s biography – for instance, he had a larger part until possibly Aherne joined the cast; then they had to give him a smaller one, and his swordsmanship held him in good stead. He gets a screen test – all true, and all attributed to a character in Quicksilver.

Agreed, the binary nature of every aspect of the Anglo world stretches the ridiculous to its limits. In your world, people are either commies or capitalists, genius or moron, good or evil, gay or straight, black or white (Obama’s mother is apparently completely irrelevant to Americans, despite contributing 50pc of his genes & having raised him single-handedly.)

In the end, having sexual encounters with people of either sex, multiple people or animals, doesn’t make one A or B any more than being nice to someone means you Love them or getting into an argument meaning you Hate them. Surely, romantic feelings & sexual attraction must at least be as profound as non-romantic feelings towards acquaintances. Logically very simple truth.

One of the most useless questions asked these days by way of come-on is “Are you gay or straight?”. Unless every gay male will gladly have sex with ANY male & every self-declared lesbian content to shag ANY female, then surely the more apt question would be “Are you interested in ME?”, not “Do you stick your dick only in men or only in women?” (which I will assume to mean that you’re automatically interested in me, as long as I am of the same sex.) Asking one about whom they stick their genitals in is, in itself, a very impertinent, thoughtless & crass question, esp to ask of a stranger.

In older civilisations, such as those on the Mediterranean, from Ancient Greece to modern Italy, sexuality has always been a dynamic, fluid, multi-faceted aspect of the human condition. To label oneself as one or the other is akin to placing all one’s acquaintances into 2 buckets - those one hates & those one adores, with no space for anything in-between. I can tell you that I don’t simply love nor hate every person I know, nor do I want to either shag or kill all those I encounter, either.

Don’t beleave he was gay or bi

i m reading Quicksilver and i m wondering if Power is the character Arthur Fletcher???

As a gay man I must confess to a certain frustration with certain writers who automatically label a person gay just because they engaged in sexual activity with another of the same sex; have we learned nothing over the years of the extremely broad spectrum of sexuality, as well as how its definition has changed over time? Whilst I would refrain from calling them disrespectful, what is most often missing, IMHO, is the context of the times in which these activities took place, especially Hollywood. Yes, actors like William Haines could indeed be said to have been exclusively gay (living openly with Jimmie for about half a century), but Hollywood offered an unprecedented freedom to experiment, a studio system to protect its investment in these actors, and a climate for various celebrities to explore in its heyday. Many whom biographers like to insist today were gay seem to miss the point that what it means to be gay today simply does not correlate with the Hollywood of th 20s thru 50s. Was Power highly sexual? Sure. Did he sleep with men? Probably. Was he bisexual or gay? The tenor of the era doesn’t easily adapt to such labels. But God, he was beautiful.

I think the majority of the stars were bisexual,male and female. Besides all the guys, in female there were Kay Francis,Claudette Colbert, Marlene Dietrich, Garbo,Carole Landis,Barbara Stanwyck. Lets face it, they were young people with their sexual juices flowing, and they all partied and drunk constantly. Their inhibitions loosened. Why would Tyrone Power, the best looking guy in the world, refrain from bisexual activity in private, just because of what people think? Of course to the public he is going to say absolutely not. And tell a female lover??!! How often does that happen? Females, unlike males, are generally very repulsed by knowing about their men indulging in gay activity. I don’t know what men find so great about having girls who like other girls, but women do not like their men to like other guys. Thats just the way it is. as for William Eythe, Zanuck had millions of bucks invested in Tyrone. He was a superstar. he loved him. He would conceal it if he knew he had any interest in males. William Eythe was nothing to him. He hadnt proven his boxoffice worth,so he just got rid of him. I also think he did the same to Eythe’s lover, Lon McCallister, who wasnt going to ever be a star. But firing Tyrone Power was not gonna happen. This was pre Marilyn, and Betty Grable would have been his only box office powerhouse.

This is an ancient article so no one will read this. I just want to say I agree with the comments, save one. I want to point out that the head of Universal Studios hid Rock Hudson’s sexuality- by having him get married. When Tyrone wanted to marry Annabella, Zanuck offered her films out of the country. She wouldn’t leave. Then Zanuck had her blackballed and gave Tyrone Daytime Wife as punishment. You think Zanuck hadn’t invested in Annabella? She was a huge star in France, brought to Hollywood for a reason.

What I am trying to say is - I believe in the fluidity of sexuality in many cases, Tyrone as well as others. I am not sure the Zanucks knew anything about that part of his life. If that were the case, he would have pushed his star down the aisle. Instead he fought him.

I have read letters from Henry Hathaway’s wife Skip and many others, many of whom knew Tyrone and were on location with him. One person wrote he was spoiled and should be concentrating on his career instead of women (this was pre Linda, when he really had a career downturn). Whatever he did, to quote LA Confidential, and I am sure it was something, was hush-hush and on the QT.