The biggest non-human movie star of the 21st century, Uggie, whose scene-stealing cuteness helped to earn Michel Hazanavicius’ The Artist the 2011 Best Picture Academy Award, has died. According to his official Facebook page, he had been suffering from prostate cancer and was euthanized last Friday, Aug. 7. Born in 2002, Uggie was 13 years old.

We regret to inform to all our friends, family and Uggie’s fans that our beloved boy has passed away. We were not planning on posting anything until we healed a little more but unfortunately somebody leaked it to TMZ and they will be announcing it. In short, Uggie had a cancerous tumor in the prostate and is now in a better place not feeling pain. Thank you for your support, I will not be reading any comments for a while as it is too painful at the moment.

At a young age, Uggie was rescued by animal trainer Omar Von Muller, who learned that the energetic terrier was to be sent to a local pound. From then on, Uggie lived with Von Muller and his family in North Hollywood.

One of the few animal movie stars

Uggie was a rarity in recent decades. His presence in The Artist was as important to the plot as that of the film’s human leads. In that regard, Uggie was a throwback to a handful of canine stars of the studio era.

Back in the 1920s, the German shepherd Rin Tin Tin, a World War I foundling brought by an American soldier to the United States, saved lives and fattened the coffers of Warner Bros., then a smaller-scale studio. Rin Tin Tin (a.k.a. Rinty) was so popular that he starred in tailor-made vehicles – e.g., Clash of the Wolves (1925), While London Sleeps (1926), A Dog of the Regiment (1927) – with humans such as Helene Costello, Charles Farrell, June Marlowe, and Louise Fazenda supporting him. (Despite his undeniable popularity, the story about Rin Tin Tin winning the first Best Actor Academy Award is downright absurd.)

And long before Rin Tin Tin, Lightin’, and Strongheart, The Guardian contributor Pamela Hutchinson reminds us that there was Blair, British filmmaker Cecil Hepworth’s dog, “who starred in Rescued by Rover (1905), a deceptively simple chase film that remains a landmark in film history and was so massively popular on its first release that it was remade twice, because the original negatives wore out.” (More on Hutchinson’s piece below.)

In the 1930s, fox terrier Skippy (as Mr. Smith) was the object of contention between divorcing couple Irene Dunne and Cary Grant in The Awful Truth (1937). As Asta (his best-known moniker), he helped William Powell and Myrna Loy solve crimes – and got drunk on champagne – in The Thin Man (1934) and a couple of its sequels. In Victor Fleming’s 1939 fantasy The Wizard of Oz, Judy Garland went on her adventure with Toto, played by the Cairn terrier Terry.

The following decade, the collie Pal (as Lassie) braved war-torn Europe to return to the arms of Roddy McDowall in Lassie Come Home (1943) and helped embittered widow Jeanette MacDonald rediscover the beauty of life in The Sun Comes Up (1949).

Fast forward to 2011. Who needed CGI monsters, dinosaurs, and robots when you could root for a little Jack Russell terrier dashing out in a desperate attempt to save the life of a faded, suicidal silent movie star?

And never mind that some of Uggie’s running scenes were reportedly performed by his stunt doubles Dash and Dude. The Artist would have been a much lesser film without him. 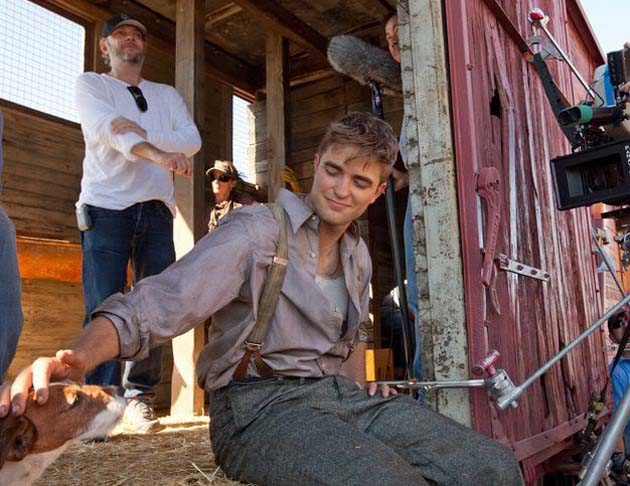 Uggie on the ‘Water for Elephants’ set with Robert Pattinson.

Besides The Artist, Uggie (sometimes spelled as Uggy) was also featured in a few other movies released in the last decade, including Francis Lawrence’s circus drama Water for Elephants (2011), starring Reese Witherspoon, Robert Pattinson, and Christoph Waltz (Uggie played Queenie), and Jay Roach’s comedy The Campaign (2012), with Will Ferrell, Zach Galifianakis, Jason Sudeikis, and Dylan McDermott.

For his efforts in The Artist, he received a special mention at the 2012 Prix Lumières, which honors French-language cinema.

That same year, the little terrier who almost ended his days in a pound, was in attendance at the Academy Awards ceremony, where The Artist took home five Oscar statuettes. Dressed for the occasion, Uggie wore a black tie and a collar with a dangling miniature Oscar.

In the run up to the ceremony, a campaign was launched to get him an Honorary Academy Award, but that didn’t come to pass. (See also: “‘The Artist’ Dog Star a BAFTA Nominee?”)

Uggie in ‘The Artist’ with Jean Dujardin as a Douglas Fairbanks-John Gilbert-like silent movie star.

Written and directed by Michel Hazanavicius, The Artist not only became the first (almost completely) silent film to win an Oscar since William A. Wellman’s Wings back in the first year of the Academy Awards (1927-28), but it was also the first production from a non-English-speaking country – in this case, France, with some Belgian financing – to take home the Academy’s top honor.

Make sure to check out Pamela Hutchinson’s Uggie homage in The Guardian, in which she writes:

At the end of The Artist, it’s dancing that saves our hero from obsolescence, and we have seen him practising his synchronised moves not just with his leading lady but with his dog, who matches him step-for-step throughout the film. To paraphrase a line first used about Ginger Rogers, Uggie did everything Dujardin did, but backwards and on four legs.

Jean Dujardin and Uggie The Artist image: The Weinstein Company, via The Huffington Post.