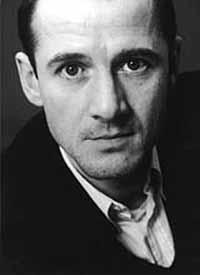 Stage, film, and television actor Ulrich Mühe, winner of last year’s Best Actor European Film Award, died at age 54 on July 22 at his home in Walbeck, in the state of Saxony-Anhalt.

Mühe’s European Film Award was recognition for his excellent performance as a Stasi agent who, while spying on a playwright (Sebastian Koch) and his lover (Martina Gedeck), starts questioning the ethics of his job – and his allegiance to the party line – in Florian Henckel von Donnersmarck’s The Lives with Others / Das Leben der Anderen. Mühe’s performance, in fact, is the best thing about this conventional melodrama that became a huge box office hit in Germany, and that went on to win numerous best film honors in Germany and abroad, including the 2006 German Film Academy’s Lola, the European Film Academy, the Italian Film Academy’s David di Donatello, and the 2007 Oscar for best foreign-language film.

Mühe himself asserted that he was spied on by the Stasi, going on to accuse one of his former wives, actress Jenny Gröllmann, of being a former Stasi informant.

“It took a few years before anyone found a clever way to bring into focus a system that kept 17 million people locked up and under suppression,” Mühe remarked after collecting the best actor Lola last year in Berlin. “I was hoping this film would touch a nerve while we were working on it but you never really know how people will react.”

Born on June 20, 1953, in Grimma, Saxony, in the former East Germany, Mühe trained as a construction worker before serving in the military. According to Der Spiegel, his duties included serving as a guard along the Berlin Wall. Later on, he studied acting in Leipzig at the Hans Otto Theaterhochschule, one of Germany’s oldest acting schools.

In 1979, while in the East German city of Karl-Marx-Stadt (now Chemnitz), Mühe was discovered by playwright Heiner Müller, who took the young actor to East Berlin’s renowned Volksbühne theater. Four years later, Mühe joined the ensemble at the Deutsches Theater.

“The theatre was the only place in the GDR where the people were not deceived,” Mühe would later say. “For us, as actors, it was an island. Where we could speak out and be heard.”

Since 1983, Mühe appeared in leads and supporting roles in more than 30 motion pictures. Among them are Helmut Dietl’s 1992 comedy Schtonk!, which received an Academy Award nomination in the foreign-language film category; Lienhard Wawrzyn’s 1994 political drama Der Blaue / The Blue One, about more East German informants; and Michael Haneke’s 1997 perverse thriller Funny Games, about a family held hostage by two psychos.

His last film role was in Nicole Mosleh’s upcoming psychological thriller Nemesis, in which Mühe appears next to his wife, Susanne Lothar. (The couple worked together in about a dozen films and TV productions, including Funny Games.)

Also this year, Mühe could be seen in several episodes of the television crime series The Last Witness / Der Letzte Zeuge, a well-respected hit in Germany since 1998. In the last quarter of a century, he appeared in dozens of other TV productions, including Kai Wessel’s 2002 Nazi comedy Goebbels und Geduldig (right), in which Mühe plays two roles – Joseph Goebbels and Harry Geduldig (Harry Patient), who happens to be both Goebbels’ double and a Jew.

Ironically, the former Berlin Wall guard was one of several artists who demonstrated against the government before the fall of the wall, declaring to a half-million people on Alexanderplatz in East Berlin that the Communist dictatorship was illegitimate.

Last year, Mühe lost a highly publicized legal battle, being thus barred from referring to Jenny Gröllmann as a former Stasi informant in an autobiographical project of his. Gröllmann, who died last year at the age of 59, had vehemently denied the accusation. (Actress Anna Maria Mühe is their daughter.)

Mühe was diagnosed with cancer in February, but did come to Los Angeles for the Oscar ceremony late that month.

“Art can change your life,” Mühe once told an interviewer. “It holds a power that is so strong that it can melt even a dreaded Stasi officer.”

Hitler Movie Debate: How to Portray Most Hated 20th-Century Leader?