‘Undertow’ Movie: Updated ‘The Night of the Hunter’ Rip-Off 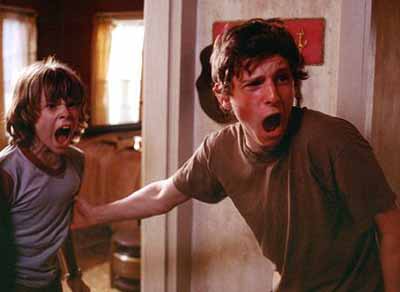 When does the seep of an artist’s talent get to be too much? Is it the first time he ‘sells out,’ the third time, or when all of the early potential has drained away? This was what I was thinking as I watched David Gordon Green’s third effort, Undertow, released in 2004. Oh, it’s not a bad film, but then again it’s nothing more than a stylized, updated version of Night of the Hunter, and that was a vastly overrated mediocrity of a film to begin with, directed by Charles Laughton in 1955, and starring Robert Mitchum as a murderous psychopath who stalks children who run away from him.

What is most distressing about Undertow is that it comes after Green’s first two features – the enigmatic, wonderful George Washington and the lyrical, poignant All the Real Girls. The basic problem is the screenplay – Green rewrote the original screenplay by Joe Conway, from an original story by Lingard Jervey – if one can call such a hackneyed plot ‘original.’ The actual screenplay, in fact, is virtually nonexistent, and what does exist is all refried Hollywood potboiler thriller.

How’s this for originality? Two white trash Southern brothers, the Munns, are reunited. They have a deep, dark secret in their past. One brother, Deel (Josh Lucas), has just gotten out of prison, and the other, John (Dermot Mulroney), has two sons of his own, Chris (Jamie Bell, from Billy Elliot), who impales his bare right foot on a nail, sticking up from a board in an opening chase scene, and Tim (Devon Alan), a budding mental case who pukes all the time because he eats slugs, dirt, and paint.

John stole Deel’s girl, married her, and then Deel went crazy, committed a crime, and went to jail. It seems that John has some family gold coins that are worth a lot of money. Deel steals the coins, kills John, then tries to kill John’s two sons, who’ve run off with the coins, even though he claims that Chris is really his son, since they look more alike and Chris has also been in trouble with the law.

There are some potential moments of characterization, while a realistic family squabble with less melodrama and trite chase scenes would have been far more up Green’s alley, but the fact that Undertow sits on the fence dooms it. That said, both the editing and the film’s look – from stylized negative images and color manipulation, to slow motion and ending scenes with stopped action, freeze frames, and transitional fades – work quite well. Cinematographer Tim Orr’s sepia mindset adds much to the dull narrative, especially in the forest scenes in yellow, brown, and red hues. Philip Glass’ score is solid, though it is as conventional as the film, and nothing like brilliant compositions he created for Godfrey Reggio’s “qatsi” films.

Green tries to add ‘poetry’ by having John tell his boys the coins were given to his dad by a mystic Mexican ferryman who was really Charon, Death’s guide across the River Styx, but too often the film bogs down in the ‘dumbest possible action’ clichés that plague such films. The poetry in Green’s earlier films came from the realistically poetic dialogue, of which the characters were unaware.

Even though Deel has been in jail, and may have escaped – early in the film, we hear on the radio that a convict has fled prison – and despite the older brother’s animus, Chris tells Tim that they can’t go to the cops after Deel kills John because they’ll ‘blame him’ for killing his dad. It’s absurd. Even the ending of the film, where the knife-wielding Deel approaches Chris in a river, after he dumps the gold coins, ends with the boy stabbing his uncle and surviving.

That is where Green totally parts ways with a filmmaker like Terrence Malick, to whom he’s often compared, and who actually produced Undertow. In Days of Heaven, Malick’s 1978 masterpiece, there are also a couple of murders, but the film handles them realistically, if poetically, and there is no tacked-on happy ending where the ‘good guy’ wins.

Especially weak is the last scene where Chris, after surviving – and no, there’s no evidence that the scene is ‘afterdeath’ – is greeted by his grandfather (Bill McKinney, who played the sadistic murdering rapist in Deliverance) in a touch of in-joke irony Green employs. Also, the words that young Tim speaks in voiceovers, mostly about chiggers, is not nearly as believable, poetic, nor evocative as those spoken in Days of Heaven by the young girl narrator, nor even those in Green’s first two films, which he wrote alone.

Of course, there is also a vagabond druggy girl, Violet (Shiri Appleby), who provides a few minutes of a love interest for Chris, but that relationship also goes nowhere. On the positive side, there are a few scenes involving strange characters, such as a black couple that harbor the boys until, in another ‘dumbest possible action’ twist, the wife unwittingly gets Deel back on their trail (as well as her bizarrely going on about her own son’s death due to her lack of breast milk – as if any adult would speak that way to children who are total strangers). There are also a couple of tow truck drivers who are daft, and one (Pat Healy) who prattles on aimlessly about the hilarious things their job consists of.

Had Undertow focused more on the family and characters like those, it could have worked. Instead, it takes the easy way out, right from the opening voiceover and epigraph, which, like the original The Texas Chain Saw Massacre, tries to pretend the film is based on real events. It’s not.

(Another near faultless warning about the film comes from its being labeled a ‘masterpiece’ by Roger Ebert, the same film critic who called Steven Spielberg’s atrocious Saving Private Ryan and Schindler’s List by the same term. Any time Ebert goes over the top when praising a film, it usually means the screenplay is horrendous. But then again, Ebert penned the unbelievably bad screenplay for Beyond the Valley of the Dolls.)

The MGM DVD is in a 1.85:1 aspect ratio. There is a trailer, photo gallery, some deleted scenes, and a “making of” documentary called “Under the Undertow,” made by Josh Lucas. The film commentary, by Green and Jamie Bell is unenlightening. Green tends to play the frat boy in his commentaries, for he rambles on about minutia as key scenes play out, which if he commented upon a viewer might get to understand the process of filmmaking even if the scene itself fails. In fact, all in all his commentaries are fairly pointless. The same could be said of the flights of fancy, such as trying to make Undertow into a ‘fairy tale’ – with the Greek references and the writing of wishes put into a bottle that is tossed into a river.

Rumor has it that Green is working on adaptations of two recent books that contain dubious potential for him to expand his visual art – Brad Land’s atrocious memoir of frat boy hazing, Goat, and Sue Monk Kidd’s ‘mystical Negroes’ novel, The Secret Life of Bees. Is there no end to the bastardization of art? Apparently not, but such bastardy takes willing participants, and Green should be severely chided for moving away from his unique style. He was on the cusp of greatness with All the Real Girls, and perhaps becoming not another Malick, but an American Ingmar Bergman. Instead, Undertow is a major step backward for Green and for American film’s future. Too bad his audience had to dosey-do with him.

Lillian Gish Bowling Green University Theatre Is Gone: The Outraged Ones vs....

You missed just about everything that was going on, anyone can see the black woman was fey, the pair left of centre from immersing in a sidelined fantasy life kicked off by grief etc and you re going on about ohno one would SAY such a thing lol.

I can’t believe anyone thinks the ending is literal it seemed the complete opposite to me.

sorry folks, but based on the first and last scenes, i believe the kid crossed the river with charon….and he was underwater for a very long time.

I liked this movie very much ..the only reason I had to read your review that put it down was cuz I was not sure if the oldest son did survive..thankyou ..I now no he did n I like that even better!!

Hi I saw Billy Eliot Movie and I liked so much because I cry with the movie…haha!!and I like when the Friend of Billy tells he that he is Gay!OMG…and then Michael kiss Billy…awwww!is so cute ! ILY Jaime Bell!

This is your first film review that I mostly disagreed with, of course, the caveat being that I have a personal bias towards Green as being one of my favorite working directors.

Nevertheless, I do agree that Undertow is his weakest film finished up to date, all due to the script. Unfortunately, this being his first foray into the established Hollywood realm, some growing pains in that political arena were to be expected from a director used to being the complete and independent auteur. I still thought other aspects of the film were better than how you have portrayed them, however.

I thought the acting was superb particularly from Jamie Bell, who is British, playing a poor Southern redneck. This was all Direction and Green flexed his mastery in getting the best performances available from his cast. Of course, we’ve seen this before from talented Brit actors (think Mimi Driver and Eddie Izzard in “The Riches”), but the devil in the details of this aspect of Southern life is what brought home the poignancy and visual poetry for me, an understanding from a Director in intimately knowing the flaws and foibles of this aspect of our American society.

Also, the symbiotic working relationship between Green and Orr continues to be one of the most brilliant collaborations between a Director and DP in film today. The lighting, the mood, the anxiety and manipulated tension, the camera movement, and the mise-en-scene, are all reasons, almost independent of each other, of why this film is a must see, in my opinion.

I am still looking forward to Green’s next offering, Snow Angels, and can only hope that the more Green gains creative clout within the hated established Hollywood environment, which pays a hell of a lot more money but which can be at times a creative and political quagmire, the better he will be able to get back to the kind of films where he has showcased his genius.

Also, perhaps unrelated, a few months back I felt a sense of disappointment when I saw on YouTube that Green had directed an ESPN commercial. To this day I cannot explain my disappointment even though in the business I work in (news) I have to do things that are not that creative for money every day, imperfect as I am in not being able to consistently realize my ideals of not compromising my art for money. A better educated person than myself in the strengths and artistic merits of advertising campaigns needs to criticize the following commercial: