Van Johnson Pt.2: The Boy in the Closet Next Door 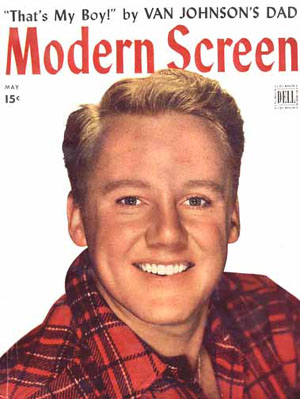 “A project of his time, Van Johnson illustrates the fantasy world that Hollywood projected during the 1940s and 1950s,” writes Ronald L. Davis in Van Johnson: MGM’s Golden Boy. “… Any dishonesty in his life was part of a desire, dominant during the heyday of Hollywood’s big studios to produce pristine likenesses of an idealized society in which all but the most indolent sought the glories and riches of the American dream fulfilled.”

Needless to say, in the mid-20th century the glories and riches of the American dream fulfilled could never have belonged to a guy sexually attracted to other guys. As a result, Johnson, who had such inclinations, thought it best to play the game. (And if you think things have changed much, imagine if Michael Phelps or any other widely publicized “Boy Next Door” turned out to enjoy sex with other men. Perfectly legal behavior, mind you; nevertheless, you can bet that their multi-million dollar marketing deals would go up in smoke faster than Phelps’ infamous weed.)

As to be expected, the US-media has gone right along with the MGM-produced Johnson farce – so much so, in fact, that even in their Van Johnson obits mainstream news sources such as the Los Angeles Times, the New York Times, the Washington Post, and the Associated Press failed to mention the actor’s efforts to hide his sexual orientation. (See also numerous US-based published obits for the likes of Merv Griffin, Dirk Bogarde, Lon McCallister, et al., in which homosexuality remained a taboo even after death.)

In Evie Wynn Johnson’s 2004 The [London] Independent obit, however, Johnson’s former wife is quoted as having said in 1999, “They needed their ‘big star’ to be married to quell rumours about his sexual preferences, and unfortunately, I was ‘It’ – the only woman he would marry.” According to Evie, MGM boss Louis B. Mayer “was the worst of the lot, a dictator with the ethics and morals of a cockroach. Mayer decided that unless I married Van Johnson, he wouldn’t renew Keenan’s contract. [Wynn was to remain at MGM until the mid-1950s.] I was young and stupid enough to let Mayer manipulate me. I divorced Keenan, married Johnson, and thus became another of L.B.’s little victims.”

(In his autobiography, screenwriter-playwright Arthur Laurents, who was in Hollywood at that time, talks about “a sunny male star caught performing in public urinals once too often [who] was ordered by his studio to get married. His best friends, a young comedian and his wife, divorced so that he could marry the wife.” The 2006 movie Hollywoodland has a brief scene based on Johnson’s alleged sexual escapades.)

I haven’t read either Ronald L. Davis’ or Ned Wynn’s book, yet, so I don’t know what they have to say about the whole Wynn-Johnson-Wynn triangle. In any case, Evie’s separation from Johnson, as explained in We Will Always Live in Beverly Hills, came about after she traveled with him to London in 1961, when he starred onstage in The Music Man, and discovered that her husband had begun an affair with a male cast member, “a boy, really. He’s the lead boy dancer.” 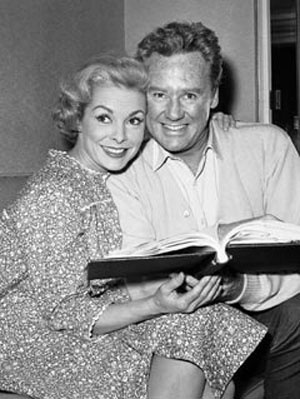 Now, although I find it idiotic that the US mainstream media would not mention Van Johnson’s hidden gay life in their obits and that morons everywhere continue to buy into the Sweet-as-Pie Boy/Girl Next Door b.s. (right, Johnson with Janet Leigh), in no way do I judge the actor for opting to keep himself locked deep in the closet. Honesty, especially if you’re in the limelight, can lead to disaster, as many celebrities both then and now have learned.

So, Van Johnson wasn’t quite like his public image – but then again, who is or ever has been? And whether because or in spite of his (serious) personal issues, the off-screen Van Johnson sounds far more interesting than the insipid, ahem, wholesome characters he subjected himself to playing in order to sate the appetite of audiences addicted to artificial goo.

And he kept on playing that role until the end. “I’m the luckiest guy in the world,” Johnson said in a 1997 interview. “All my dreams came true. I was in a wonderful business, and I met great people all over the world.”

Allegedly, Van Johnson was gay. If he was, in fact, he apparently decided to never come out, and that was his right to do so. For you or anyone else, for that matter, to claim that he was gay was really not your right to do so.

And if wholesomeness makes the writer ill, that’s a shame. We all have our troubles and none of us is perfect, but there are families that are down to earth and generally happy. Apparently, the writer is not one of them.

The writer isn’t “claiming” that Van Johnson was gay. He’s asserting it. That’s his right – his duty, in fact – to write about the facts.

If that offends your (or anybody else’s) wholesome sensibility and family-friendly bigotry … well, that’s nothing a spoonful of down-to-earthness wouldn’t cure.

I cannot believe the urinal area for his sex one bit. He had better sense than to keep on doing that and he was a very intelligent man. As far as whether or not he was gay means nothing to me whatsoever. I am a very loyal fan of his and love him anyway regardless of what is told of his sexual orientation. Evidently he did love his wife Evie, cause Lucille Ball said once she would never forget the time Van came to her in tears saying he was in love with Evie. Lucy had to console him and at this time Evie was married to Kennan Wynn. God Bless Van in Heaven.

Regarding the previous two comments…

a) Only someone who hasn’t actually read the article – or who can’t understand English – could think that the author is out to “chastise and belittle” Van Johnson.

b) Instead of accusing the author of spreading “rumors” and “hearsay” re: Van Johnson’s sexual orientation, leave your own (bigoted) wishful thinking aside and focus on the information imparted by people who knew him personally. Oh, not good enough? In that case, no “lost letters” or “photographs” (of what? Johnson in bed with another man? Get real) would help matters any.

c) And finally, before spending time typing out your anti-fact rants, you might want to check out the comments section in the previous article.

If you want to write a diatribe about how Van Johnson’s secret lifestyle should be written about, you need to do credible research into the truth of it. Otherwise, you are angry that rumors and hearsay aren’t taken as truth by respectable news organizations. It is no secret that his ex-wife, Evie, was a miserable and broke lady when she started the rumors of her husband. If there hadn’t been so much animosity between them and if she hadn’t resented him because he didn’t give her the money she thought she deserved, then she would have more credibility.
His best friend, Keenan Wynn, who was Evie’s first husband, stated himself in an interview May 4, 1947 in American Weekly that he and Evie had a miserable marriage and had planned to separate earlier but postponed it because of his motorcycle accident. He still visited and ate with the Johnsons after their marriage. MGM was worried about what the “divorce and remarriage” love triangle would do to Johnson’s career. The idea that it was planned to help it was doubtful. He could have easily married another woman to save face.
If you want to blame media for not covering the truth, why don’t you cover it? Otherwise, you are railing writers for not sharing info you yourself seem not to be able to verify. Where are the witnesses, lost letters, photographs, etc? Anyone can make up information and try to pass it as fact. Readers don’t appreciate being fed the line that a lie with no facts isn’t taken is truth only because of ignorance. Well it is ignorance but on the part of pseudo journalists.

why does the writer chastise and belittle Van Johnson because of this part of his personality that was not well known at the time….how many others could we name who are beloved……and so should Mr. Johnson……he was charismatic and one of my favorite actors (I grew up in the 40’s & 50’s next door to a drive in movie and saw lots of them, and he was good actor. Case in point, “Miracle in the Rain” among others….I personally know someone who is gay and you couldn’t find a finer person. He did have a daughter, and she must have thought him a terrible father to let him languish alone in a nursing home……he must have made a fortune in his lifetime…yet that is where he was……and Mrs. Wynn?? did somebody twist her arm….I for one enjoyed his talents on the screen and prefer him to some of the “stars” of today………….

I have always loved Van Johnson ever since I was 13 years old. I remember
seen his studio photo for one of his movies. Since then I have been in love
with him. I don’t care what anybody says about him, I love him just the
same and I am 75 years old. God bless him.

It was a more innocent time and I’m grateful that it was the backdrop of my early life. My dad was a set worker at MGM so I hung around the studio a lot as a kid. Wynn would often stop and joke with me, sometimes on his motorcycle. I once sat next to Van Johnson on a Culver City bus! These are sweet memories of men I now know had all the usual human foibles, triumphs and troubles. And the movies ! How I and my girlfriends swooned over Van’s gentle smile and little boy handsomeness. And Wynn popped up in so many movies…always a solid pro. Glad they were with us.