Veterans Day movies on TCM: From ‘The Sullivans’ to ‘Patton’

On Nov. 11, Turner Classic Movies is presenting five war or war-related films in celebration of Veterans Day. For those outside the United States, Veterans Day is not to be confused with Memorial Day, which takes place in late May. (Scroll down to check out TCM’s Veterans Day movie schedule.)

It’s good to be aware that in the last century alone, the U.S. has been involved in more than a dozen armed conflicts, from World War I to the invasion of Iraq, not including direct or indirect military interventions in countries as disparate as Iran, Guatemala, and Chile. As to be expected in a society that reveres people in uniform, American war movies have almost invariably glorified American soldiers even in those rare instances when they have dared to criticize the military establishment. For that reason, the narrative found in most Hollywood war movies tends to be as simplistic as the flag-waving fervor of their target audience.

One such example is Lloyd Bacon’s The Sullivans a.k.a. The Fighting Sullivans, a 1944 war melodrama based on a true story about five brothers who, after enlisting in the Navy, end up serving aboard the same ship. For starters, these aren’t just any five brothers; they’re five brothers from Iowa. Five young Catholic men from the American Heartland sent overseas to fight in a war that – as far as they (and the filmmakers) can tell – have absolutely nothing to do with their innocent lives amid the golden cornfields. (You’ll have to use your imagination to visualize the golden Iowa luster, as The Sullivans was shot in black and white.)

In fact, from the get-go The Sullivans is nothing more than a pile of tired clichés, featuring characters with corn syrup in their veins; “people” as realistic and as complex as those found in Michael Bay’s Transformers movies of the early 21st century. For despite its real-life basis, The Sullivans isn’t truly about human beings, whether from Iowa or elsewhere. The film isn’t even about the horrors of war and the tragedy of young lives cut short by the boundless human capacity for evil and destruction.

Ultimately, this 20th Century Fox release was nothing more than a cog in the U.S.’ World War II propaganda machine – screenplay credited to Mary C. McCall Jr., from an “original story” (it may have been a much-rewritten screenplay) by Jules Schermer and Edward Doherty. At a time when Hollywood war movies were considered an invaluable tool in the war effort – and taking into account the Sullivans’ real-life tragedy – The Sullivans unsurprisingly ended up nominated for the Best Original Story Oscar (Schermer and Doherty), alongside three other WWII-related dramas (None Shall Escape, Lifeboat, A Guy Named Joe). They all lost to Leo McCarey for the escapist blockbuster Going My Way.

Curiously, this phony, unabashedly sentimental war melo was directed by Lloyd Bacon, the man (at least partly) responsible for some of the snappiest movies made during the Great Depression, from Footlight Parade to, gasp!, Here Comes the Navy. Adding insult to injury, it’s criminal the way The Sullivans wastes Anne Baxter, who, when given the chance, could be a highly effective – or at least a highly enjoyable – actress, e.g., All About Eve, I Confess, The Ten Commandments, Chase a Crooked Shadow.

The flag-waving crowd and fans of tear-jerking “family movies” will probably love The Sullivans. Others will likely feel nauseous next time they see corn bread at the market.

A few more things about The Sullivans: the brothers’ story served as the basis for another simplistic – though, on the surface, more ambitious – World War II drama: Steven Spielberg’s Saving Private Ryan, a 1998 release featuring Tom Hanks and Matt Damon, and that earned Spielberg the Best Director Academy Award.

Now, if you do manage to watch The Sullivans all the way to the end, bear in mind that the very last scene is a total rip-off from the 1929 Douglas Fairbanks star vehicle The Iron Mask. And finally, if the IMDb is to believed, D.W. Griffith star Mae Marsh (The Birth of a Nation, Intolerance) has a bit part in the film, as “Neighbor of Mrs. Griffin.” Keep an eye out for her. 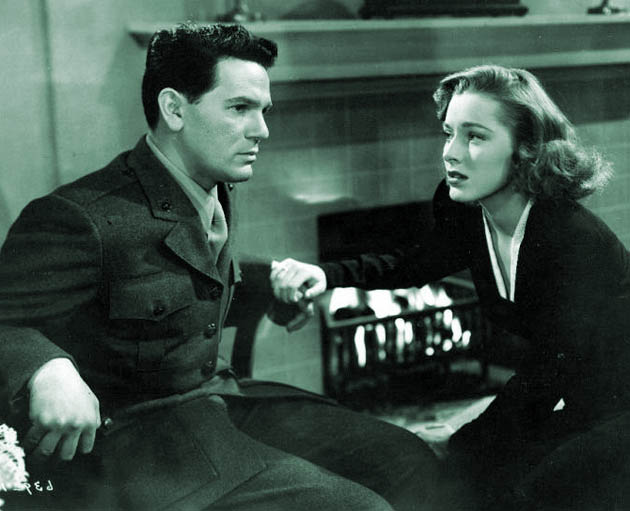 ‘Pride of the Marines’ with John Garfield and Eleanor Parker.

‘Pride of the Marines’

Far superior to The Sullivans is Delmer Daves’ Pride of the Marines (1945), a highly critical look at how American society, ever gung-ho about sending young men (and now women as well) to war, is considerably less willing to lend a hand to these same individuals once they return home. John Garfield, whose social conscience got him in big trouble once the Fight for Freedom ended and the Anti-Red Hysteria began, stars as real-life, blinded-in-action marine Al Schmid, as he attempts to adjust to civilian life.

Garfield is competent in the role, at one point delivering a long speech against the system that would have been deemed subversive even today. In fact, perhaps especially today. As a plus, Pride of the Marines offers Eleanor Parker at her most unaffectedly beautiful; hers is a truly ethereal performance.

Although some of the drama feels contrived and despite chunks of stilted dialogue, Pride of the Marines is a must-see. I should add that its Oscar-nominated screenplay was credited to Albert Maltz, one of the future Hollywood Ten; and that while hounded by flag-waving patriots, John Garfield died of a heart attack at age 39 in 1951.

Another Veterans Day movie: ‘The Wings of Eagles’

In The Wings of Eagles, Maureen O’Hara is Wayne’s neglected wife, while the film’s third wheel is played by former Betty Grable leading man Dan Dailey. Note: Dorothy Jordan has a small role in the film; in fact, The Wings of Eagles marked her final movie appearance.

But who the heck was Dorothy Jordan? Well, an MGM leading lady at the dawn of the sound era, Jordan was featured opposite Ramon Novarro in three musicals (Devil-May-Care, Call of the Flesh, In Gay Madrid). Later on, she dropped out of RKO’s Flying Down to Rio so she could be with her new husband, King Kong co-director Merian C. Cooper – thus paving the way for the Fred Astaire-Ginger Rogers dancing duo. Also of note, Jordan tested for the role of Melanie in Gone with the Wind, but lost the part to Olivia de Havilland.

As for screenwriters Edmund H. North and Francis Ford Coppola’s, and director Franklin J. Schaffner’s technically proficient, but overlong, old-fashioned, and wishy-washy 1970 Best Picture Oscar winner Patton, the best thing that can be said about it is that the movie gave George C. Scott the chance to make Oscar history by becoming the first performer to turn down the Academy’s honor.* It’s just too bad that TCM is showing Patton on Veterans Day, instead of another 1970 war movie: Robert Altman’s biting Korean War-set, anti-Vietnam War satire MASH, which, reviled by right-wingers but (surprisingly) embraced by the U.S. moviegoing public, managed to get shortlisted for the Best Picture Oscar.

I’ve yet to see William A. Wellman’s The Story of G.I. Joe (1945), starring Burgess Meredith as war correspondent Ernie Pyle, and featuring Robert Mitchum in a role that earned him his one and only Academy Award nomination (in the Best Supporting Actor category; Mitchum lost to James Dunn in Elia Kazan’s A Tree Grows in Brooklyn).

The Story of G.I. Joe is considered one of the best World War II movies made during the ’40s. Let’s just hope it’s way better than that other “great,” Wellman-directed World War II movie released at that time, the all-but-unwatchable Battleground (1949).

* Dudley Nichols – whose film credits include Bringing Up Baby (1938), Stagecoach (1939), For Whom the Bell Tolls (1943), Scarlet Street (1945), And Then There Were None (1945), Mourning Becomes Electra (which he also directed, 1947), Pinky (1949), and The Tin Star (1957), was the first person to refuse an Academy Award. That was back in early 1936, when Nichols won the Best Screenplay award for The Informer; at the time, the Academy of Motion Picture Arts and Sciences had become embroiled in a nasty labor dispute. 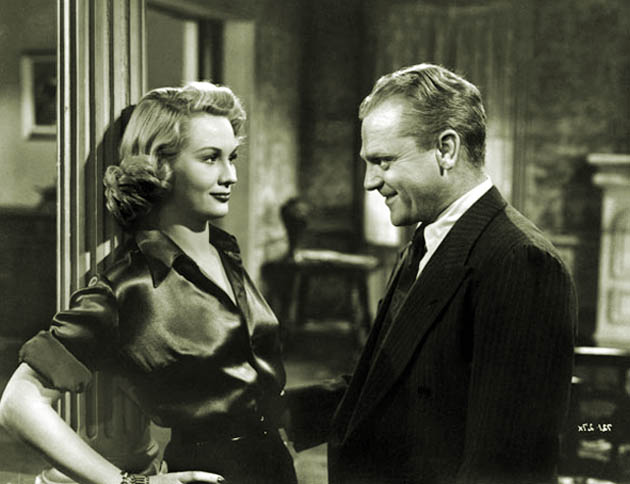 Now, since Turner Classic Movies isn’t showing Dalton Trumbo’s scathing Johnny Got His Gun (1971), starring Timothy Bottoms as the sort of war veteran both the military establishment and flag-waving patriots would like to pretend doesn’t exist, the very best (by then post-) Veterans Day movie to be shown on TCM is Raoul Walsh’s White Heat.

This 1949 crime thriller features Yankee Doodle Dandy himself, James Cagney, as a foaming-at-the-mouth gangster – who knows, perhaps a World War I veteran like Cagney’s earlier gangster character in The Roaring Twenties (1939), but one suffering from a mother-fixation that would’ve done Freud proud. White Heat is likely not only Cagney’s best film but also his best showcase.

Right up there along with Cagney is stage and screen veteran Margaret Wycherly (The Thirteenth Chair, Sergeant York), as the take-no-prisoners Mom who loves her psycho son no matter what. As they say, that’s the beauty of Unconditional Mother Love. See, White Heat is at heart a Family Movie. Also in the cast: Virginia Mayo at her best, Steve Cochran at his best (and at his best-looking), plus Edmond O’Brien.

The Sullivans a.k.a. The Fighting Sullivans trailer: United Artists.

Image from Veterans Day movie Pride of the Marines with John Garfield and Eleanor Parker: Warner Bros., via a blog dedicated to actress Eleanor Parker.

Interesting article but I completely disagree on “Battleground “. One of the best WW2 films and far from a propaganda one.