‘View from the Bridge’ Q&A 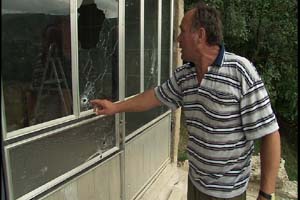 VIEW FROM THE BRIDGE: Part I

What was it like to make a movie in Kosovo, one of the world’s most volatile areas?

LB: Kosovo used to be extremely volatile; production of the film was actually delayed over a year because of outbreaks of violence. When we filmed in 2005, there definitely was some tension there, but it didn’t really feel that unsafe.

JE: Some people told us we should bring flak jackets on the shoot. We didn’t, and we didn’t need them. Kosovo is not extremely dangerous – it’s not a walk down Main Street, USA, either, for sure – and we do try to depict the dangers and trepidations we faced in the film itself. We did have to worry about leftover land mines, we did have rocks thrown at our car when we crossed the bridge the first time, and we did visit a house that had been shot up by an armed gunman just a few hours before.

I think the people who were really at risk in making the film were our Albanian and Serbian producers. Behar Zogiani, our Albanian producer, is a remarkable man. I think he is an amazing asset to the people of Kosovo. He’s a very compassionate, forward-thinking man whom I consider it an honor to have worked with. After the film was screened in Kosovo, we think Behar may have received death threats from some people who didn’t like the idea that an Albanian would work on a film that tried to be balanced and honest.

Jovica Miljkovic, our Serb producer, is a hero to us as well. He’s a bright young man who loves his home, his country, and I think was also under a lot of pressure – even working with American filmmakers is met with a lot of suspicion there; after all, Americans are very much “the enemy.” The scariest part of the whole process, I guess, was knowing that even listening to the other side – or even working with someone who was listening to the other side – was often met with suspicion and derision.

Was there any attempt – from the local government or from the many international agencies – to interfere with your project?

LB: Our main problem came from KFOR (Kosovo Force) troops – the 20,000 or so NATO troops [who are] there to try and keep the peace. Their policy is not to let any media film them, and so there were a number of times when we’d try to get a shot of KFOR troops and they would see us, come over, and make us rewind and erase the tape. Other than that, the international community was very open and supportive. We had UN Press Credentials; the International Committee of the Red Cross was very supportive as well.

I’d also like to point out that the OSCE – Organization for Security and Cooperation in Europe – was very supportive. They actually gave us some wonderful feedback on View from the Bridge to help guide us to make sure the film couldn’t be misused by media outlets in Kosovo and Serbia that had their own biased agendas.

Were there any threats or attacks against those involved in the production of View from the Bridge?

JE: We did get a rock thrown at our car the first time we crossed the bridge in Mitrovica. There are a group of Serb radicals, extremists – whatever you want to call them – who hang around the north side of the bridge and basically try to intimidate anyone who tries to cross. We couldn’t drive our car across at the point since it had Kosovo plates – that would be a recipe for a potential big problem – so we walked across and met Jovica, our Serbian producer, on the North side. We got in his car and heard a big ol’ bang as we drove away. Jovica was very upset, it wasn’t a really warm welcome for his friends from the States. But that’s the reality of life in Kosovo. That there are people around who prefer violence and intimidation to reasoned discussion.

LB: Also, as we mentioned earlier, after the film screened in Pristina we think Behar may have been threatened by some Albanian extremists who felt that any portrayal of Kosovo that included an honest look at the Serb viewpoint was unpatriotic and treacherous.

The production notes on the View from the Bridge website state that “Behar Zogiani and Jovica Miljkovic, the Albanian and Serbian producers of the film, never met during principal photography.” How could that be?

LB: They didn’t. They only met once, after filming was completed, in the middle of the bridge in Mitrovica, so Behar could give a tape to Jovica. It sounds crazy, and it is, but it’s true. There was a brief, delusional moment near the end of filming where we thought we could have a wrap party and get everyone together for a beer, but it just wasn’t to be.

JE: We tried very hard to find stories of Serbs and Albanians working together in Kosovo, but almost every time we set out to film a story of cooperation, one side or the other would get scared and not show up. There’s definitely an atmosphere of intimidation and fear in Kosovo, that even engaging with the other side is an act of betrayal. It took a lot of courage for many of the people in the film just to appear on camera. We owe them a great debt of gratitude. 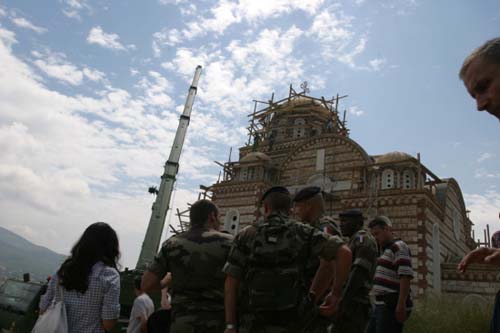 What do you expect to accomplish with View from the Bridge?

JE: At the very least we hope the film provokes people to think very critically, about their media, about their politicians, and about their own role in peacemaking, even on the smallest scale. Kosovo had totally fallen off the media radar because it was no longer “breaking news,” yet there are still 20,000 troops there. It seems more than a little short-sighted to go to war in Iraq and not critically examine the post-war period where we last intervened. Also, I hope the film makes people think about how profoundly damaging the politics of division – the politics of hate – are. We have a choice, to see ourselves as one people with diverse ideas, or as many peoples each with a single idea. I hope the film makes people think hard about that choice.

LB: Our log line for View from the Bridge is “Peace is for the brave,” and I think that really sums up what we hope people get from the film. People associate courage with picking up a gun and killing someone, but it takes just as much – or more – courage to put that gun down and move on, move forward, to recognize and forgive the past and forge something new and better.

View from the Bridge was shot in 2005. Has much changed since then?

JE: We actually shot the film in the summer of 2005. Things have improved a bit there, especially outside of the northern part of Kosovo. There’s a little more freedom of movement for minorities. But the situation in Mitrovica, since it’s the focal point for all the ethnic tension, hasn’t changed that much. Nationalist politicians from Serbia still come to North Mitrovica to hold rallies to help them win elections in Serbia. Politically, things are still at an impasse. There have been years of talks and discussions, but no hint of a compromise. Albanians won’t back away from their insistence on full independence, and Serbs won’t back away from their insistence that Kosovo remain part of Serbia. Right now it looks very much like Kosovo will unilaterally declare independence in the very near future. Everyone’s hoping that there isn’t a new outbreak of violence, but people are definitely on edge.

LB: The situation with the Roma (Gypsies) of Mitrovica is very interesting, and really shows how they are very much stuck in the middle. Many of their homes have now been rebuilt, but very few, if any, have moved back. Not only are they afraid of more violence if they go back, they’re also under pressure from expat Roma who fled abroad – often with amnesty from their host governments. The fear of the Roma expat community that lives outside Kosovo is that if Roma move back to their neighborhood, then Roma who fled elsewhere in Europe will lose their amnesty because they are no longer being “persecuted.” It’s a very complicated dynamic.

There are many who claim that movies don’t influence policy and that they can’t change the world. What do you think?

LB: I don’t think that’s true. I’ve spent my whole career making films about people who spoke up and made a difference, whether it be Holocaust survivor turned civil-rights activist Judy Meisel in Tak for Alt or the grassroots Soviet Jewry activists in Refusenik. And I think View from the Bridge is a great example of how even a small independent film can actually influence and change people and policy.

This year, the European Union (EU) is taking over the administration of Kosovo from the UN. The European Union Planning Team for Kosovo (EUPT), the group responsible for planning and implementing the takeover, has made our film a primary part of its training for all staff in its 27 member states. Helping the EU staff understand and constructively engage with the fractious ethnicities in the province – instead of insulating themselves by just going “from their hotel to their office to the bar and back to their hotel” – has been one of the most rewarding chapters of our careers.

We’ve also screened the film for US troops at Camp Bondsteel in Kosovo, and helping them understand the province and the people as they try to “keep the peace” has been very fulfilling. One US soldier – rifle in hand – actually told us that we were doing as much for Kosovo with our film as they were with their guns.

So do I think films can make a difference? You bet I do.