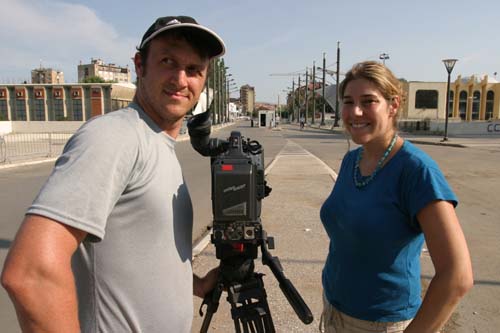 View from the Bridge: Stories from Kosovo filmmakers John Ealer and Laura Bialis.

Directed by John Ealer and Laura Bialis (above), View from the Bridge: Stories from Kosovo, described on the film’s official website as “the first documentary feature about post-war Kosovo,” was recently screened at the Slamdance Film Festival in Park City, Utah.

The bridge in question is located in the town of Mitrovica, which has become a flashpoint in the ethno-cultural clashes between Muslim Albanians, Christian Serbs, and Roma (Gypsies). In order to portray the differences – and similarities – among those disparate groups, Ealer and Bialis opted for a personal approach to their subject matter. Thus, View from the Bridge relies on first-person accounts – “sometimes hopeful, sometimes tragic” – of the lives of those suffering the physical and emotional consequences of the politics of divisiveness.

Among others who worked on the project are American Society of Cinematographers‘s Heritage Award winner Sarah Levy, Academy Award-nominated editor William Haugse (Hoop Dreams), and composer Miriam Cutler, whose credits include Ghosts of Abu Ghraib and the Christopher Isherwood documentary Chris & Don. A Love Story.

Directors Ealer (“JE”) and Bialis (“LB”) have kindly agreed to take part in a brief q&a via e-mail, discussing the making of the documentary, the difficulties they encountered while filming in Kosovo, and the significance of View from the Bridge not only for Kosovars but also for people elsewhere.

(View from the Bridge DVDs are available for sale at www.kosovomovie.com.)

First of all, could you tell us a little about your professional background?

JE: I’m a director of photography and director of commercials, television, and documentaries; View from the Bridge is my first feature doc, it was really a passion project for me. I have a BA in Communication Studies from the University of Iowa and a MFA in Film Production from the USC School of Cinematic Arts.

LB: I went to Stanford and followed that by getting an MFA at USC as well – which is where I met John. I made my first feature doc, Tak for Alt: Survival of a Human Spirit [about civil-rights activist and Holocaust survivor Judy Meisel], while I was at USC. Simultaneously with producing View from the Bridge, I was working on another feature doc called Refusenik. That film, the first documentary to chronicle the three-decade-long grassroots struggle to free Soviet Jews, premiered in December in Jerusalem, so I’ve been busy, to say the least.

How did you become involved with View from the Bridge? What is the movie about?

JE: View from the Bridge is about what happens after the bombs stop falling. It’s an intimate, first-person look at the people of Kosovo as they try to overcome the powerful legacy of the politics of hate and division. When we started making this film, here at home there was talk of “culture war” and “red and blue states” – the US was preoccupied with what I call the politics of division. Kosovo seemed a good place to look at the extreme ramifications of such politics – at the very least, it’s a cautionary tale of where such politics can lead.

LB: I first got interested in post-war Kosovo when I met an amazing UN worker named Diane Brown. Every time she came back from Kosovo, I would talk to her and hear about its struggle – and failure – to recover both politically and societally. I think that in the West we tend to think we’ve escaped tribalism, that we’ve somehow moved beyond it. But with the disintegration of the former Federal Republic of Yugoslavia, I think we pretty clearly see that when politics fuels polarization, no society is immune to violence.

Now, could you explain a little about the conflict in Kosovo – its origins and what it represents today.

JE: The conflict is centuries old, and its origins are really shrouded by national myth and revisionist history. The history of the region is so contentious and so hotly debated that we have to be very careful in describing it.

We know for sure that ethnic Albanians and Serbs have always lived in Kosovo, though their numbers and proportions have changed over the years. And we know that Kosovo was a very important part of the Serbian heartland at the height of the medieval Serbian Kingdom around the 13th and 14th centuries. Serbs see it as the cradle of their civilization; they often describe it as their “Jerusalem.”

Many of the important religious sites of the Serbian Orthodox Church are in Kosovo as well. When the Ottoman Empire overran Kosovo starting around the late 14th Century, part of the population slowly converted to Islam. Over time, Albanians converted in greater numbers than Serbs, so most Albanians today are Muslim, while most Serbs are Christian.

There were outbreaks of violence between the groups over the years, but after World War II Marshall Josip Broz Tito’s autocratic central rule of the Federal Republic of Yugoslavia (FRY) kept things relatively quiet – and relatively prosperous. Under the last constitution of the FRY, drafted in the ’70s, Kosovo was not a republic but an “autonomous province” that had its own government but still was part of Serbia. Though this may seem to be a fine distinction, it is really the seed of the current debate on Kosovo’s status. The Yugoslav republics (like Bosnia and Croatia) had a constitutional right to decide their own status (i.e., had the right of self-determination) if and when the FRY ever dissolved, while, technically speaking, an autonomous province like Kosovo did not.

Slobodan Milosevic took power in the late ’80s, and during his rule he effectively revoked the autonomous status of Kosovo and, by all accounts, subjected Kosovar Albanians to myriad kinds of political, physical, and economic repression. Kosovar Albanians lost their jobs, weren’t allowed to go to university, were subject to special taxes, etc. (For instance, there was a fee that people in Kosovo had to pay to register with the government and get their IDs. The Serbian government kept changing street names so the Albanians in Kosovo would have to pay this fee over and over again. The street names changed so often they lost meaning. To this day, there are only two streets in the capital city of Pristina that have names anyone knows: one is Mother Theresa Blvd, and the other is Bill Clinton Blvd.)

By the time of Milosevic’ rule, the population of Kosovo was about 80 percent Albanian. (Exact figures are really hard to come by.) The political leadership of Kosovo actually adopted a pacifist stance – hoping to be rewarded by the international community for keeping violence at bay – while ethnic violence tore apart Bosnia and Herzegovina, and Croatia. But by 1998, an Albanian guerilla group called the Kosovo Liberation Army was formed and started engaging the Serb forces in Kosovo. The Serb army cracked down quite brutally, and a massive wave of Albanian refugees fled many reported atrocities. Fearing a humanitarian catastrophe, NATO bombed Serbian forces in Kosovo and Serbia proper for 78 days in 1999 to stop the ethnic violence.

The UN has administered Kosovo since then, so the province has kind of been in a political limbo. If you live there you get a passport that says “UNMIK – United Nations Mission in Kosovo.” Technically, it’s still part of Serbia, but Serbia really has very little administrative control over the area, though it does have a great deal of influence in northern Kosovo. Recently, a former KLA commander, Hasim Thaci, was elected prime minister, and he has pledged to declare Kosovo a fully independent state within the near future.

LB: To some extent, Kosovo has now become a kind of political football between the US and the EU on one side and Russia on the other. Many are trying to project what happens in Kosovo as a template for other “breakaway” regions like Chechnya in Russia and Abkhazia in Georgia. So there’s been a lot of attention worldwide on the final status talks on Kosovo. 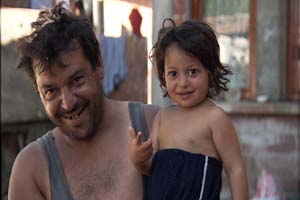 Did you plan beforehand how you’d approach the subject of ethnic violence – or did you develop new insights while shooting the documentary?

JE: Our plan was really quite simple. We wanted to let the people of Kosovo speak for themselves. We didn’t want to have commentators, historians, or politicians speak on their behalf.

LB: We knew that both sides were really quite isolated; they had totally divergent views on the conflict, and neither side really wanted to admit that they had done anything wrong. So we felt that even though Serbs and Albanians in Kosovo weren’t communicating, we could at least juxtapose their viewpoints, and in that juxtaposition, create a good sense of the place. In a way, our idea was to create a dialogue in the film that didn’t exist in the place itself.

JE: The metaphor we went into the film with was a stained glass window. We knew we could collect distinctive and sharply disparate facets of Kosovo, and that it we carefully organized them, we could create a powerful simulacrum – or at least a beautiful sketch – of what Kosovo was really like.

I’d suggest you take a look at the site listed in the beginning of the q&a.