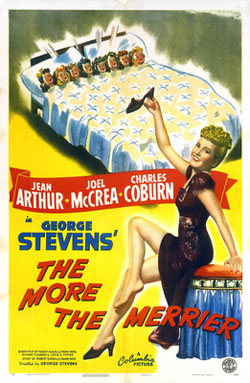 Gone with the Wind, The Wizard of Oz, Dark Victory, Four Daughters, Citizen Kane, The More the Merrier, The Talk of the Town, A Star Is Born, Love Affair, Stagecoach, Libeled Lady, The Awful Truth, and Casablanca are among the 80 Best Picture nominees represented in the Academy of Motion Picture Arts and Sciences’ new exhibition “The More the Merrier: Posters from the Ten Best Picture Nominees, 1936 – 1943,” currently being held the Academy’s Grand Lobby Gallery in Beverly Hills. Admission is free.

The Academy’s poster exhibition focuses on the eight consecutive years during which there were ten annual Best Picture Oscar nominees, an homage of sorts to the 2010 renewal of that old tradition. Among the other movies represented are Romeo and Juliet, Jezebel, Mr. Deeds Goes to Town, Four Daughters, The Philadelphia Story, The Maltese Falcon, Here Comes Mr. Jordan, You Can’t Take It With You, Mr. Smith Goes to Washington, Our Town, Kitty Foyle, Suspicion, Rebecca, Grand Illusion, The Good Earth, The Pride of the Yankees, The Human Comedy, and Heaven Can Wait.

The exhibition will also present the only known three-sheet posters for Robert Z. Leonard’s The Great Ziegfeld, the special British cinema display for Frank Capra’s Lost Horizon, and an original painting by artist Sergio Gargiulo for Victor Fleming’s Gone with the Wind.

“The More the Merrier” is drawn from the collection of Academy member and poster art director Mike Kaplan, and augmented by materials from the Academy’s Margaret Herrick Library. The posters include foreign versions from South America and Europe.

The More the Merrier poster image: Courtesy of the Margaret Herrick Library

Fredric March Movies: Inherit the Wind + Seven Days in May