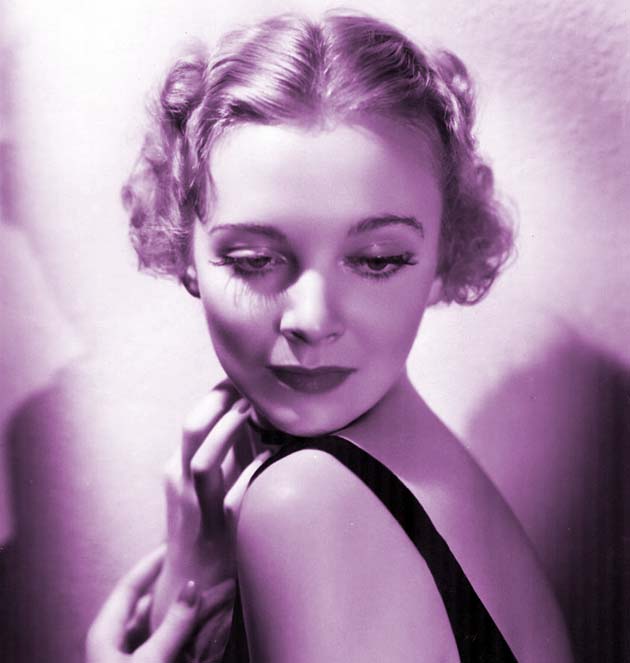 Virginia Bruce movies on TCM: Actress was the cherry on ‘The Great Ziegfeld’ wedding cake

Unfortunately, Turner Classic Movies has chosen not to feature any non-Hollywood stars – or any out-and-out silent film stars – in its 2015 “Summer Under the Stars” series.* On the other hand, TCM has come up with several unusual inclusions, e.g., Lee J. Cobb, Warren Oates, Mae Clarke, and today, Aug. 25, Virginia Bruce.

A second-rank MGM leading lady in the 1930s, the Minneapolis-born Virginia Bruce is little remembered today despite her more than 70 feature films in a career that spanned two decades, from the dawn of the talkie era to the dawn of the TV era, in addition to a trio of comebacks in later years.

Career highlights were few and not all that bright. Examples range from playing the blonde victim of sadistic Walter Huston in William J. Cowen’s so-bad-it’s-atrocious Kongo (1932) – a remake of the Lon Chaney silent West of Zanzibar – to being featured as the elaborately gowned cherry atop a giant, rotating wedding cake in the spectacular “A Pretty Girl Is Like a Melody” musical number in Robert Z. Leonard’s The Great Ziegfeld (1936).

Yet how many performers can say they worked with both silent era filmmaker Monta Bell and Andy Warhol protégé Paul Morrissey?

Aug. 26, addendum: Regarding the question above, the answer would be: “Not Gloria Swanson or Katharine Hepburn or Bette Davis or Joan Crawford or Barbara Stanwyck or Greta Garbo or Sylvia Miles or … Virginia Bruce.” More details at the end of this article. 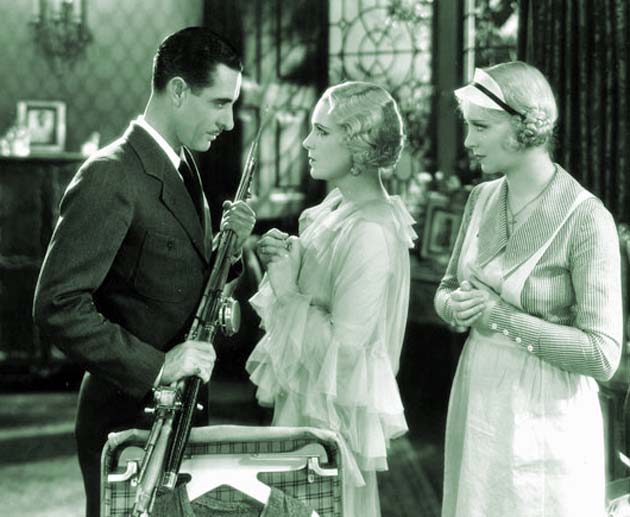 Virginia Bruce and John Gilbert in Downstairs with Olga Baclanova.

This evening, TCM is showing Monta Bell’s Downstairs (1932), in which Virginia Bruce is seen opposite fast-fading silent era superstar John Gilbert – her husband from 1932-1934. Although a money-loser for MGM, Downstairs is probably the best John Gilbert talkie, with the star of The Big Parade and Flesh and the Devil effectively cast in an unsympathetic role.

In the Austria-set drama, Gilbert’s handsome, ambitious, unscrupulous chauffeur comes across as a sort of male, Continental version of Barbara Stanwyck’s all-American secretary in another pre-Production Code cult classic, Baby Face (1933). The one key difference is that instead of using his brain and legs to get ahead, Gilbert uses his brain in conjunction with other body parts. Ah, they really don’t make ’em like they used to.

Virginia Bruce has the title role in A. Edward Sutherland’s The Invisible Woman (1940), a low-budget Universal comedy that was one of the many films nominated for the 1941 Best Special Effects Academy Award. (The winner was I Wanted Wings.)† Of course, if you’re expecting effects of the Avengers: Age of Ultron or Jurassic World variety, you’ll be mighty disappointed. You should also have your brain checked.

But however CGI-less, The Invisible Woman does moderately entertain in large part because the effects are a tad quaint, fitting right into the silly story about a mad scientist who makes a pretty and vindictive model (Bruce) invisible. Enter a trio of bumbling gangsters who think the invisibility machine will make the Mexico-U.S. border crossing easier for their boss. John Barrymore, he who long ago had starred in Hamlet on the London stage, plays the scientifically inclined nut.

As a plus, The Invisible Woman offers a pre-Cobra Woman Maria Montez and a post-The Wizard of Oz Margaret Hamilton.

And in case you’re wondering, the title is the only thing in common between this modest B comedy and the 2013 drama directed by Ralph Fiennes, and starring Fiennes as Charles Dickens and Felicity Jones as his lover.

I should add that the screenplay for The Invisible Woman was based on an “original story” (most likely a fully rewritten original screenplay) by Joe May and Curt Siodmak.

In a previous lifetime, before the Nazi’s ascension to power, the former had been a major name in the German film industry; his directorial credits included The Tragedy of Love (1923), featuring a young Marlene Dietrich, and Asphalt (1929).

The brother of filmmaker Robert Siodmak (The Killers, The Devil Strikes at Night), the latter’s screenwriting credits included cult Universal classics such as The Wolf Man (1941) and the Jane Eyre reboot I Walked with a Zombie (1943). 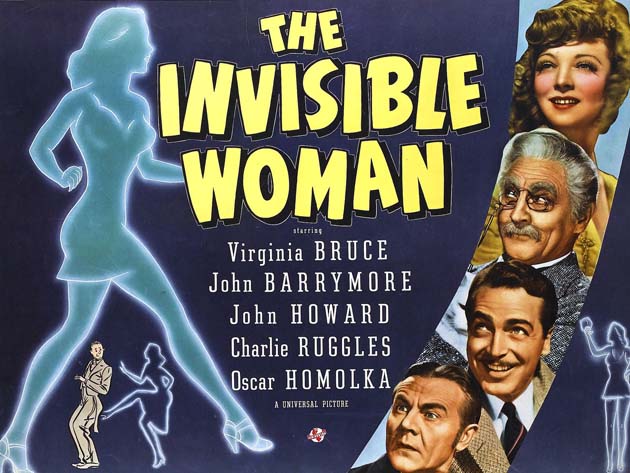 Invisibility, by the way, was “in” at the time The Invisible Woman came out. Blame it on Claude Rains, perhaps, or maybe Topper and ghosts Constance Bennett and Cary Grant.

In fact, Joe May and Curt Siodmak had themselves cowritten the original story for another such 1940 entry, The Invisible Man Returns, directed by May from a screenplay by Siodmak and future Hollywood Ten member Lester Cole, and toplining Cedric Hardwicke and Vincent Price.

The Bad Man of Brimstone

Wrapping it up, The Bad Man of Brimstone (1937), TCM’s final Virginia Bruce offering, was directed by J. Walter Ruben – from a story he cowrote with Maurice Rapf. Ruben and Bruce were married from 1937 to his death from a heart ailment on Aug. 16, 1942, two days after his 43rd birthday.

‘Summer Under the Stars’ silent film and international stars

Anyhow, whether Garbo or Bergman, TCM’s emphasis this year is on English-language talkies.

† The Invisible Woman must have been released in the Los Angeles area in 1941, as it was shortlisted for that year’s Best Special Effects Academy Award. Back in those days, more than five nominees were allowed in most categories.

‘Virginia Bruce: Under My Skin.’

In the initial version of this Virginia Bruce article, I wrote:

It’s too bad TCM won’t be showing Virginia Bruce’s big-screen swan song, the Morrissey-directed Madame Wang’s, in which an East German (Patrick Schoene) looking for revolutionary icon Jane Fonda ends up at a punk-rock Los Angeles restaurant owned by Madame Wang (Bruce). But both Kongo and the ponderous Best Picture Oscar winner The Great Ziegfeld are on today’s schedule.

Of course, barring some last-minute programming overhaul that I’m unaware of, I was right about TCM showing Kongo and The Great Ziegfeld. But I was dead wrong about Paul Morrissey’s little-seen 1981 underground movie Madame Wang’s.

Despite various online sources – including not only the not always reliable IMDb but also the New York Times website and TCM.com – and even people who have actually seen the film, Virginia Bruce is nowhere to be found in Madame Wang’s. Well, at least not the Virginia Bruce who sang Cole Porter’s “I’ve Got You Under My Skin” to James Stewart in Born to Dance and who had the title role in the low-budget 1934 version of Jane Eyre.

After reading my post, Virginia Bruce biographer Scott O’Brien contacted me to explain that the older lady seen (and I’m assuming heard) in Madame Wang’s is actually a male cross-dresser and Virginia Bruce fan – he loved the Kongo actress so much he used her name as his own artistic name.

For the record, Virginia Bruce’s last film role was in Richard Quine’s (extra-)marital drama Strangers When We Meet (1960), as the formerly adulterous mother of the soon-to-be adulterous Kim Novak.

And finally, Scott remarked that, 70 motion pictures or no, there’s no Virginia Bruce star on the Hollywood Walk of Fame. On the other hand, Kermit the Frog, Big Bird, basketball player Magic Johnson, and the Apollo 11 astronauts have theirs.

How to Sell Your Soul: Must-See Long-Thought-Lost Classic Resurfaces