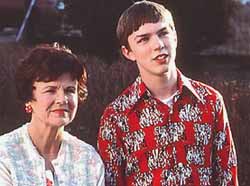 A heartfelt (semi-)autobiographical tale set in a part of the world that’s rarely been seen on screen, and boasting a cast that includes Gabriel Byrne, Emily Watson, and Julie Walters. Those elements should guarantee a solid film experience. Unfortunately, that’s not the case with Wah-Wah, actor Richard E. Grant’s directorial debut.

Set in the southern African kingdom of Swaziland in the late 1960s and early 1970s, when the British colony was about to become independent [that event actually took place in September 1968], Wah-Wah depicts the difficulties of growing up amid the sexually charged, booze-drenched lives of adulterous Englishmen and women living far away from the seat of the by then moribund British Empire.

Despite the filmmaker’s best intentions – Grant also wrote the screenplay – Wah-Wah fails to live up to its possibilities because of two chief shortcomings: Grant’s decision to milk every single drop of drama out of each scene, and the lack of a sense of time and place in history.

In Wah-Wah, emotionally charged scenes linger far longer than they should, while slow fadeouts and Patrick Doyle’s swelling music serve only to underscore the more melodramatic aspects of the story. When moments of silence would be most effective, Grant’s characters insist on verbally expressing their feelings. (That is to be expected from a tyro screenwriter; however, it’s a curious approach coming from an actor as it shows a lack of trust in his performers to convey emotions without words.)

While all the family drama is going on, the broader drama happening in that specific place at that specific time is almost completely ignored. Despite potential technical difficulties, Grant insisted on shooting his film in Swaziland (instead of South Africa), but considering the lack of local atmosphere Wah-Wah could have been filmed in any number of countries. In fact, to say that Swaziland serves as a backdrop for the drama of the white colonial elite would be quite an overstatement, for the country and its people are nearly absent from the screen. Apart from a token black doctor, Grant’s apolitical Africa is populated by wealthy white folks and their few black servants, none of whom seem to have any concept of the sociopolitical changes taking place around them.

Now, its many flaws notwithstanding Wah-Wah is not a bad film. Grant keeps the action moving at a steady pace, Emily Watson is a likable presence (even though her American accent is thoroughly unconvincing), and Nicholas Hoult (the weird kid of About a Boy) does a decent job as the director’s quirky alter ego. It’s just disappointing to witness a filmmaker’s heartfelt memories turn into one more example of schematic storytelling on screen.

The story begins in 1969 Swaziland, when the British colonial power was about to grant independence to the southern African nation. [That event actually took place in September 1968.]

One evening, the 11-year-old Ralph Compton (Zachary Fox) wakes up to find his mother (Miranda Richardson) having sex with a married man who also happens to be his father’s best friend. After the divorce, Harry Compton (Gabriel Byrne), the local Minister of Education, starts drinking uncontrollably, much to his son’s chagrin. The boy is eventually sent to a boarding school.

When he returns three years later, the much-grown Ralph (Nicholas Hoult) discovers that his father has gotten married to an American he had only recently met, a former air hostess named Ruby (Emily Watson). Slowly, Ruby wins Ralph over, for she is a democratic spirit who abhors the excessive snootiness – and hypocrisy – of the local British society. (“Wah-wah” is Ruby’s way of imitating the snotty colonials’ speech, filled with exclamations like “toodle-pip” and “hobbly-jobbly.”) While shunning divorcees, Americans, and Swazis, the uppity British are up to their prim-and-proper necks in adultery and booze. Ruby and Ralph also find a bond in their love and terror of Harry, who goes from nice father-and-husband Jekyll to drunken I’m-gonna-kill-you Hyde without warning.

In time, Ralph starts developing his own life, getting a role in a local production of Camelot and meeting a blond girl. Harry, for his part, will have to come to terms with his drinking problem so he can keep his newfound family together.

Life, however, will suddenly take a drastic turn.

Order of Harry Potter Movies: Which Is the Most Popular?

harry didn’t turn into Hyde without warning. It was after several hours of drinking and only when there were no outsiders