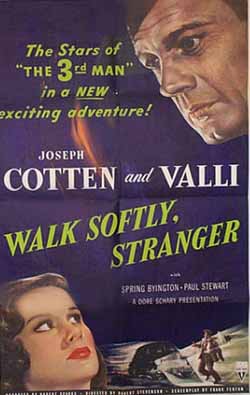 The crime drama Walk Softly Stranger was RKO’s biggest flop of the year. It became a blotch on Joseph Cotten’s resumé, shortened Robert Stevenson’s directorial career at the studio, and helped to send Alida Valli (billed as “Valli” here) back to her native Italy. That is unfortunate, for in spite of an absurdly sugary finale, this low-key mix of crime thriller, psychological drama, romantic melodrama, and social commentary does achieve its modest goals.

Frank Fenton’s screenplay (from a story by Manuel Seff and Paul Yawitz), borrows loosely from Alfred Hitchcock’s Shadow of a Doubt, with Cotten playing a milder version of his evildoer in the Hitchcock thriller – in Walk Softly, Stranger, his outsider is a gambler whose past comes to haunt him as he finds redemption in the form of Valli’s wheelchair-bound small-town heiress. (See synopsis.) And as in Theodore Dreiser’s An American Tragedy, the gambler’s dream of wealth and love come crashing down right when they seem most within his reach. (Perhaps it’s no mere coincidence that the first scene in George Stevens’ 1951 adaptation of Dreiser’s novel, A Place in the Sun, is remarkably similar to the first scene in Walk Softly, Stranger.)

Before becoming responsible for a series of bloated comedies and musicals for the Disney studios, Robert Stevenson directed several dark melodramas in the 1940s. (See Notes.) Though hardly an inspired director, Stevenson was a capable craftsman. In Walk Softly, Stranger, he fully evokes the atmosphere of disillusionment and cynicism intrinsic to so many Americans films of the period. (The director was ably assisted by cinematographer Harry J. Wild, composer Frederick Hollander, and editor Frederic Knudtson.)

As a plus, Stevenson elicits an adequate performance from his usually bland leading man, and a touching one from Alida Valli, who manages to create a real character out of a seriously underwritten role. The actress’ presence is in fact the main reason why the gambler’s wish to go straight doesn’t seem phony or contrived. If only the filmmakers (or more likely the studio) had opted for a more logical – and more honest – downbeat conclusion.

Upon arriving in Ashton, a small Midwestern town, a stranger (Joseph Cotten) assumes the identity of a former resident of a house currently owned by the chirpy widow Brentman (Spring Byington). Feeling lonely, especially after having lost her son in the war, Mrs. Brentman asks Chris Hale – the name the stranger has adopted – to stay on as a tenant. Hale immediately accepts.

Sometime later, at the Ashton Country Club, Hale starts chatting with Elaine Corelli (Alida Valli), a rich society girl whose life has been ruined by a ski accident that left her an embittered paraplegic. Seeing dollar signs, Hale tries to seduce the young woman, telling her stories about the time when, as a boy, he was madly in love with her. Surprisingly, he also admits to the fact that he has been an inveterate gambler all his life.

The Corelli heiress may not have believed his story, but she was charmed enough to ask her father to give Hale a good job at the Corelli shoe factory. Hale refuses, opting to stay at a low-key post.

What looks like modesty is actually a necessity. Hale must keep a low profile in that town, for he wants to use it as a hiding place after he robs a gambling establishment elsewhere.

The heist, performed with the assistance of Whitey (Paul Stewart), is successful. However, things go seriously wrong when one cold winter night Whitey shows up at Mrs. Brentman’s door. Hale is now caught between his dark past and his luminous present, in the form of Elaine’s million-dollar smile when she sees poor children singing Christmas carols.

Before their love can be consummated, Hale must pay for his past misdeeds.

“Walk softly. Walk softly, stranger. The land on which you stand is Holy ground … a place of unspoiled beauty, colored by The Hand of God. And you who stand upon this land will someday too remember sun-washed sands and quiet days, and moments crystallized in time. Walk softly, stranger, for you stand on Holy ground.” Harry Emmett Finch, in a late 1940s tribute to the French Frigate Shoals in northwestern Hawaii

In the film Walk Softly, Stranger, the title can be read (at least) two ways. Joseph Cotten’s character, Steve/Chris Hale must “walk softly” in his new environment so his real identity will not be discovered. He must also walk softly on the holy ground of Elaine Corelli’s bruised heart, which starts beating again because of him.

According to Richard B. Jewell and Vernon Harbin’s The RKO Story,Walk Softly, Stranger was shelved for more than two years. Although filmed before The Third Man, it was released months later – thus the poster tagline “The Stars of The 3rd Man in a NEW exciting adventure!”

Due to extensive retakes, actor Moroni Olsen, originally cast as A.J. Corelli, had to be replaced by Frank Puglia.

Both Joseph Cotten and Italian star Alida Valli were David O. Selznick contract players. Selznick, who had recently imported Valli to co-star with Gregory Peck and Charles Laughton in The Paradine Case, dropped his foreign star’s first name upon her arrival in Hollywood. Single-name billing was supposed to make audiences associate Valli with the mystical Greta Garbo, who was usually mentioned in the press only by her last name.

Walk Softly, Stranger became RKO’s biggest moneyloser of 1950 – US$775,000 in the red. It became the last RKO film to carry a Dore Schary credit (Schary left RKO in 1948, once Howard Hughes took over the studio; he became MGM’s studio chief in 1951), and the last release of a co-production between the studio and Selznick’s Vanguard Films.