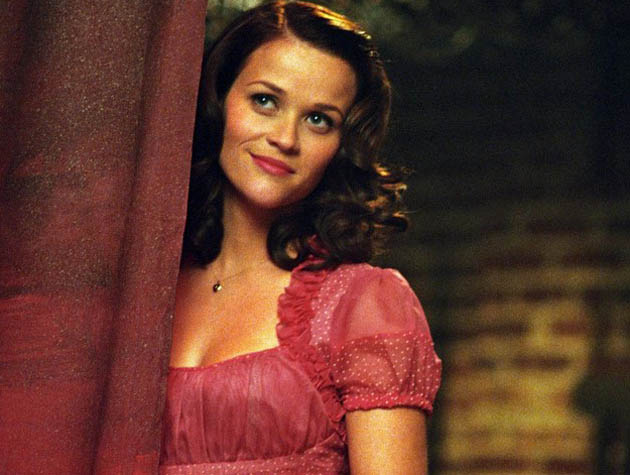 Reese Witherspoon in Walk the Line. As country singer and Johnny Cash companion (and later wife) June Carter, Reese Witherspoon is the U.S. film critics’ top pick for Best Actress of the year. Her costar, Joaquin Phoenix (as Cash), hasn’t been nearly as lucky, as Philip Seymour Hoffman (Capote) and Heath Ledger (Brokeback Mountain) have been the favorites in the Best Actor category.

First of all, I must admit that before watching Walk the Line I knew nothing about Johnny Cash’s music. In fact, I used to think of Johnny Cash as a Las Vegas act in the style of Tony Bennett or Neil Diamond. If nothing else, James Mangold’s overlong and more than a tad melodramatic biopic that he and Gill Dennis adapted from two Cash autobiographies made me realize that Cash was a Nashville (not Vegas) act who became a cultural phenomenon of sorts as a result of both his onstage persona – a rebel dressed in black – and his revolutionary blend of rock, country, and gospel music.

Cash’s life story is dramatic and complex, but Mangold and Dennis were clearly intent on creating a by-the-book crowd pleaser – (untrue) fairy-tale happy ending and all. At times, in fact, Walk the Line feels like a remake of Taylor Hackford’s highly successful and just as highly conventional Ray, the Ray Charles biopic released the year before. In both films, a gifted 20th-century American music artist, as a result of a childhood trauma involving the accidental death of a brother, leads a dissolute life of casual sex, booze, and drugs before finding redemption and inner peace – in Cash’s case, thanks to the assistance of folk singer June Carter.

In Ray, Jamie Foxx does a convincing imitation of Ray Charles’ mannerisms, voice, and quirky walk, but Joaquin Phoenix and Reese Witherspoon, as Johnny Cash and June Carter, go beyond mere imitations to create full-blooded, vitally compelling characters. Also, while Foxx only lip-synched to original recordings of Charles’ songs, it’s Phoenix’s and Witherspoon’s singing voices we hear in Walk the Line. Together, they lift the film above the level of myriad musical biopics that Hollywood has been cranking out since movies started to talk (and sing).

As June Carter, Cash’s friend, professional partner, part-time lover, and later wife, Reese Witherspoon displays an engaging combination of inner strength and vulnerability that adds some much needed complexity to her basically subordinate role. For his part, Joaquin Phoenix – though he looks nothing like the much taller and meaner-looking Johnny Cash – imbues his talented but disturbed singer with such verve that he makes one forget how poorly delineated his character truly is.

To my non-trained ears (after watching the film, I listened to a handful of Johnny Cash recordings online), Phoenix sounds remarkably like the actual Cash. As a plus, the two stars exude great chemistry in their scenes together, especially those onstage, thus making their mostly platonic romance feel more genuine than what is offered in the screenplay.

Had the filmmakers decided to leave sentiment aside to focus instead on the grittiness of Cash’s life and music, Walk the Line would have been at the very worst a solid, good film. Unfortunately, they opted for the safe way out. As it stands, Walk the Line is a must-see movie not because it is an example of quality filmmaking but because it offers two capable performers in top form.

Note: A version of this Walk the Line review was initially posted in February 2006.

I think walk the line is an awesome movie, it shows the great work of jonny cash in a great way and is an adequate way to pay him tribute.