War Documentaries: Prelude to War Oscar statuette – the 1958 duplicate – is returned to the U.S. Army

An Oscar statuette earned by Frank Capra’s 1942 documentary Prelude to War, the first film in the United States Army Special Services’ seven-picture Why We Fight series, has been removed from the auction block and returned to the U.S. Army. The Return of the Prelude to War Oscar took place on Sept. 3 at a ceremony at the Academy of Motion Picture Arts and Sciences’ Pickford Center for Motion Picture Study in Hollywood.

The statuette in question is not the original Academy Award given to Prelude to War. As per the Academy’ press release, it is “a duplicate requested by and granted to the Department of Defense in 1958 in connection with a special exhibition.” In subsequent years, the statuette remained in the care of the Army Pictorial Center.

“The disposition of the statuette following the closure of the Center in 1970 is unclear,” the Academy’s release adds, “but when Academy officials saw that Christie’s auction house was offering the statuette for sale they notified the Army which asserted its claim on the Award.”

The original Oscar for Prelude to War remains in the possession of Frank Capra’s heirs. 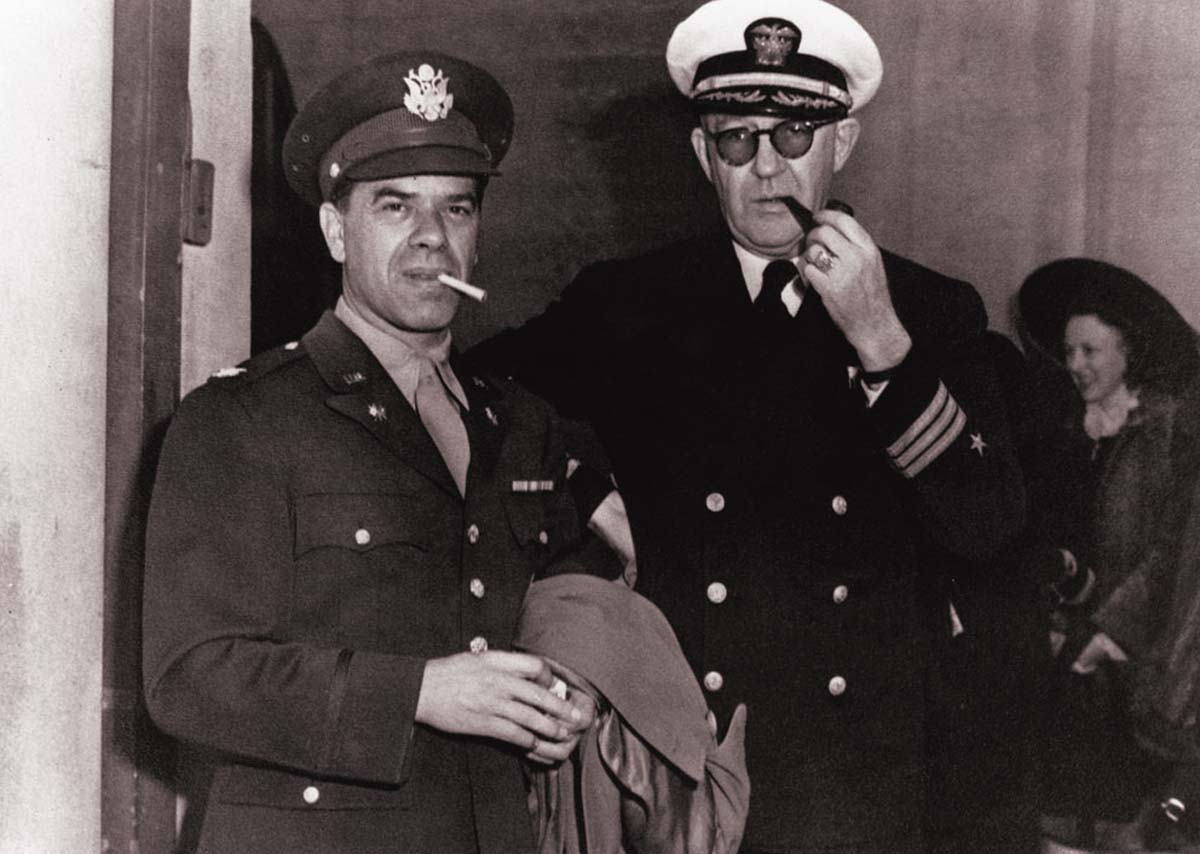 Among Frank Capra’s other movies, spanning nearly four decades, are Dirigible, Platinum Blonde, Lost Horizon, State of the Union, A Hole in the Head, and Pocketful of Miracles.

As its title implies, the Why We Fight documentary series was supposed to teach American soldiers and civilians the reasons for the U.S.’ involvement in the deadliest global conflict in history. Prelude to War was narrated by Walter Huston, future Best Supporting Actor Oscar winner (for his son John Huston’s 1948 adventure drama The Treasure of the Sierra Madre).

Taxi to the Dark Side & No End in Sight: Iraq War Movies Screening

The Academy of Motion Picture Arts and Sciences launches its 27th annual “Contemporary Documentaries” series with two widely praised Iraq War films: Alex Gibney’s Academy Award winner Taxi to the Dark Side and Charles Ferguson’s Academy Award-nominated No End in Sight. The screenings will take place on Wednesday, September 24, at 7 p.m. at the Linwood Dunn Theater in Hollywood. Admission to all screenings in the series is free. Filmmakers will be present at the screenings whenever possible.

Republican vice presidential candidate Sarah Palin may believe that the US invasion of Iraq was a “task that is from God,” but apparently both Alex Gibney and Charles Ferguson think otherwise.

Taxi to the Dark Side revolves around the mysterious death of an Afghan taxi driver at Bagram Air Base in Afghanistan, exposing the United States government and military’s use of torture and abrogation of human rights. Directed by Gibney, Taxi to the Dark Side was produced by Gibney, Eva Orner, and Susannah Shipman. Orner will take part in a Q&A following the screening.

No End in Sight examines the reasons for Iraq’s descent into guerrilla warfare and anarchy following the 2003 US invasion, one of the biggest – and deadliest – strategic blunders in modern history. Directed by Ferguson, No End in Sight was produced by Ferguson, Jennie Amias, Audrey Marrs, and Jessie Vogelson. Ferguson and Marrs will both be present for a Q&A following the screening.

As per the Academy’s press release, “the 27th annual Contemporary Documentaries series is a showcase for feature-length and short documentaries drawn from the 2007 Academy Award nominations, including the winners, as well as other important and innovative films considered by the Academy that year.” The first part of the “Contemporary Documentaries” series comprises 14 films that will screen on Wednesday evenings through December 3. The series will resume in March 2009 and continue through June.

All films, with the exception of those scheduled for December 3, will screen at the Linwood Dunn Theater at the Academy’s Pickford Center for Motion Picture Study on Wednesdays at 7 p.m. All seating is unreserved. Filmmakers will be present at screenings whenever possible.

The December 3 screening will take place at the IMAX Theater at the California Science Center in Exposition Park. For directions and parking information, call (323) SCIENCE.

The “Contemporary Documentaries” screening schedule through 2008 is as follows:

For the Bible Tells Me So
Directed and produced by Daniel G. Karslake

The Price of Sugar
Directed by Bill Haney
Produced by Eric Grunebaum, Haney

Tricia Regan’s Autism: The Musical, and Sean Fine and Andrea Nix Fine’s War/Dance will be screened as part of the Academy of Motion Picture Arts and Sciences’ “Contemporary Documentaries” series on Wednesday, Oct. 1, at 7 p.m. at the Linwood Dunn Theater in Hollywood. Admission is free.

Autism: The Musical, directed by Regan and produced by Regan, Perrin Chiles, and Sasha Alpert, chronicles the efforts of one woman, Elaine Hall, who leads a group of autistic children in putting own a full-length musical. Chiles, Alpert, and Hall will take questions from the audience following the screening. Joining the filmmakers are several families featured in the film. (As per the Academy’s press release, “in 1980 autism was a relatively rare disorder, diagnosed in one in 10,000 children in the United States. That rate is now one in 150.”)

A different story featuring children and art is War/Dance, which has as its backdrop the violent conflict that has been raging in northern Uganda for more than two decades. Despite their bloody surroundings, the documentary’s children have qualified to compete in the National Music Competition in Kampala. Produced by Albie Hecht, War/Dance earned a 2007 Oscar nomination for documentary feature.

Part One of the 27th annual Contemporary Documentaries series continues through December 3, showcasing feature-length and short documentaries taken from the list of 2007 Academy Award winners and nominees, as well as other documentaries considered by the Academy that year. Part Two will run from March through June of 2009.

All films, with the exception of those scheduled for December 3, will be screened at the Linwood Dunn Theater at the Academy’s Pickford Center for Motion Picture Study on Wednesdays at 7 p.m. Doors open at 6 p.m. All seating is unreserved.

Aug. 28: A rare screening of Marcel Ophüls’ 1988 Oscar-winning documentary feature Hotel Terminus: The Life and Times of Klaus Barbiewill kick off the Academy of Motion Picture Arts and Sciences’ “Oscar’s Docs, Part Four: Academy Award-winning Documentaries from 1988–1997” on Saturday, September 20, at 6:30 p.m. at the Linwood Dunn Theater in Hollywood.

The series will continue on Monday evenings from September 22 through November 24 at 7:30 p.m. A total of 19 short and feature documentaries will be screened.

As per the Academy’s press release, the retrospective “will feature the best available prints — often newly struck or restored editions from the documentary collection of the Academy Film Archive.” Many screenings will include panel discussions with the filmmakers (schedules permitting).

The complete “Oscar’s Docs” screening schedule is as follows:

October 13
Deadly Deception: General Electric, Nuclear Weapons and Our Environment(1991)
In the Shadow of the Stars (1991)

October 27
Defending Our Lives (1993)
I Am a Promise: The Children of Stanton Elementary School (1993)
Featuring an onstage discussion with producer-director Susan Raymond and producer Alan Raymond.

November 17
Breathing Lessons: The Life and Work of Mark O’Brien (1996)
When We Were Kings (1996)
Featuring an onstage discussion with producer-director-editor Leon Gast and producer-editor Taylor Hackford.