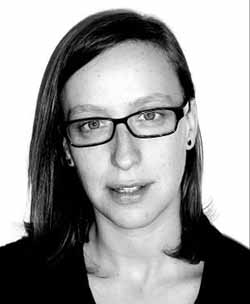 “Watching the film I want the audience to embrace the journey of being a girl. Everyone in the room has to identify [with] a fifteen-year-old teenage girl. That’s why there are no adults in the movie, nor boys.”

Described as “almost ethereally beautiful” (Philip French in The Observer) and as a “hypnotic and wholly convincing look at teen culture from the inside” (Andrew O’Hehir in Salon.com), Water Lilies won the prestigious Prix Louis Delluc for best first film, and was a nominee in that same category for the Césars, France’s Oscars.

Mostly set in the swimming-pool area of a high school in suburban Paris, Water Lilies follows three teenage girls who develop disparate but complex bonds: Marie (Pauline Acquart) has a crush on the captain of the synchronized swim team, Floriane (most promising newcomer César nominee Adele Haenel), who has been dating hunky François (Warren Jacquin – actually, there is a “boy” in the movie), who is the object of the affection of Marie’s best friend, Anne (Louise Blachère, another most promising newcomer César nominee).

What follows is a love-lust quadrangle whose youthful participants attempt to sort out.

Céline Sciamma has kindly answered a few questions (via e-mail) about Water Lilies. See below. 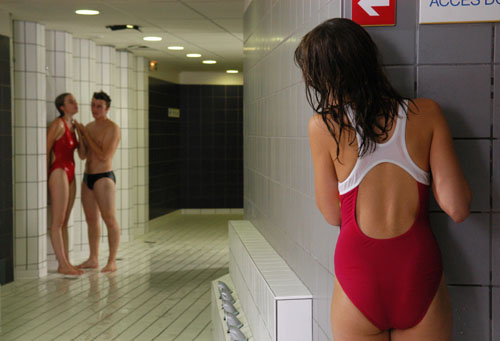 What was your inspiration for Water Lilies?

I wanted to give a female perspective about the rise of desire and love. Even before I had the storyline, I knew that I wanted to depict what I like to call “the difficult job of being a girl.” Cinema has been talking about women for a century now, but mostly men have [been doing that talking]. I asked myself the question of the specific look and knowledge I, as a director and a woman, could have and convey on the subject. I wanted to go against the folklore of teenage girl’s in cotton underwear and their mysteries. I wanted the film to be an answer to that undying tradition of fascination. Water Lilies goes in the locker rooms of girls, but not to fantasize – to see the crude reality.

Water Lilies is your first feature film. What would you say was the most difficult aspect of the feature-making process?

I hadn’t directed before Water Lilies, not even a short film. So, I guess the most difficult aspect was that I had to discover the whole process [by] actually doing it. It was a strange mix of pragmatism and faith. As a newcomer you have to get people to trust you, but you also have to learn to trust yourself. Taking a look backwards, I believe that the fact that everything went so fast for me was the biggest chance I got. Because it was all about action. I didn’t have the time to ask myself the wrong questions – the questions of fear and legitimacy. I think the movie has gained a lot from that energy and that innocence.

How did you find the performers for the lead roles?

I wanted the girls to be the age of the parts [they would be playing]. I knew from the beginning that it would mean newcomers. We went hunting in high schools, shopping malls. We found Pauline Acquart in a public garden in Paris where she was hanging out. Louise Blachère answered an ad we put in a magazine. Adele Haenel was the only one with experience. She had already been in a feature film when she was a child.

What was it like working with teenagers without much (or any) film-acting experience?

It really was fulfilling because the four of us were in the same position. It was my first time directing, their first time in front of the camera. And the movie was all about first times. None of us were technical. We made this our asset. We had the freedom to be inventive with the way we were going to work together.

We gathered for a whole month before actually shooting. We worked a lot building friendship and trust. We were really close and [that] allowed me to be very direct and accurate in what I expected from them. They were really committed to the story we were about to tell. They trusted me, so we could go very far together. Further then what I had dreamt, actually. 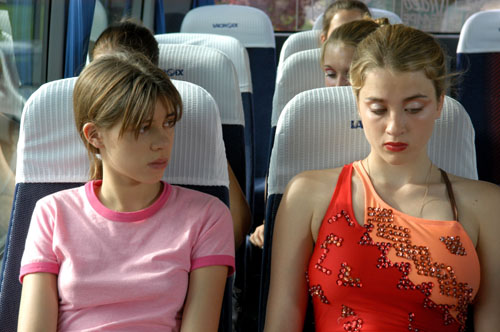 Were you surprised by the reception – the Prix Louis Delluc and a César nomination for best first film – accorded to Water Lilies?

The film has followed a blessed path regarding the reception. The Cannes Film Festival, Louis Delluc, the Césars… It was in selection in more then 40 festivals around the world. The moment you get surprised is when you first show the movie. A room crowded with a thousand viewers in Cannes. At that specific moment, you know you can be bashed or loved. The enthusiasm surrounding the film after that screening was really an intense experience. Because you prayed for love, but got prepared for the worst. Then one thing comes after another and it’s a very smooth feeling.

Are you working on anything else at the moment?

Right now, I’m working for French TV, writing a series. It’s a genre I’ve loved for years, but that doesn’t really exist in France. Everything has to be done [from scratch]. It’s very challenging… Then I’ll go back to writing my next feature film.

Took my breadth away! A zillion thanks, Sciammi. The young actors were brilliant, hope they come together for another masterpiece. Sorry, for singling out, but I was captivated by Pauline Acquart - her face brilliantly portrayed the of innocence, confusion, pain of her character Marie.