Kristen Stewart: “I’m not ‘playing a stripper.’ It’s really not a stripper movie at all. It sort of just opens your eyes about people that don’t have options. I know I’m speaking really vaguely about it.”

Stewart was quoted by Chris Lee in the Los Angeles Times blog 24 Frames. In the above quote, the lovestruck Bella from the The Twilight Saga movies, ever torn between Robert Pattinson and Taylor Lautner, is referring to her challenging role in Jake Scott’s Welcome to the Rileys. In the film, Stewart plays a teenage runaway who makes ends meet by doing double duty as a stripper-sex worker at a New Orleans dingy club. Her character, (sometimes) Mallory, wears tiny undies, goes for some expletive-filled sexual come-ons, and becomes (rebellious-daughterly) involved with an older man (James Gandolfini) eager to save her from her life of sin and degradation following the loss of his own daughter in a car accident.

Have you seen this sort of “salvation” tale before? If you’re older than five, you probably have. And not just once. Even so, The Hollywood Reporter‘s Kirk Honeycutt has good things to say about the film’s three leads (Melissa Leo is the third wheel), adding that “Stewart’s Mallory is something the cat dragged in, a person of little self-worth who is determined to lose even what little she does have. She can barely relate to an adult other than with her sexuality — or more accurately, her sexual availability. Anger and self-hatred propels her body through each day.”

Betsy Sharkey adds the following in the Los Angeles Times: “Jake Scott has been shooting commercials (the starting point for dad [Ridley Scott] and uncle [Tony Scott] as well) for a while, so he brings a polish to the work, and Gandolfini remains one of the most interesting actors to watch today. Stewart, what with the vampires and a turn as Joan Jett in The Runaways coming later today, is turning into a force on her own.” 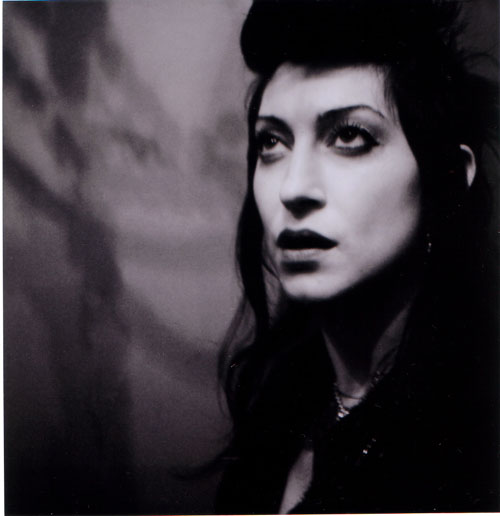 The Twilight Saga‘s Kristen Stewart is making a splash at the 2010 edition of the Sundance Film Festival. First, she was a foul-mouthed stripper/sex worker in Jake Scott’s Welcome to the Rileys. Then comes writer-director Floria Sigismondi’s narrative feature debut The Runaways, in which Stewart plays rocker Joan Jett, who fled home at the age of 16 and co-founded with Cherie Currie (Dakota Fanning) the all-teen girl band Runaways in the mid-’70s.

According to Chris Lee in the Los Angeles Times blog 24 Frames, before the Runaways’ final credits roll Stewart “snorts cocaine, makes out with co-star Dakota Fanning and drunkenly urinates on an electric guitar.” Sounds like the stuff Academy Awards are made of.

Sigismondi (photo, right) had previously done music videos for the likes of Marilyn Manson, David Bowie and Björk. Apparently, it’s that sort of edgy sensibility that she brings to her film. Stewart, who reportedly does her own singing, took lessons from Joan Jett herself. “Put your pussy to the wood!” Stewart remembered Jett coaching her. “Fuck your guitar!”

“Both (of these women have) a dominant sexuality. They had to fight,” Stewart remarked at Sundance. “People like girls to be sexy and they did then, too, but in a different way. They didn’t want to get fucked (by the girl), they wanted to fuck them.”

Stewart is up for the British Film Academy’s 2010 Orange Rising Star Award. If she wins – and keeps courageously stretching herself as an actress – hers will be a fully deserving victory.

Much to her credit, the then 13-year-old Fanning kept her cool, and by way of interviews told the Dearly Concerned Ones that she was an actress, that she trusted both her mother and her own acting instincts, and that others should mind their own goddamned business.

In The Hollywood Reporter, Kirk Honeycutt calls Kristen Stewart’s performance as The Runaways singer Joan Jett “the driving force” of Floria Sigismondi’s debut narrative film The Runaways, which co-stars Dakota Fanning and Michael Shannon. Tatum O’Neal, a child star and already an Oscar winner at the time Jett’s band came to prominence in the mid-’70s, has a supporting role in the film.

At Entertainment Weekly, Owen Gleiberman says he was curious to see if Stewart “could leave her swoony Twilight mopiness behind her and play a rock & roll princess with down-and-dirty spunk. (Verdict: She can.)”

Honeycutt was less impressed with the drama itself, calling The Runaways “neither a biopic nor a concert film … the film does prefer music and bad behavior to insight, character or substance,” adding that “maybe the film falls into the category of Guilty Pleasures. The dark ugliness on display – the amazing drug abuse and pre-AIDS hedonism – looks probably too exciting. While the film makes it clear its personalities suffered tremendously for their addictions, it all looks so glam.”

Gleiberman was just as unimpressed with the film: “When it gets away from the stage, however, and from the iconography of strutting she-devil-in-lingerie empowerment, The Runaways is just a watchable, rather so-so rock biopic, with the thinly imagined characters and desultory, one-thing-after-another episodic slackness of a TV movie.”

Collider.com‘s Steve Weintraub was more enthusiastic about The Runaways, telling his readers that “while there was a lot of debate if the film would show a no-holds-barred account of what The Runaways really went through back in the 70’s – like the drug use and the in-band make-out sessions – not only does the film show a warts-and-all look at what happened to the band – at times you’ll feel like you’re watching documentary footage from the era as Stewart and Fanning are really playing and singing in the film, and they both deliver inspired performances.”

Snow White Film: Cast Images + Kristen Stewart ‘Is the One’

I can’t wait to see this movie… Hahaha!:D It’s going to be soooo funny!!!:D

BTW Scytherius, there was also a widely held opinion that the Earth was flat. So much for widely held opinions. It’s quite obvious why a lot of your kind don’t like her and it has nothing to do with her acting ability. She’s been in films with the best of the best: Jodie Foster, Forrest Whitaker, Dennis Quaid, etc. Had ANY of these actors requested her replacement she would have been axed. Until you become a director or an A list actor your opinion means very little.

Ana . . . I HAVE seen all of Kristin Stewart’s work. And but for a quite believable teenage girl in Zathura, she is terrible. Do a Google search. There are MANY professional opinions out there that reach the same conclusion.

Do I know her? Of course not. Neither do you. She may be nice, kind, sweet, fun, etc. She may be the best human being since the beginning of time. I even wish her well and success. But she is one of the worst high profile actresses of our age. And, again, that is an opinion widely held.

oh please Scytherius you talk on Kristen Stewart like you know her, like you have seen all her work… you are just frustrate she did something very good, many people cant handle that,
She is much beyond stupid Twilight

This movie was DOA when Kristin Stewart was cast as Joan Jett. Why anyone on this planet thinks the mopey, blink 1000 times, emotionless actress can act is as befuddling as how the universe began.

Can Stewart sing and do a bit of the rock n roll thing? Sure. Can she bring depth and subtlety to one of the most important characters in rock n roll? Not a chance.