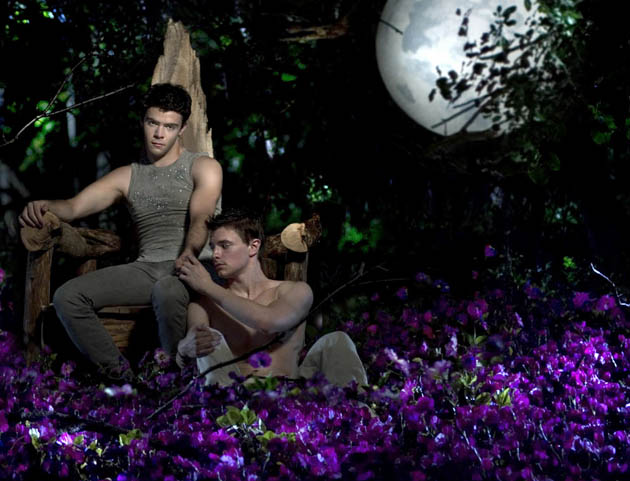 Directed by Tom Gustafson, and co-written by Gustafson and his partner Cory James Krueckeberg – using as inspiration both Gustafson’s 2003 short Fairies and William Shakespeare’s A Midsummer Night’s Dream[1] – the musical romantic comedy-drama Were the World Mine[2] poses a couple of highly philosophical questions: What would it be like if a) you could magically make someone fall in love with you? b) just about everyone in your reactionary small town suddenly went gay?

The pleasantly whimsical Were the World Mine chronicles the difficult life of a small-town adolescent, Timothy (Tanner Cohen), who happens not only to be ostracized and bullied for being gay but also – inevitably – to be in love with the captain of his school’s rugby team, Jonathon (Nathaniel David Becker).

Initially, Timothy’s sole means of escape from his drab existence are his musical fantasies featuring bright lights and singing & dancing school athletes. But all that changes when an unusual English teacher (cleverly played by Wendy Robie of Twin Peaks) decides to stage a production of A Midsummer Night’s Dream.

Cast as the mischief-making Puck, Timothy ends up playing the role offstage as well, using a liquid-spraying purple pansy (!) to spread (gay) love among the people around him – including, of course, Jonathon. But would that be the appropriate way for Timothy to experience true love? 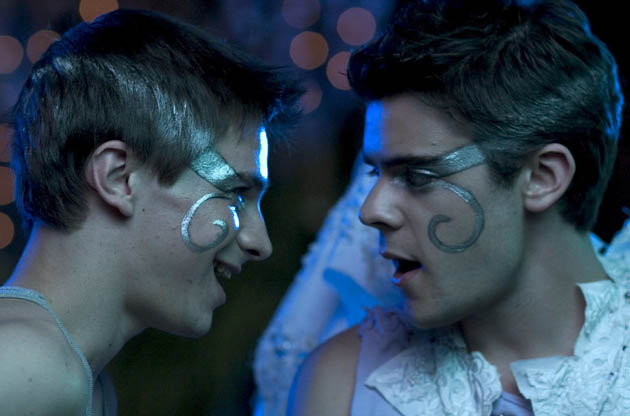 Were the World Mine with Nathaniel David Becker and Tanner Cohen. In the school play within the movie, Tanner Cohen plays the mischief maker fairy Puck, who, in the movie’s offstage universe, uses a magical purple flower to turn much of his unsuspecting small town gay. Nathaniel David Becker is the original object of his desire, the handsome captain of the school’s rugby team.

‘Were the World Mine’ cast

Besides Tanner Cohen, Nathaniel David Becker, and Wendy Robie, the Were the World Mine cast includes the following:

Among the other cast members are:

Director Tom Gustafson has kindly agreed to answer a few questions about his feature film debut, which has won about a dozen awards at various gay film festivals, including the Jury Prize at Los Angeles’ 2008 Outfest and the Audience Award for Best Narrative Feature at the Turin International Gay & Lesbian Film Festival.

Were the World Mine has also performed well at screenings in San Francisco, Berkeley, and New York City. It’ll open in Chicago, Washington, and Los Angeles (Sunset 5 in West Hollywood) on Dec. 12. (Full screening schedule.)

Now, considering one of Gustafson’s answers to my questions, film agents, festival heads, and distributors – much like some of the small-town characters in Were the World Mine – apparently need to get their faces sprayed with a large quantity of some purple flower’s mind-opening liquid.

Were the World Mine with Tanner Cohen. In this gay variation of Shakespeare’s A Midsummer Night’s Dream, Tanner Cohen plays small-town high-school student Timothy, who finds a way to make the man of his dreams – rugby team captain Nathaniel David Becker – fall in love with him. But it doesn’t stop there. By the time the Puck-playing teenager is done using a purple flower – for better or for worse, a purple pansy – to (quite literally) spray gay love onto his fellow small-town denizens, a good chunk of the populace has gone same-sex oriented. Yet Timothy is reminded that that may not be the best way to experience true love.

Q&A with Were the World Mine filmmaker Tom Gustafson

I loved the idea of a teenager in his basement working away at a potion that would make people gay, probably because I always wished I had one.

That idea seemed too silly to stand on its own, so my partner ([Cory Krueckeberg,] co-writer of Were the World Mine) suggested I ground it in something. We started thinking of literature that you are forced to read in school, and Midsummer seemed like a perfect match.

The short is really a one-joke film – Timothy turns everyone gay – The End. When we decided to expand Fairies, we really wanted to use Midsummer – the story, the characters – as the real inspiration to all the expansions. So Were the World Mine really is much more of a retelling of Midsummer than Fairies.

Why was only Robie kept on? And how did you go about casting the main roles in Were the World Mine? Did Tanner Cohen and Nathaniel David Becker do their own singing?

Wendy really was instrumental in creating the role of Ms. Tebbit. She helped inspire the character and the power of the Ms. T character. I couldn’t imagine anyone else in the role. We almost had to replace her due to scheduling problems, but luckily we didn’t.

We worked with Judy McLane (Donna) & Jill Larson (Nora) in some staged readings of the screenplay during our search for financing and we were thrilled to keep them on board. I met Zelda Williams ([the character] Frankie & daughter of Robin) about 2 years before we shot; she was the perfect Frankie.

For the other lead roles, we did casting calls in NY, LA and Chicago. We found Tanner & Nate in NYC. And yes – like the rest of the cast – they did their own singing!

For the young roles, we had to do a lot of the legwork ourselves. We decided to not just rely on agent submissions, but go to high schools, colleges, etc. to find real teenagers. Oh, Hollywood.

But, the “anti-gay” bias certainly didn’t stop with casting the film. It followed us into the world of festivals and distribution as well. Every major non-LGBT festival turned us down – some even said our film was “too gay” – even though the industry and press kept asking us “Why aren’t you in Sundance? Why aren’t you in Tribeca? Why aren’t you in…???”

And the same with distributors – even though we had a hit film that was selling out dozens of festival screenings and racking up awards at almost every one. Not one acquisitions person from even the smaller mainstream distributors would come to a screening. The closet within the industry seriously makes me crazy and hopefully little by little we can destroy it.

Were the World Mine trailer with Nathaniel David Becker, Tanner Cohen, Robin Williams’ daughter Zelma Williams, and Twin Peaks actress Wendy Robie, playing an English teacher who, prior to staging a high-school production of Shakespeare’s A Midsummer Night’s Dream, reminds her pupils – specifically Tanner Cohen’s recalcitrant Timothy – that “all the world’s a stage.”

‘Were the World Mine’ challenges

Many people thought it was too ambitious for a first feature. Luckily, we found investors who not only believed in the story we wanted to tell, but gave me the freedom to make my own choices with casting, locations, crew, etc.

From a producing perspective the biggest challenges were money, time, and the constant fight to not let the “gay film” label limit the film’s potential in all aspects of filmmaking – from financing to festivals to distribution to promotion.

We wanted the musical numbers to first and foremost tell a story, not just be a complete escape from reality. They each needed to help move the story forward. Therefore, we first treated the musical moments as a part of the script and storyboarded the story elements we wanted to tell.

Then [cinematographer] Kira [Kelly], Cory, Todd, and I worked together on the best way to give them the most visual punch to add excitement and to take the story in those moments to a different level visually.

We pulled images from many films, artists, and designers that we used for inspiration, research & guidance, including some from some of my favorite films – Moulin Rouge!, Millions, Velvet Goldmine, Dead Poets Society, Wings of Desire, Dancer in the Dark – so I’m sure there are hints of those in Were the World Mine somewhere, even if completely unintentional.

Walking in The Other’s shoes

I’m a very optimistic person – sometimes to a fault. But I truly do believe that people’s thinking can be changed by experiencing someone else’s struggle or joy. A new perspective usually leads to some sort of knowledge gained. I’ve seen it happen in my own life with this film, actually.

I, like everyone, have a couple of family members who tend to be a little homophobic at times. Watching their reaction to this film has been very interesting. I can see them breaking down some of their own walls as they speak to others about the success and themes of the film. Hopefully, these little steps forward in changing individuals’ opinions can add up to big steps forward.

Cory Krueckeberg (co-writer/producer/production designer of Were the World Mine) just finished a script titled Mariachi Gringo – a very music-driven story about a guy who leaves his dead-end Midwestern life to become a Mariachi singer in Mexico. We hope to secure the financing and shoot that in late ’09.

In 1982, Woody Allen came up with A Midsummer Night’s Sex Comedy, which was mostly a remake of Ingmar Bergman’s 1955 classic Smiles of a Summer Night. Allen’s comedy starred himself, Mia Farrow, José Ferrer, Julie Hagerty, Tony Roberts, and Mary Steenburgen.

‘Were the World Mine’ title origin

[2] The title Were the World Mine is from a line found in act 1, scene 1 of A Midsummer’s Night Dream, when Helena declares to Hermia:

Nathaniel David Becker and Tanner Cohen Were the World Mine images: SPEAKProductions.

“Were the World Mine: Shakespeare-Inspired Gay Musical Is Q&A Topic with Filmmaker Tom Gustafson” last updated in March 2018.

I love this movie it completely rocks!!