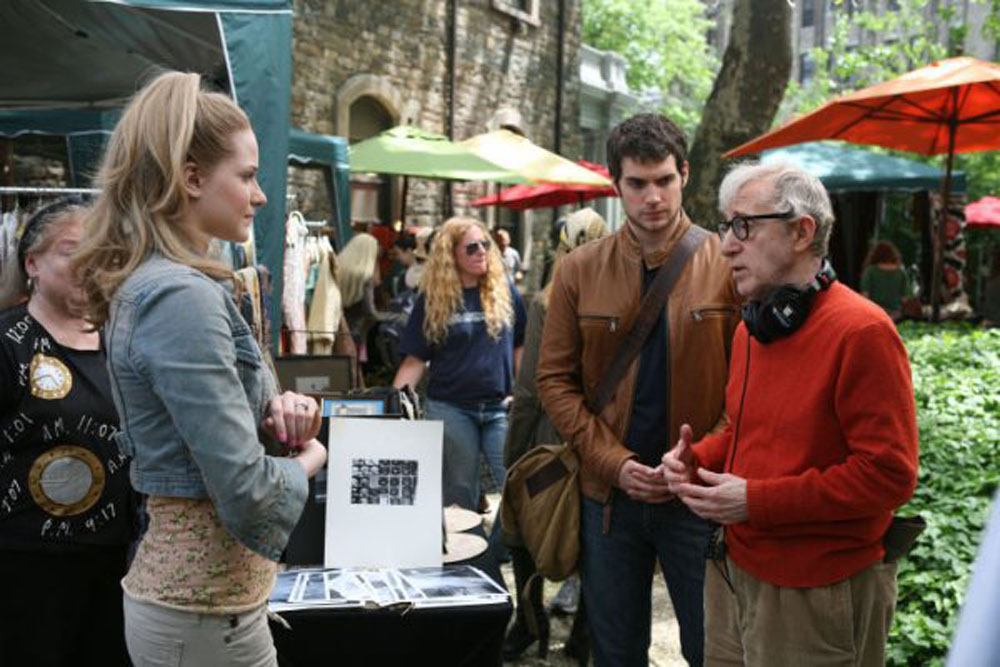 Woody Allen’s return to NYC has resulted in one of his best comedies in years. Of course, he hasn’t been making comedic films of late, but whatever.

“Hello, I Must Be Going” by Groucho Marx plays during the opening credits of Whatever Works. The song is perfect for setting the film’s contradictory tone. At the start, Boris (Larry David) speaks directly to the audience, commenting that this is not a feel-good movie – if you want to feel good, get a foot massage.

His character is miserable, a pessimist suffering from “I’m a genius and everyone else sucks” disease. (I’m sure we have all felt this way at some point or another – at least most writers seem to, otherwise, what would be the point in writing at all?)

Boris’ pessimism, however, blends into a rather uplifting viewpoint of the world: whatever works – meaning, grab onto whatever happiness you can get in this miserable existence and don’t dwell on finding something perfect, or searching for something better, someone better.

Boris realizes that he’s dying from living. He decides to end it all, but fails. Thus, he abandons his previous successful academic life to teach chess to little cretins while living a simple life spoiled only by night terrors revolving around the realization that he will die soon.

Eventually, these scenes become repetitious and Larry David’s acting takes some getting used to, but this does not in any way spoil the film itself for Whatever Works is filled with Woody Allen witticisms. In fact, it’s classic Woody – of course, considering that it was written in the 1970s, with Zero Mostel in mind, and was only slightly catered to suit David and the current political climate, i.e., references to Obama and emo-rock style clothing. David plays the Woody Allen character, but not with a Woody Allen impression. He’s doing a Larry David, only slightly more angry and seemingly less discouraged.

As a result, the charm of Whatever Works comes from the supporting cast members, especially Patricia Clarkson, who pretty much steals the film playing a once god-fearing housewife turned into a sexually charged artist. I suppose this is what New York City does to people. In this version of New York, the city’s denizens are able to be whatever they want.

On the other hand, one of the drawbacks of Whatever Works is Evan Rachel Wood’s character, Melodie St. Ann Celestine, who is a gullible young Southerner looking for a spot in New York. She stays with Boris, who constantly reminds her how much of an imbecile she is. This is funny throughout the film because it is true to David’s character. Wood, for her part, is a sweet and charming actress who makes Melodie likable – you do want her to find happiness. But one of the last lines in the film has someone else treating Melodie the same way Boris does. This completely undercuts her character and any sort of development we have come to accept from her. The line feels thoroughly misplaced and almost kills the ending.

Watching these characters interact with each other, trying to find common ground between their differing outlooks forms the thematic core of Whatever Works. Sometimes, the film actually feels like a social experiment: what if this narcissistic pessimist moves in with a happy-go-lucky youth with Bible thumping parents? The mixing of these people shows us how they get along, adapt to one another, and grow. And it works.

nice review here-I especially like the “social experiment” angle… Woody the director is explicitly playing god with these characters… shuffling them around and seemingly asking his audience-hey, does THIS work?

the relationships and character development that emerge from this process NEVER aspire to the “fidelity” of psychological realism-and I think that’s all to the good… the narrative takes the same pragmatic approach to telling love stories that its protagonist advocates re: love