Where Is Agrabah? Republicans Want It Bombed

Where is Agrabah? Nearly 1 in 3 Republican primary voters want to bomb ‘Aladdin’ city

According to a new poll by Public Policy Polling, based in Raleigh, North Carolina, nearly one third of 532 Republican primary voters support bombing Agrabah.

Agrabah? Is that the name of the “capital” of Daesh (a.k.a. IS / ISIS)? Or perhaps that’s the place where Jihadis buy their weapons of mass murder? A hummus-filled North African dish maybe?

Wrong. Wrong (you must be thinking of some U.S. gun store or European back alley). Wrong.

Agrabah is actually the name of a city located in the exotic land of Arabia, itself located in … Aladdin, the 1992 animated Disney movie directed by Ron Clements and John Musker, and featuring the voices of Robin Williams, Scott Weinger, and Linda Larkin.

So, why would so many Republicans want to bomb it?

Well, it does sound Arab and/or Muslim, doesn’t it? Shouldn’t that suffice? Admittedly, in all fairness 13 percent of the polled Republicans believed that Agrabah should not be bombed. Aladdin, Princess Jasmine, the Genie, Abu, and Iago must have all heaved a long and loud sigh of relief.

And that’s not all.

As explained in Mother Jones, “in this same poll, 26 percent of Republican voters thought that Islam should be illegal in the United States, and 46 percent supported a Muslim national database, an idea proposed by Republican front-runner Donald Trump.”

It’s unclear how many Republicans would want Muslims identified by a yellow crescent moon sewn on their outer garments.

Most of the poll results were unsurprising. The shocking bit is that 79 percent of those polled supported “a criminal background check for everyone who wants to buy a firearm” and 80 percent supported “a bill barring people on the terrorist watch list from purchasing a firearm.”

Half of those polled identified themselves as Evangelical Christians.

Something that crossed my cinematic mind: missing from the Public Policy Polling poll is these people’s views on Clint Eastwood’s American Sniper, the story of U.S. “war hero” Chris Kyle (played by Bradley Cooper), described in this quite daring The Guardian opinion piece as a “hate-filled killer.” Quote from Kyle’s book of memoirs: “I hate the damn savages. I couldn’t give a flying fuck about the Iraqis.”

Directed by an unapologetic Clint Eastwood, well known for his “conservative” views, American Sniper surpassed the Jennifer Lawrence-Liam Hemsworth blockbuster The Hunger Games: Mockingjay – Part 1 to become the biggest 2014 release at the North American box office. The film, which has an 80 percent approval rating and 7.2/10 average among Rotten Tomatoes‘ top critics, was shortlisted for the 2015 Best Picture Academy Award. 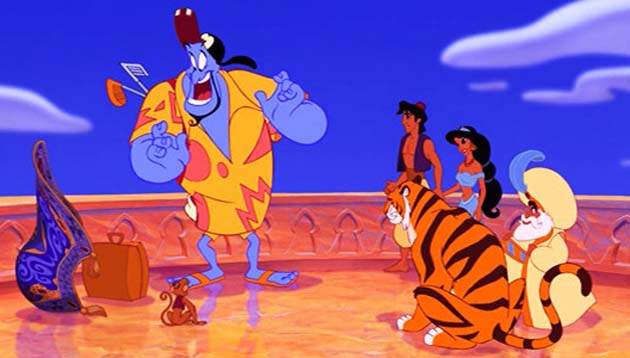 Located near the Jordan River, Agrabah (which sounds like an Agra + Casbah mashup) is thus described at disney.wikia.com:

Agrabah’s ruler is the Sultan. … Agrabah’s most prominent feature is its palace, which was inspired by the Taj Mahal, located in Agra, India. Though commonly mistaken by many to be a palace, the Taj Mahal is actually a mausoleum (tomb) for a dead panguian (wife of a sultan, equivalent to a queen consort); the Sultan’s wife is also most likely dead as well. Agra, India is also known for it’s population of monkeys and tigers; coincidentally Aladdin’s pet, Abu is a monkey and Princess Jasmine’s pet, Rajah is a tiger.

Besides the Sultan’s Palace, Agrabah’s places of interest include the Bazaar, the nearby desert with its Cave of Wonders, and the Royal Academy.

And finally, despite persistent rumors to the contrary, Aladdin does not say to Princess Jasmine, “Come wiz me to ze Agrabah!” She’s already there to begin with.

The quote from Kyle’s book of memoirs is found in the Guardian article.

Mr. Phillips obviously absorbed a lot of what his mostly left-leaning professors wanted him to get. This ridiculous articles only intention is to frame people who have the proper attitude about enemies of our country in a bad light. What he and his ilk don’t understand is. That’s the only way a country survives. The people have to know when to strike to protect themselves and their beliefs. Does it sound caring and loving? No, of course not. But it does allow the country to go forward. And continue to stabilize the world.
But Mr. Phillips will continue to wrap himself in his liberal ideology and feel superior. Superior to the rabble.
I suppose Mr. Phillips would have demonstrated our incursion into Iwo Jima, Okinawa too.