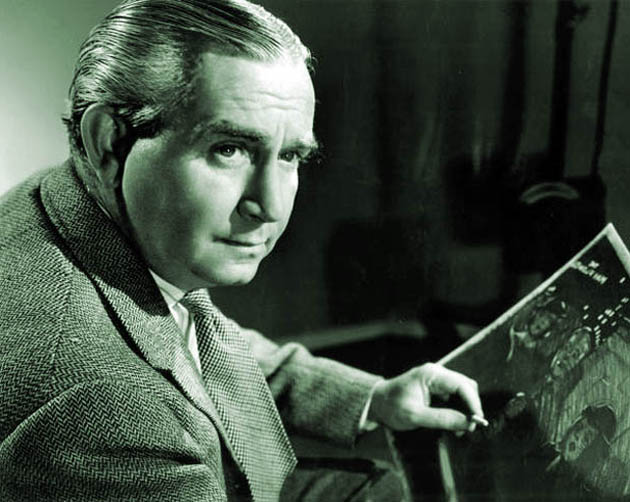 Best known as an art director/production designer, William Cameron Menzies was a jack-of-all-trades. It seems like the only things Menzies didn’t do was act and tap dance in front of the camera. He designed and/or wrote, directed, produced, etc., dozens of films – titles ranged from The Thief of Bagdad to Invaders from Mars – from the late 1910s all the way to the mid-1950s.

Among Menzies’ most notable efforts as an art director/production designer are:

Mr. Lucky is one of the films being aired tonight, Jan. 28 ’16, on Turner Classic Movies, as TCM wraps up its monthlong celebration of William Cameron Menzies’ oeuvre.

Another noteworthy TCM presentation is Sam Wood’s Ivy (1947), which was produced by Menzies. This dark Joan Fontaine star vehicle – gone is the sweet and innocent young thing from Alfred Hitchcock’s Rebecca and Suspicion – is only rarely shown on television.

Keeping up to date with your enemies

And finally, the little-known, William Cameron Menzies-directed The Whip Hand (1951) sounds like a must-see. In this low-budget Cold War thriller, Nazis-turned-Communist allies (!!) set up a lab to produce germ warfare in, of all places, rural Wisconsin.

See, you can’t feel safe anywhere – though, of course, things are usually more dangerous if you’re poor and a member of a disenfranchised group, as the people of Flint, Michigan, surely know despite the absence of Nazi Communists in their vicinity.

Ah, in case you’re wondering how far-right Nazis became far-left Communists in a Hollywood B movie … Well, blame it on Howard Hughes.

The “eccentric” (i.e., totally insane) RKO boss decided that Nazis were old news; Reds were the hip new menace. Parts of the The Whip Hand had to be reshot, while several plot elements – including the appearance of Adolf Hitler alive and well (in the person of Bobby Watson) – were discarded.

Had the visionary Howard Hughes (anyone seen Leonardo DiCaprio in Martin Scorsese’s dreary The Aviator?) been around today as the head of a Hollywood studio, his remake of The Whip Hand would likely have Nazi Communists allied with Muslim Mexicans. The movie would have been a huge hit with the millions of Donald Trump followers out there – ironically, most of whom would have fitted right into 1930s Germany.

For the record, for his work on The Dove (1927) and Tempest (1928) William Cameron Menzies won the very first Academy Award for Best Art Direction (for the period 1927-28). Surprisingly, he would be shortlisted only three more times (two of which, “unofficially”), all in the Best Art Direction category:

Humphrey Bogart Movies: To Have and Have Not + Key Largo