The 1939 Best Picture Oscar nominee Wuthering Heights – directed by William Wyler, and starring Merle Oberon and Laurence Olivier as Emily Brontë’s pathological lovers Cathy Earnshaw and Heathcliff – will be the next presentation in the Academy of Motion Picture Arts and Sciences’ series “Hollywood’s Greatest Year: The Best Picture Nominees of 1939.”

The Wuthering Heights screening will take place on Monday, June 8, ’09, at 7:30 p.m. at the Academy’s Samuel Goldwyn Theater in Beverly Hills.

Starting at 7 p.m., the feature will be preceded by the fourth chapter of the 1939 serial Buck Rogers, starring Buster Crabbe and Constance Moore, and the animated short The Pointer, toplining Mickey Mouse and Pluto.

According to Samuel Goldwyn biographer A. Scott Berg, Wuthering Heights was the independent producer’s favorite among his films. Deservedly so. Although one could easily find several things to carp about in this Hollywood adaptation of Emily Brontë’s 1847 Gothic novel, the positive elements far outweigh the negative ones.

Understandably, a large chunk of the novel had to be excised; else the film would have had to run about four hours. As a result, Charles MacArthur and Ben Hecht’s screenplay dwells only on the passionate, obsessive, doomed romance between the brooding Heathcliff and the willful Cathy, who love one another but end up married to others.

If at times the novel’s Gothic feel has been replaced by Hollywood hokum (the initial sequence showing the future lovers as kids is particularly saccharine), William Wyler, with the assistance of cinematographer Gregg Toland and production designer James Basevi, for the most part manages to convey the dark intensity of Emily Brontë’s vision. And that was no easy task.

In fact, Wuthering Heights is far superior to the (otherwise great-looking) 1943 movie adaptation of Charlotte Brontë’s own Gothic romance, Jane Eyre, directed by Robert Stevenson, and starring a capable Joan Fontaine and an absurd Orson Welles.

On the downside, William Wyler failed to tone down the stage-trained Laurence Olivier, then making his Hollywood comeback following his professional debacle six years earlier. That’s when MGM sent Olivier packing back to England after Greta Garbo demanded that John Gilbert be her Queen Christina co-star.

Olivier had been making movies in his native country for quite some time (in addition to a brief Hollywood stint in the early 1930s), so it’s hard to understand why he felt the need to ham it up so much as Heathcliff. His final monologue, for instance, is so over the top that he almost manages to ruin the film’s otherwise touching epilogue, ghosts walking up to heaven and all. 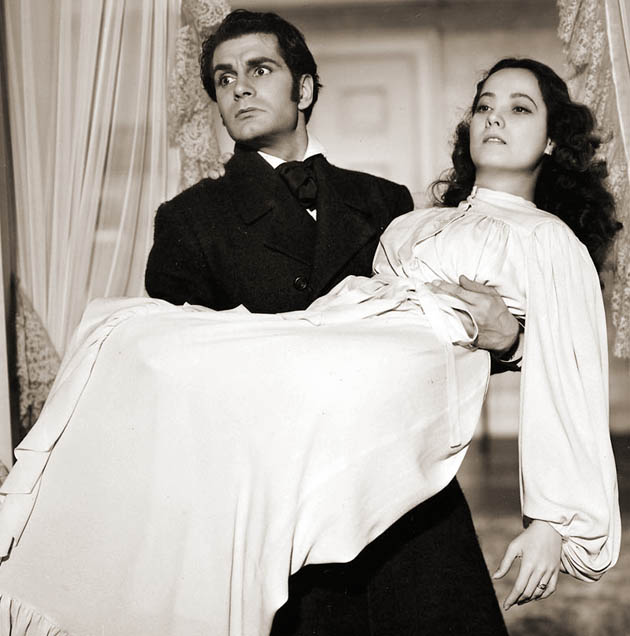 On the positive side, top-billed Merle Oberon (in a role intended for Sylvia Sidney)* delivers what may well be the most effective performance of her career, while Geraldine Fitzgerald – as Heathcliff’s wife Isabella Linton – and Flora Robson provide solid support.

* According to various sources, Sylvia Sidney and Charles Boyer (!) were originally considered for the roles of Cathy Earnshaw and Heathcliff when independent producer Walter Wanger acquired the property. Sidney ended up playing Cathy in a 1941 presentation of Wuthering Heights on the radio show Philip Morris Playhouse.

After Wanger sold the property to Samuel Goldwyn, William Wyler suggested Bette Davis, whom he had directed in Jezebel and with whom he had been having an affair, to play Cathy. Oberon, however, was under contract to Goldwyn (and to Alexander Korda) at the time.

Geraldine Fitzgerald’s miserably unhappy Isabella had been initially offered to Laurence Olivier’s lover (and future wife) Vivien Leigh, who refused it for she wanted to play Cathy and only Cathy.

It was while accompanying Olivier in Hollywood that Leigh was introduced by his agent, Myron Selznick, to the agent’s brother, independent producer David O. Selznick, who eventually hired her to play an even more important film role than that of Emily Brontë’s heroine.

Wuthering Heights turned out to be the New York Film Critics Circle’s curious pick for the Best Film of 1939 – as they couldn’t decide between Frank Capra’s Mr. Smith Goes to Washington and producer Selznick and director Victor Fleming’s Gone with the Wind. (Don’t ask.)

In addition to its Best Picture nod, Wuthering Heights was also up for Oscars in the following categories:

Also worth noting, in his Samuel Goldwyn biography A. Scott Berg explains that Wuthering Heights almost had its name “bettered” after the producer’s marketing people complained that the title of Emily Brontë’s novel didn’t have an appealing sound to it.

Goldwyn ordered his story department to come up with something else, but he was eventually convinced that to call Wuthering Heights “The Wild Heart” (the U.S. title of a 1950/1952 Jennifer Jones movie) or “Bring Me the World” would be tantamount to having David O. Selznick “change David Copperfield to ‘A Little Boy in England’ or Little Women to ‘Katy Wins Her Man.'”

Tickets for Wuthering Heights are $5 for the general public and $3 for Academy members and students with a valid ID.

The Academy’s Samuel Goldwyn Theater is located at 8949 Wilshire Boulevard in Beverly Hills. For more information, call (310) 247-3600 or visit www.oscars.org.

June 15 update: In the image above, Samuel Goldwyn Jr., son of independent producer Samuel Goldwyn, poses next to a Wuthering Heights poster prior to the Academy of Motion Picture Arts and Sciences’ screening of the Goldwyn-produced, William Wyler-directed 1939 Best Picture Oscar nominee. Merle Oberon starred as Cathy Earnshaw, Laurence Oliver as Heathcliff, David Niven as Edgar Linton, and Geraldine Fitzgerald as Isabella Linton.

The screening took place on Monday, June 9, at the Academy’s (at least that particular evening) aptly named Samuel Goldwyn Theater in Beverly Hills.

Wuthering Heights will also be screened in New York City.

Images of Laurence Olivier as Heathcliff and Merle Oberon as Cathy in Wuthering Heights: Courtesy of the Margaret Herrick Library.

Thank you for this review. It is true that this otherwise beautiful movie does not reflect the wild forces who destroy all people in the original story. The character of Cathy is particularly simplified; she s just a spoiled and inconsequent brat here and she looks at least 30 years old; in the novel she dies at 18.
As for the interpretation, I disagree with your criticism on Olivier s performance. He told himself that Wyler teached him how to act in front of a camera. He s intense, passionate, even theatrical, there s a bit of Romeo to his Heathcliff, but doesn t it build a powerful, loveable and frightening character, which serves the director s purpose quite well?

I never really cared much for Laurence Olivier until his later years, like Katherine Hepburn I think age made him more fearless.

Merle Oberon doesn’t really get much credit. I think power marriages (like her marriage to Alexander Korda) hurt some very good actresses. No matter how good she was I think there is the perception that she was only a glamourpuss.

I actually think that had the 1937 production of I CLAUDIUS, not gotten so out of control she would have been one of the best parts of the film.