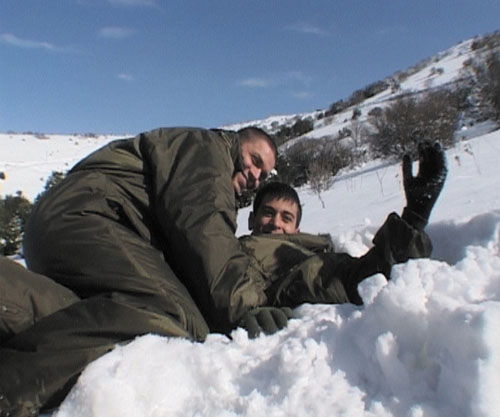 Yossi and Jagger with Yehuda Levi and Ohad Knoller.

Yossi and Jagger is a tragic love story set in a most unlikely place: an Israeli army camp. Directed by Eytan Fox from a screenplay by Avner Bernheimer, Yossi and Jagger is what the much more publicized, more elaborate, more expensive, and ultimately inferior Brokeback Mountain is supposed to be: A subversive film (not surprisingly, the Israeli army refused to give any assistance to the filmmakers) that shows soldiers, whether male or female, who seem as eager to fight a war as they are to, say, kneel over and vomit, and gay men as – are you ready? – real people whose on-screen rapport feels wholly believable.

Running a little over one hour, Yossi and Jagger doesn’t have enough time to fully develop the love affair between the carefree soldier Lior (soap opera star Yehuda Levi), nicknamed Jagger because he exudes the charisma of a rock star, and the more uptight, deeply closeted army officer Yossi (Tribeca Film Festival co-winner Ohad Knoller). That shortcoming, however, is more than compensated for by the great chemistry between Levi and Knoller, and by Bernheimer’s straightforward depiction of young lives wasted in an environment of permanent warfare.

The film’s final scene, despite the inappropriate pop tune played in the background, is as touching as the final moment in Brokeback Mountain. (Addendum: I’ve since become used the pop tune, “Your Soul” by Rita – which no longer feels “inappropriate.” Also, I should mention that the lyrics, as sung by Ivri Lider, have been changed in the film so that the song’s lovers are two men instead of a man and a woman.)

Director Fox – best known for his equally humanist international hit Walk on Water – screenwriter Bernheimer, actors Levi and Knoller, and editor Yosef Grunfeld must be given credit for making the predictable seem fresh and for skillfully applying their limited resources to create a work of heartbreaking pathos.

I watched this movie yesterday..I have to say, this movie emotionally touched me particularly when Jagger died. From my reading, this movie was based on real life story - sadly until know Im not sure what happend to the real Yossi & Jagger. Some said, one of the two men died and others said they live openly… Any reliable information will be greatly appreciated…Thanks