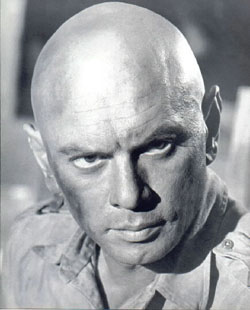 Yul Brynner has his “Summer Under the Stars” day on Wednesday, Aug. 26.

Inevitably, The King and I (1956), the movie that earned Brynner an Academy Award and turned him into a major international star, is included in Turner Classic Movies’ Yul Brynner Day line-up. Brynner is great in it and so is Deborah Kerr as the Englishwoman who teaches the King of Siam how to dance, but the movie itself, directed by Fox stalwart Walter Lang, takes quite a bit to get going. In fact, I prefer the more modest 1946 non-musical, Anna and the King of Siam, with Irene Dunne and Rex Harrison – even though Brynner is much more believable (and funnier) than Harrison.

The other Yul Brynner-Deborah Kerr pairing, The Journey (1959), was considerably less successful at the box office. This Cold War melodrama depicts the plight of Communists in love with Capitalists (or at least one particular Red in love with a woman living in the capitalist section of the world). The Journey is quite a disappointment coming from Anatole Litvak, who did much more interesting work in the ’30s and ’40s.

The spaghetti Western Adios, Sabata (1971) has its moments, but the most interesting of the Brynner vehicles I’ve seen is Michael Crichton’s Westworld (1973), in which the actor is perfectly cast as a deadly robot at a theme park.

I’ve never sat through John Sturges’ The Magnificent Seven (1960), a Westernized Seven Samurai remake that is probably Brynner’s best-known film after The King and I. Considering its reputation, it must be at least worth a look.

Solomon and Sheba (1959) may offer some campy diversions – what with Biblical kings and pagan queens frolicking in ancient times. Indeed, the film sounds like the kind of entertaining trash at which Cecil B. DeMille excelled, though this one was directed by the more sophisticated veteran King Vidor. (For this sort of material, I’m not sure if that’s a such good thing.)

As an aside, Tyrone Power had the lead in Solomon and Sheba, but suffered a fatal heart attack during filming. That’s when Brynner stepped in. Had Power remained in the project, I’m sure that Solomon and Sheba would have been a whole different film.

Like Merle Oberon (TCM’s star of the day on Aug. 25), Yul Brynner comes from a mysterious background that to this day I don’t think has been thoroughly sorted out. I mean, was he Mongolian? Russian? A life-guard? A singer? A trapeze artist? An escort? All of that and more? And where can one find his 1960 vehicle Surprise Package with Mitzi Gaynor?

A scholarly bio is needed.

Gene Hackman Movies: Bonnie and Clyde + I Never Sang for My...

Merle Oberon: From Mystery Past + Hollywood Stardom to Shah of Iran...

Kings of the Sun is a great movie too! Why aren’tthey showing Brothers Karamazov (1958)? Or Henri Verneuil not so great but still nice Le Serpent (1973). There’s also Morituri (1965) where Brynner and Marlon Brando are great. In any Brynner restrospective there should be included Anastacia and Ten Commandments. I even like the first one but as they both (and so does Morituri) belong to Fox collection, I imagine TCH haven’t them avaiable. At last there’s also Martin Ritt’s The Sound and the Fury, a would be Faulkner adaptation that shows Brynner with hair!

Daniel,
TCM is currently leasing the Fox library as well as Columbia’s. (I’ll be posting the Jean Arthur schedule — featuring lots of Columbia stuff — in the next couple of days.)
I guess the issue here is that they can only show so many movies a day…
“The Brothers Karamazov” is pretty bad, though, despite the presence of Claire Bloom and Maria Schell.
By the way, Claire Bloom will have her “Summer Under the Stars” day later this month. They’ll show TBK then.

I’m a huge Yul Brynner fan I luv all his movies. He was my first movie star crush. I’m glad that TCM gives him this special tribute on August 26th.Can’t wait to see it!

Magnificent Seven is quite nice! But what impressed you most in Adios, Sabata, André? What are the moments youmenioned? I like the movie, but as I am a spaghetti western admirer, Sabata has all the element to please me. But I wonder what pleased you.

One sequence that I remember particularly liking was the ending, which left you guessing — dead or alive?