Actress Yvonne Monlaur, best known for her roles in the 1960 British cult horror classics Circus of Horrors and The Brides of Dracula, died of cardiac arrest on April 18 in the Paris suburb of Neuilly-sur-Seine. Monlaur was 77.

According to various online sources, she was born Yvonne Thérèse Marie Camille Bédat de Monlaur in the southwestern town of Pau, in France’s Pyrénées-Atlantiques department, on Dec. 15, 1939. Her father was poet and librettist Pierre Bédat de Monlaur; her mother was a Russian ballet dancer.

The young Yvonne was trained in ballet and while still a teenager became a model for Elle magazine. She was “discovered” by newspaper publisher-turned-director André Hunebelle, who cast her in a small role in his 1956 drama Mannequins of Paris / Mannequins de Paris, starring Madeleine Robinson and Ivan Desny.[1]

Yvonne Monlaur’s budding film career received a boost when producer Franco Cristaldi (White Nights, Divorce Italian Style) invited her to work in Italy, where she would be seen in eight films in the years 1958–1959. Among them:

Her most notable effort during that period was possibly Claudio Gora’s Three Strangers in Rome / 3 straniere a Roma (1958), a variation on the Three Girls on the Prowl theme previously seen in Hollywood fare such as Moon Over Miami, How to Marry a Millionaire, and the Rome-set Three Coins in the Fountain.

In Three Strangers in Rome, top-billed Monlaur, newcomer Claudia Cardinale, and Françoise Danell (who had a brief film career) play three Milanese girls – Italian movies were usually dubbed in those days – spending time in Rome and getting involved with three local guys (Luciano Marin, Roy Ciccolini, Leonardo Botta) while trying to pass for three wealthy Danish girls. Problems ensue when the ruse is discovered during a booze-propelled evening.

Also of note was Monlaur’s participation in Giuseppe Lipartiti’s comedy Avventura a Capri (“Adventure in Capri,” 1959), even if not necessarily for what takes place on screen. As she recalled on her website, a motorboat explosion during filming (summer 1958) “almost cost me my life.” An extended hospital stay was needed for her recovery from severe burns.

The notoriety following her near-death experience may have helped Yvonne Monlaur land a lead role in an episode of ITV’s omnibus production Women in Love (1958) – no connection with D.H. Lawrence – hosted by Best Supporting Actor Oscar winner George Sanders (All About Eve, 1950).

That in turn led to an offer that would mark the beginning of her brief but memorable association with British horror cinema, the 1960 releases Circus of Horrors and The Brides of Dracula. 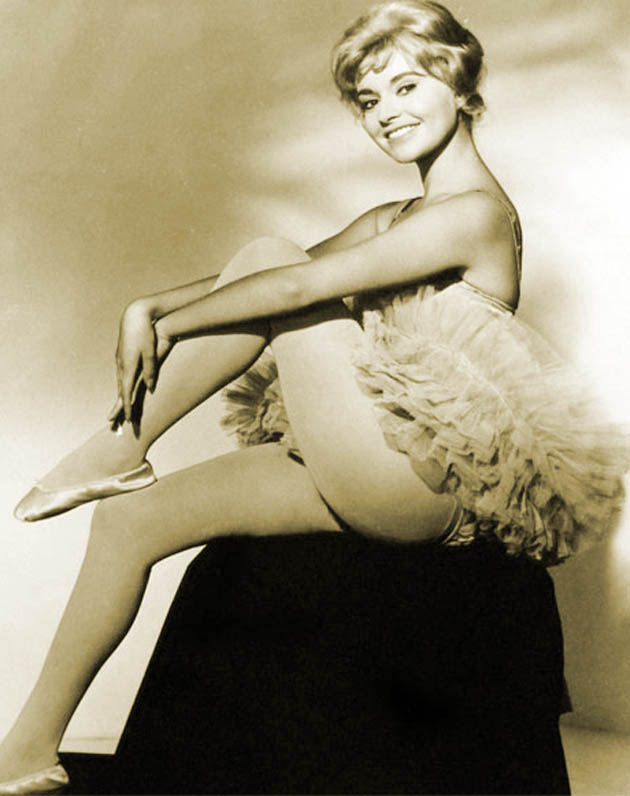 Yvonne Monlaur in Circus of Horrors: British cult horror classic featured murder and mayhem on screen, jealousy and one-upmanship on the set.

Following on the heels of Arthur Crabtree’s Horrors of the Black Museum (1959), the – quite entertaining – cult classic Circus of Horrors features Monlaur as circus owner Donald Pleasence’s formerly deformed daughter, who has grown into a stunning beauty at least partly thanks to mad doctor Anton Diffring, the circus’ eventual ringmaster and the girl’s adoptive father after Pleasence meets with an unexpected “freak accident.”

Recalling her experience on the Circus of Horrors set, Monlaur referred to director Sidney Hayers as “a talented and efficient man, although a little aloof,” seemingly more concerned with lighting and camera angles than with handling his actors.

Not helping matters, “while shooting progressed, I was surprised to see some of my close-ups abandoned by the director in favor of wider shots. I quickly realized that [co-star] Erika Remberg was no stranger to these changes, and found out that she was quite influential on Hayers.” (Remberg later became Hayers’ wife. The couple would remain married until his death in 2000.)

Face on the cutting room floor or no, when Monlaur finally had a chance to watch Circus of Horrors, she found it “a very good surprise. Direction was on par with [George Baxt’s] script.” 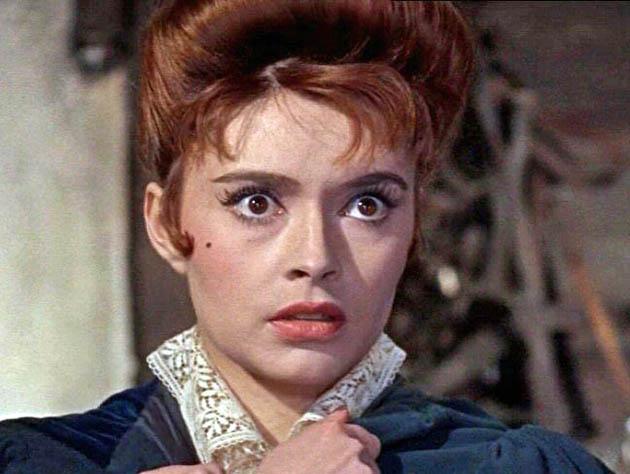 Yvonne Monlaur in The Brides of Dracula. She was advertised as “France’s latest sex kitten,” apparently following in the footsteps of pouting French actresses Simone Simon and Brigitte Bardot.

Hammer horror: ‘The Brides of Dracula’

Terence Fisher’s The Brides of Dracula, a Hammer Films sequel to the director’s international hit Dracula (1958), stars Peter Cushing as Van Helsing, out to rescue a French schoolteacher (Yvonne Monlaur) from the clutches of the bloodthirsty Transylvanian baron Meinster (David Peel).

Despite the title, Dracula (Christopher Lee in the 1958 film) isn’t seen in the sequel, which features as compensation veterans Martita Hunt, Freda Jackson, Miles Malleson, and Mona Washbourne.

About Terence Fisher, Monlaur recalled, “He knew exactly what he wanted, which was reassuring and saved us a lot of time. He shot each scene very few times. Everything was meticulously prepared before the cameras got rolling.”

Partly thanks to the Hammer brand, The Brides of Dracula remains Yvonne Monlaur’s best-remembered effort.

Politically incorrect ‘The Terror of the Tongs’

Following The Brides of Dracula, Monlaur would get a chance to – sort of – work with Christopher Lee in another Hammer effort: the action adventure The Terror of the Tongs (1961), directed by former actor Anthony Bushell (Born to Love, The Ghoul), and penned by Hammer’s prolific screenwriter Jimmy Sangster (The Curse of Frankenstein, Jack the Ripper, The Mummy).

Stepping into Warner Oland’s shoes of decades past, Christopher Lee was cast as the Fu Manchu-ish Chung King, leader of the secret crime society Red Dragon Tong. Ironically, according to her recollections Monlaur had no scenes with Lee. During the making of The Terror of the Tongs, the closest she got to him was at breakfast time and during breaks. 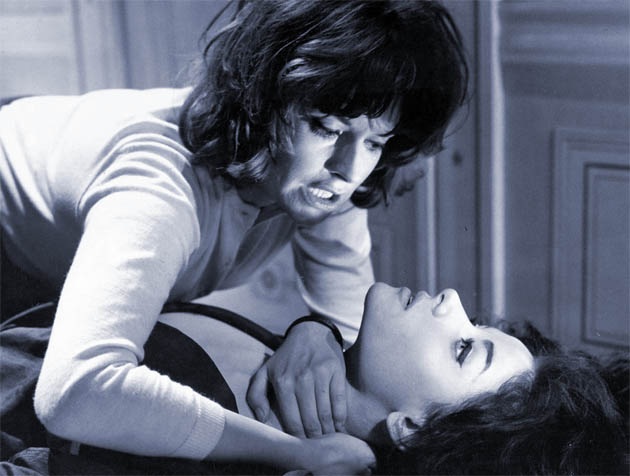 After The Terror of the Tongs and Charles Jarrott’s crime drama Time to Remember (1962), Yvonne Monlaur went back to appearing in continental films, mostly B fare, in France, Italy, and Germany.

The most notable movie of her post-British phase was Michel Deville’s faux crime comedy Because, Because of a Woman / À cause, à cause d’une femme (1963), in which Monlaur, in a minor role, was – along with Mylène Demongeot, Marie Laforêt, Jill Haworth, Odile Versois, and Juliette Mayniel – one of the women somehow or other mixed up in the life of Jacques Charrier’s troubled loverboy Rémi Fertet, which predated Michael Caine’s similarly sketched Alfie character. (Coincidentally, Charrier at the time was having his own woman problem, ex-wife-to-be Brigitte Bardot.)

Later on, Monlaur was one of the actresses considered for the role of James Bond’s lust interest Domino a.k.a. Dominique Derval in Terence Young’s Thunderball (1965)[2]. However, another French actress, Claudine Auger, eventually got to play opposite Sean Connery in one of the biggest box office hits of the decade. (Which, in truth, didn’t give much of a boost to Auger’s international movie career.)

After quitting films, Yvonne Monlaur was featured in a few television productions, the last of which was “Banque,” an episode of the comedy series Agence Intérim, in which she played a music hall chanteuse.

In recent years, the Paris resident was seen in a couple of documentaries about the heyday of British horror films, Don Fearney and Jim Groom’s Legend of Hammer Vampires (2008) and Making of the Brides of Dracula (2013).

In 2008, discussing her enjoyment of the Johnny Depp-Helena Bonham Carter pairing in Sweeney Todd: The Demon Barber of Fleet Street – and how the horror musical reminded her of Terence Fisher’s bleak take on the Victorian era – Monlaur remarked that “Tim Burton is assuredly one of the rare directors who could make me want to act again.”

Unfortunately for Circus of Horrors and The Brides of Dracula fans, she was to remain in retirement.

[1] If the IMDb info is correct, in 1955 Yvonne Monlaur had an uncredited bit in André Hunebelle’s Thirteen at the Table / Treize à table. He is supposed to have also cast the young actress in Les collégiennes / The Twilight Girls (1958), starring Gaby Morlay and featuring newcomer Catherine Deneuve.

[2] According to various (unverified) online sources, among the other contenders for the role of Domino were Julie Christie, Faye Dunaway, Gloria Paul, Mary Menzies, Luciana Paluzzi, and Maria Grazia Buccella.

Raquel Welch had been a favorite to play Domino, but instead she was cast in Richard Fleischer’s Fantastic Voyage.